(Minghui.org) During first half 2014, 413 Falun Gong practitioners in China were illegally tried in courtrooms across the country. The communist law enforcement, including the police departments, Procuratorates, and courts, used a variety of means to interfere with the lawsuit processes. They threatened the family members of practitioners, suppressed their lawyers, and held trials without notifying the lawyers.

In this report, we briefly review the statistics of the illegal trials of practitioners during the first six months as of June 26, 2014. The statistics are based on the initial trials and verdicts. Data is not included for practitioners who were tried more than once, or who appealed and were granted a second hearing.

Due to the restriction of information in China, details on some trials and verdicts were not available and are therefore not included here.

Four hundred and thirteen practitioners from 28 out of 31 provinces (including autonomous regions and municipalities) were illegally tried, as shown in Table 1 and Figure 1. No trial data was collected in Hainan Province and the autonomous regions of Tibet and Guangxi. 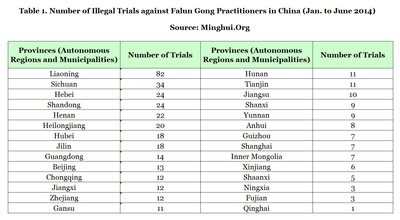 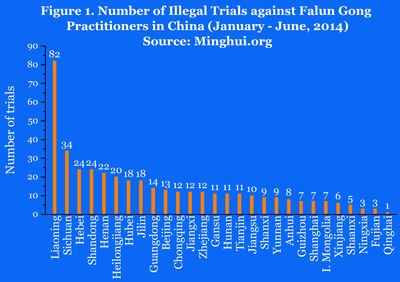 Liaoning Province ranks first, with 82 trials, with Sichuan second and and Hebei third.

Table 2 summarizes the cases in which practitioners were sentenced to more than seven years. 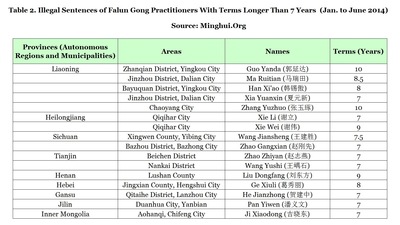