In Sevastopol, a famous tourist destination on the Black Sea, practitioners collected signatures on a petition protesting the persecution. Tourists from all over Europe and local residents were surprised that such an atrocity was still going on. They signed in support of Falun Gong practitioners' efforts to end the persecution. 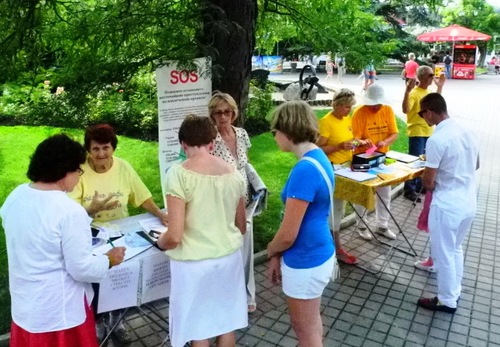 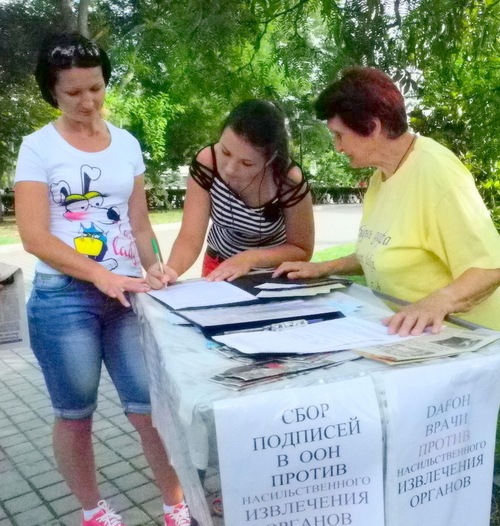 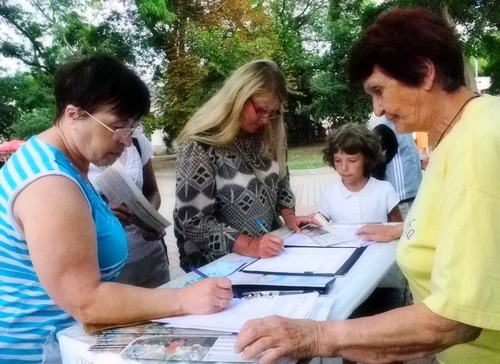 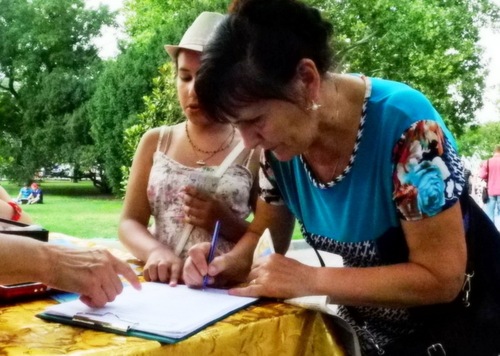 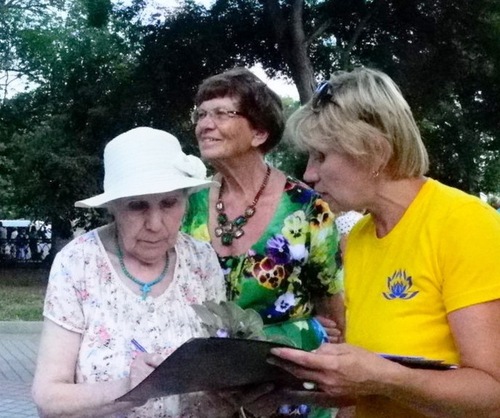 Many tourists and local residents in Sevastopol signed in support of Falun Gong practitioners' work to end the persecution in China.

A family of three quietly listened to an elderly practitioner tell them about the persecution. They were shocked to find out that Falun Gong practitioners in China had been subjected to tortures worse than those in concentration camps in World War II. They signed the petition and thanked the practitioners for their unselfish efforts. A 14-year-old who signed said he wanted to help the innocent people being persecuted.

Many people said they were touched by practitioners' compassion and sincerity, expressed their sympathy for the victims of the persecution, and condemned the CCP's unjust campaign in no uncertain terms.

Chinese Tourists Learn the Truth about Falun Gong in Poland

Starting in late June, practitioners in Poland set up booths in Warsaw and Krakow every weekend to display photos of the persecution and collect signatures. They also held a demonstration in front of the Chinese Embassy on the morning of July 20, 2014.

Thousands of tourists from Europe, America, Asia, and Australia signed in support of an end to the persecution. Many tourists from China learned the truth about Falun Gong and quit the CCP and its affiliated organizations. 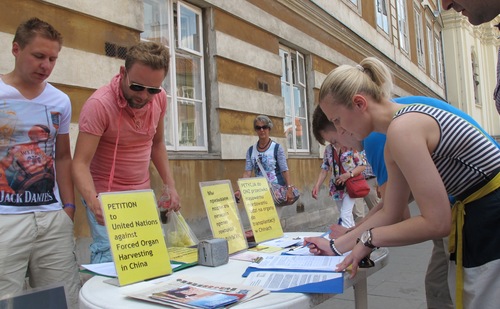 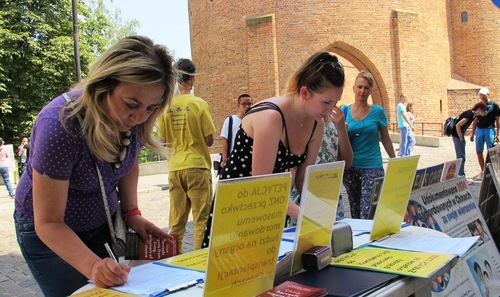 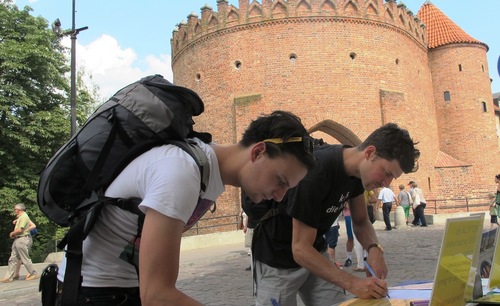 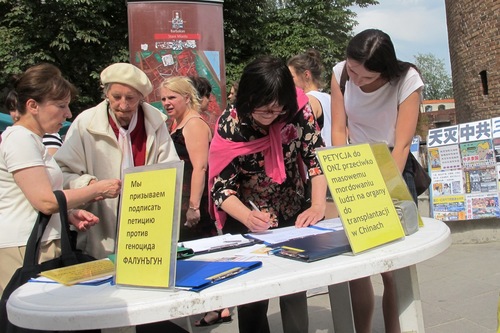 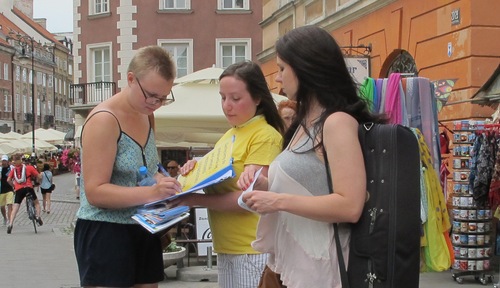 Tourists from many countries sign a petition calling for an end to the CCP's atrocity of harvesting organs from living Falun Gong practitioners. 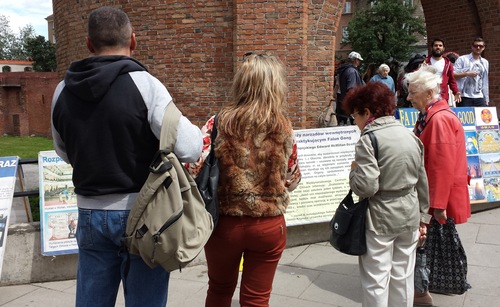 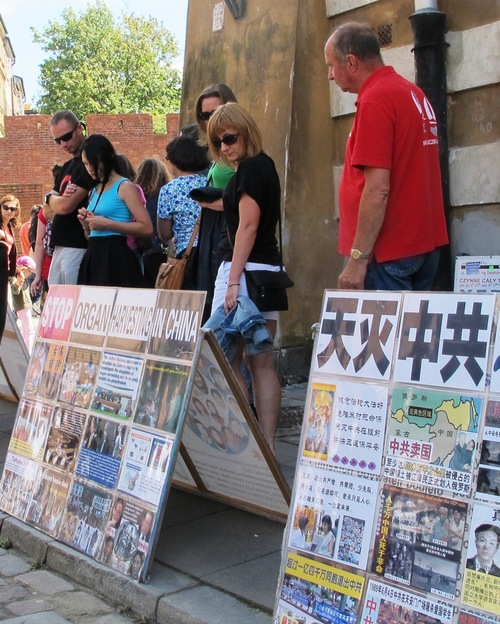 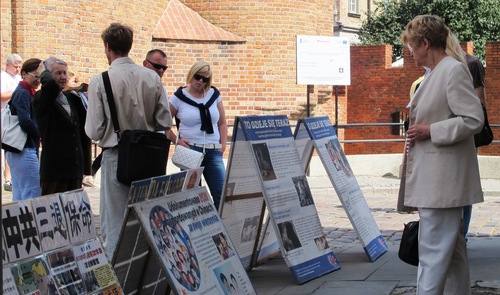 When a group of Chinese tourists approached the Falun Gong photo display in Warsaw, one of them pointed at a Western practitioner and cried out in Chinese, “Look! Foreigners practice Falun Gong, too!”

A Chinese practitioner told them, “The CCP does not dare to let people in China know that Falun Gong is practiced in more than 100 countries. It's well received around the world. The CCP is the only government that persecutes Falun Gong. These introductory materials will tell you the truth about Falun Gong. I hope you make your own judgment after you read it. Don't let the CCP propaganda fool you. More than 170 million Chinese people have quit the CCP. They are true patriots.” Some Chinese in the group who had been listening bravely walked over to get some materials to read. Some of them gave the practitioners a "thumbs-up."

A young man from Shanghai asked a practitioner dozens of questions. The practitioner answered every one in detail, including about the self-immolation on Tiananmen Square, which was staged by CCTV, the CCP's mouthpiece. The young man said, “I knew CCTV told lies. I don't trust the CCP. I haven't watched the CCTV for a long time. Falun Gong is terribly wronged. There is solid evidence of organ harvesting. The CCP is doomed. Please help me quit the Youth League and Young Pioneers. It can't be wrong to stay away from the CCP. Thank you very much! Thanks to my Poland trip!”

A Chinese student who studies in Germany happened to travel to Poland and was surprised to discover that Falun Gong was practiced in every other country. She was even more surprised after a practitioner told her about the brutality of the persecution. She finally said, “If the CCP is truly so wicked, I will not only quit it, I will also work against it. I can tell today that Falun Gong practitioners are nice people. Thank you very much! I will get a copy of your introductory materials and find out more.”

Several Chinese tourists stood across the street and took pictures of the practitioners' activity. A practitioner gave them a truth-clarification brochure, which they gladly accepted. One of them said, “We are leaving Poland soon. We would like to know more about this.”

The practitioner told them about the staged self-immolation on Tiananmen Square, the organ harvesting crime, the international lawsuits against persecutors, and the movement to quit the CCP. The young men said, “We hadn't thought so carefully before. The CCP is truly wicked. It should collapse! We would like to quit it. Thank you!”

Mr. Rosinski Krzysztof, a local resident, was deeply saddened by the brutal persecution. He wrote a touching poem after hearing about the organ harvesting. From that day on, he joined the practitioners to collect signatures every weekend. 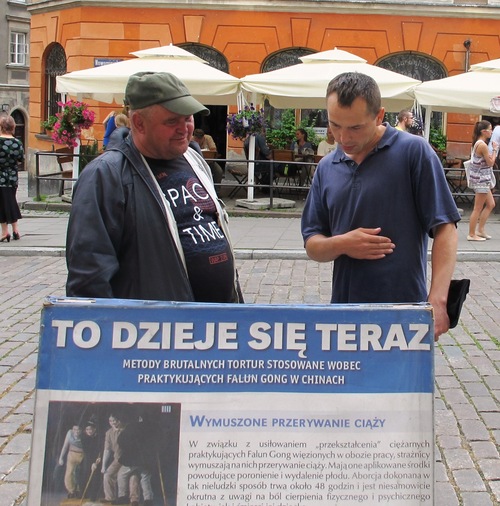 Mr. Rosinski Krzysztof tells people about the persecution in China. 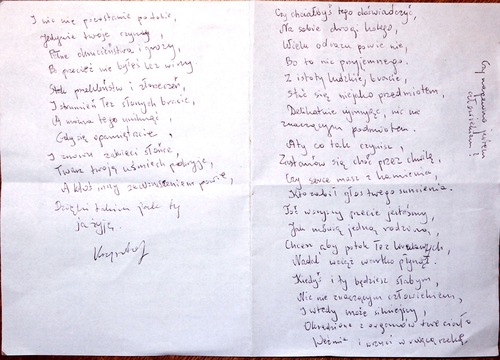 People with a conscience wish to end the persecution of Falun Gong in China. The activities in Eastern Europe gave them an opportunity to express their wish and learn the facts about a great cultivation practice.