Ireland: A March and Rally Call for an End to the Persecution, MPs Come to Show Support (Photos)

(Minghui.org) Falun Gong practitioners in Ireland gathered in downtown Dublinon July 16, 2014. They held a march and rally to mourn practitioners who have died as a result of the persecution that started in China in 1999.

They also raised awareness about the "unprecedented crime against humanity" -- the Chinese communist regime's systematic and state-sanctioned crime of harvesting organs from living Falun Gong practitioners for profit.

Two TDs (MPs) came to the rally in person to express their support. Seamus Healy, TD for Tipperary County, said that he hoped the international community and governments would help put an immediate end to the persecution. 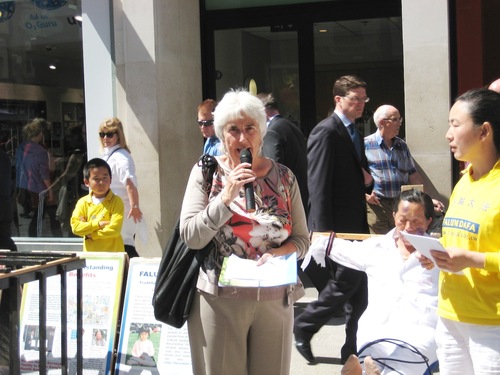 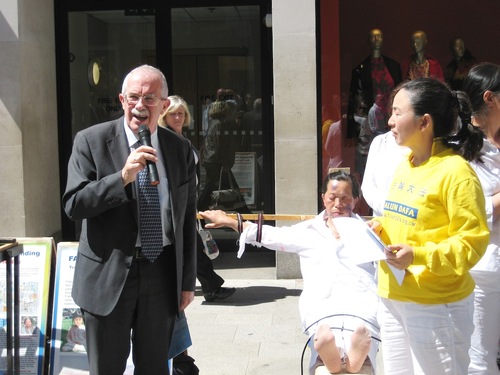 Seamus Healy, TD, called for an immediate end to the persecution.

Photographers from the two mainstream newspapers--Irish Times and Irish Independent--took pictures of the event. 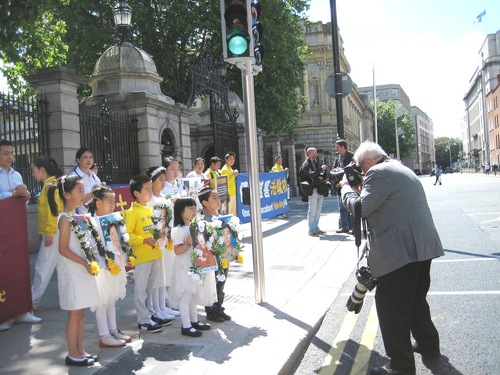 The procession pauses in front of the Irish Parliament House as aphotographer from one of the mainstream newspapers takes photographs. 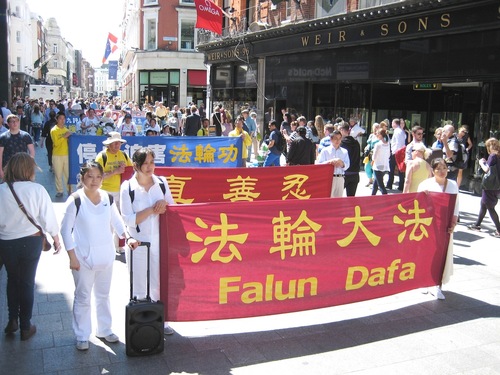 The march started off at noon in front of the Central Bank. At the front of the procession were practitioners holding banners that read "Falun Dafa Is Good," "Stop Persecuting Falun Gong," and "Support 170 Million Chinese People Quitting the CCP Organizations."

Right behind them were practitioners dressed in white and holding portraits of practitioners who have died as a result of the 15-year-long persecution in China.

The solemn and peaceful procession drew the attention of passersby, who stopped to take pictures and find out more about Falun Gong and the persecution.

When the practitioners reached the busiest pedestrian shopping area in Dublin-Grafton Street, they held a rally.

Some practitioners demonstrated the Falun Gong exercises, while others reenacted the methods employed by the CCP to torture practitioners in detention facilities in China.

Crowds of tourists from around the world who were strolling on Grafton Street during the peak tourist season in Dublin stopped to observe. Many listened to what the practitioners had to say, collected informational brochures, and signed a petition to call for an end to the persecution.

At 3 p.m. they relocated next to a shopping center near St. Stephen's Green Park and continued their efforts to raise awareness about the persecution of Falun Gong in China.

Dozens of Chinese people listened to the practitioners' explanations, understood the CCP for what it is, and chose to quit the CCP organizations.