(Minghui.org) In New York, one of the busiest cities in the world, is situated a place where people can find calmness and serenity: Tianti Bookstore in midtown Manhattan.

The fifth nine-day seminar hosted at the store concluded on July 15. Attendees exchanged contact information and made plans to join the new practitioner group exercise and Fa study on Saturdays. They stayed until the bookstore closed at 9:30 pm. Two attendees shared their experiences eagerly at the entrance of the subway station in a light drizzle

The attendees of this seminar held from July 7 to 15 included professionals such as teachers and young actors. 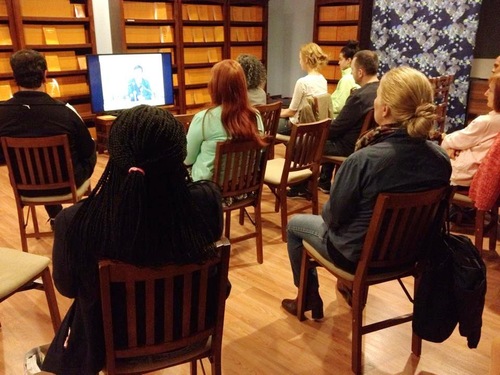 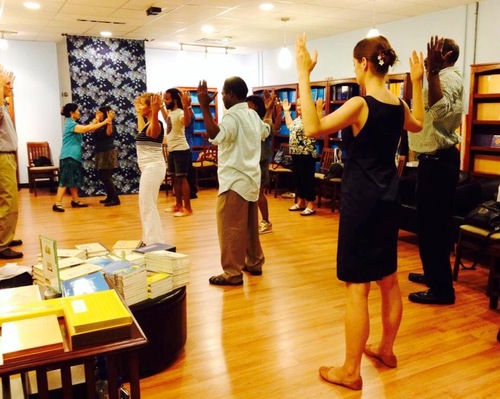 Students learned the exercises during the fifth nine-day seminar. 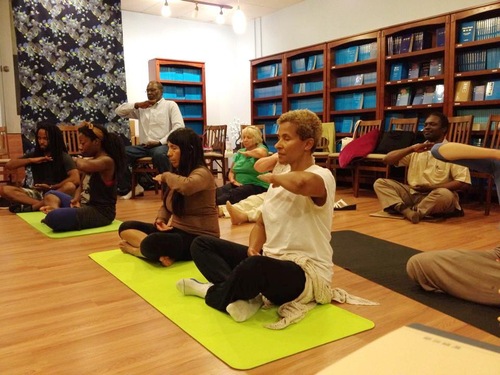 PT, a photographer, had learned Falun Dafa on his own for about one year before coming to the seminar. “One day in a dream, I saw Master Li Hongzhi teaching some students exercises. I came up and asked if I could join. Master said to me, ‘Of course.’”

Thinking of that as a hint to come to this seminar, PT said that he learned a lot from it. In addition to physical improvement through the five smooth, gentle sets of movements, his mind also became more harmonious.

Other students also had similar feelings. Most of them learned about the workshop through the poster at the door of the bookstore. One student said, “Seeing the words of mind-body improvement and ‘returning to the origin,’ I thought about them for a while. This is something I need.”

Other students agreed with him and said the workshop was very beneficial. According to staff working in the bookstore, students from the previous four sessions had similar experiences as well.

One lady who attended the fourth workshop had heavy bleeding and almost died when giving birth to her son several years ago. When her son was three years old, she asked him, “You are three now. Last year you were two; before that you were one. Do you know where you were before that?”

Without thinking, her son replied, “I was in the universe.”

“When watching Master Li Hongzhi's lecture at the workshop, I suddenly recalled my son’s words. Now I have a deeper understanding of life and why we are here.”

“Tianti” means “Ladder to the heavens.” The bookstore is a not-for-profit organization that specializes in selling books, audios, and videos relating to Falun Dafa. It also hosts complimentary nine-day lecture seminars to introduce the practice. The current schedule is once every two months.