Melbourne, Australia: Rally and Parade Mark 15 Years of Peaceful Resistance to the Persecution in China (Photos)

(Minghui.org) On the occasion of the 15th anniversary of the persecution of Falun Gong in China, practitioners held a rally and parade in Melbourne on July 12, 2014.

It was rainy and cold in Melbourne on this winter day. The practitioners remained energetic throughout the three hours that the activities lasted. With courage and perseverance, they peacefully and rationally clarified the facts of the persecution to the public. 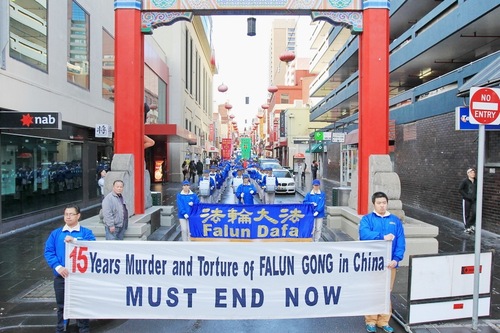 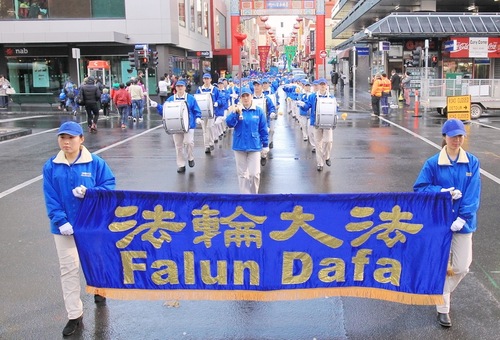 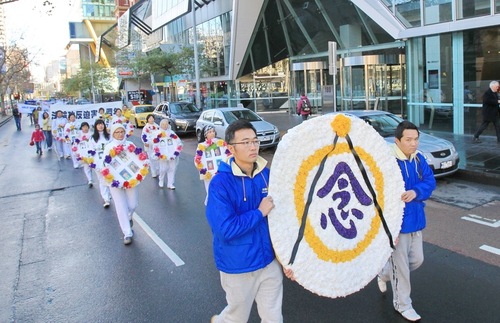 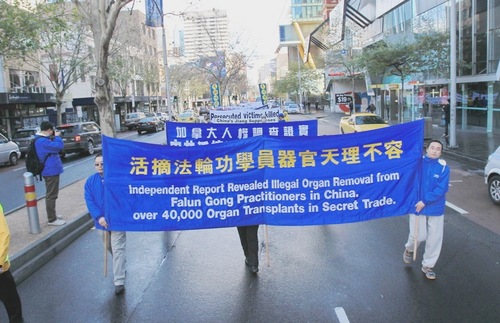 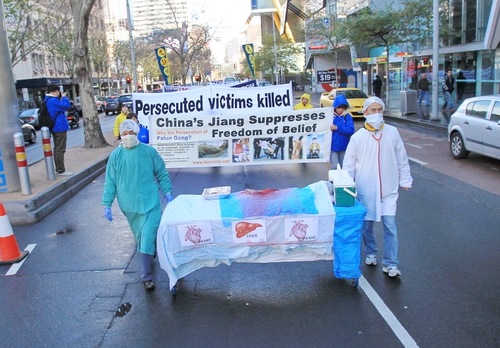 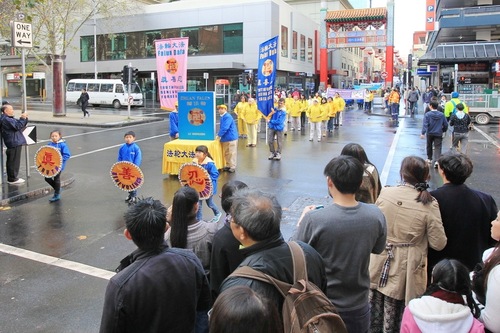 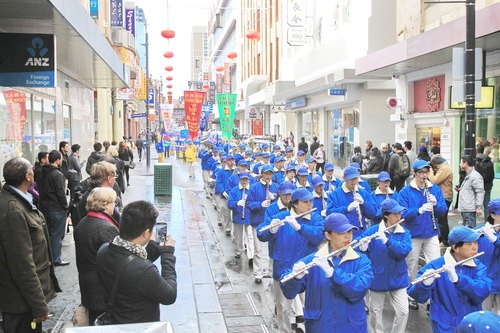 Their procession set off from the library at noon and went through the main streets in the city, including Chinatown. The Falun Dafa Divine Land Marching Band led the way with powerful music. Practitioners dressed in white held wreaths to mourn those practitioners in China who have died after being tortured for remaining steadfast in their belief.

The re-enactment scenes of forced organ harvesting from living Falun Gong practitioners exposed the most intolerable part of the persecution. Many passersby stopped to take pictures of the procession. 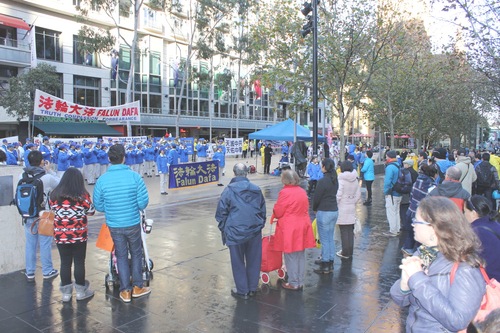 President of the National Civic Council: "I Admire Falun Gong’s Persistent Efforts in Clarifying the Truth" 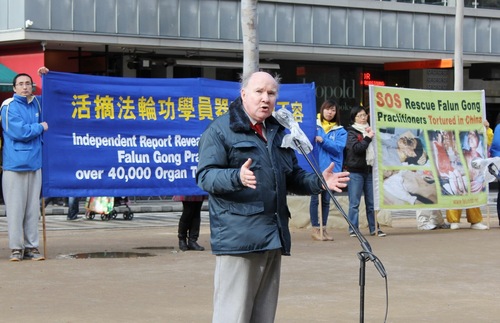 Peter Westmore, President of the National Civic Council, at the rally

Political figures and representatives from civic groups spoke at the rally to express their concerns for the human rights violations currently taking place in China.

This year Mr. Peter Westmore, President of the National Civic Council, again walked the entire march with the practitioners.

Mr. Westmore said that the persecution was an issue not only related to Falun Gong, but also “an issue connected with the future of China.”

“This is an opportunity to stand alongside people who have been persecuted and killed for standing up for their beliefs. Although I'm not a Falun Gong practitioner, I nonetheless have great respect for the principles which underlie their commitment to the cause.

“The principles of Truth, Compassion, Forbearance, ones which, in my opinion, everyone in a civilized country should abide by and to be supporting people who have not only been imprisoned, but in many cases have lost their lives because they believe in those principles, is a familiar duty... It's a duty to stand alongside good people who have been ruthlessly persecuted.”

He also said that the Australian government officials knew exactly what the practitioners suffered in the persecution and that they shouldn’t stay silent. He believed that if people in Australia could voice stronger support for Falun Gong practitioners, the government would one day speak up for justice.

“By highlighting and standing up for truth, you point the way to what is right and just. By practicing forbearance, you provide the strength, which is essential for any campaign to succeed. And your idea of compassion reflects the Christian command to love thy neighbor. You are demonstrating with your example the true essence of the very best of our human nature.”

Australians Support the Practitioners’ Efforts to Stop the Persecution 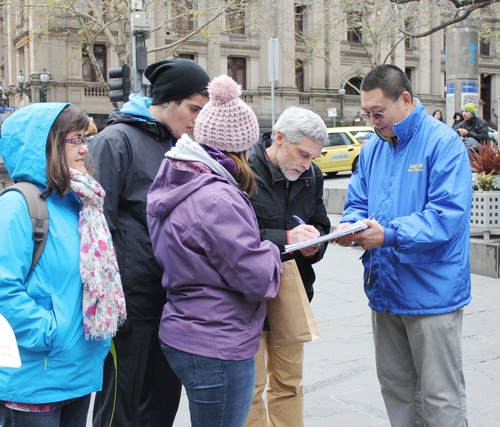 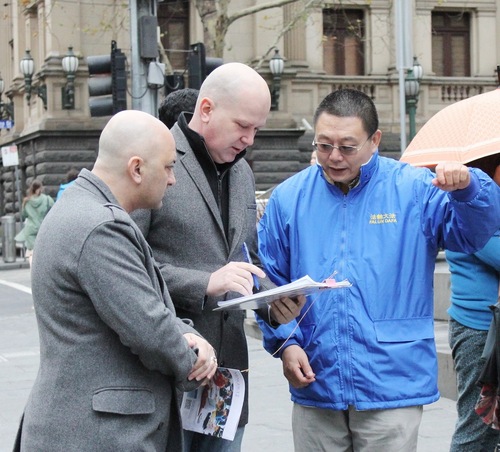 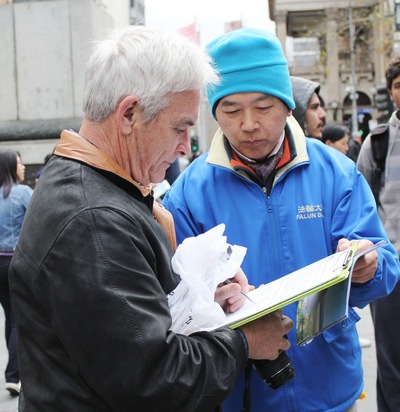 People in Australia sign a petition to support Falun Gong practitioners’ efforts to stop the persecution.

Janett thought the parade was a great idea to let people in Australia learn about the persecution. She hoped that the media would carry more reports on this issue. Lynette Lim was shocked to learn about the forced organ harvesting. She said that one cannot put a price on life and that the Chinese regime should be stopped.

A woman from Adelaide cried after she saw the parade. “How could (the Chinese regime) crack down on such a great belief?” she said. She wanted to know more about Falun Gong and the persecution.

Buervenich from Germany has worked in Melbourne for several years. She signed the petition to condemn the persecution after finding out about the forced organ harvesting from living practitioners.

Alan Moss worked in Telstra and came to observe the rally at lunch break. He knew about the persecution from reading The Epoch Times. He was saddened after seeing the photos of the practitioners in China who have died in the persecution. He said that the march sent a very powerful message.

“Persevering Through 15 Years of Persecution: A Matter of Faith and Choice”