Falun Gong Practitioners Present Letters to Greek and Chinese Officials, Demonstrate the Exercises, and Inform the Public about the Persecution

(Minghui.org) Falun Gong practitioners held an “information day” event in Constitution Square (Syntagma Square) in the center of Athens, Greece, on June 18. The tranquil exercises attracted the attention of locals and tourists alike, and many of whom then learned about the persecution of Falun Gong in China.

President of Greece Antonis Samaras finished his meetings with Chinese premiere Li Keqiang on June 20. Practitioner representatives submitted two open letters to the Greek president at the Intercontinental Hotel in Athens, one for Mr. Samaras and one for Li.

The letters point out that it is wrong to persecute Falun Gong practitioners in China, a country with 5,000 years of splendid civilization. The letter to Mr. Samaras urged him to help end the persecution in China. 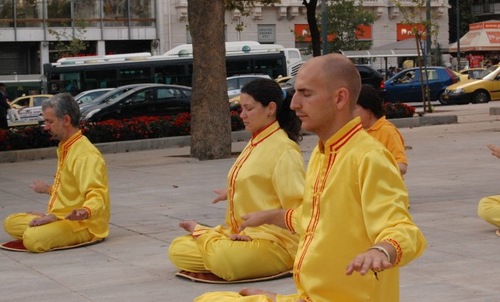 Practitioners demonstrate the meditation (the fifth exercise) on Syntagma Square in Athens, Greece, on June 18, 2014.

“Information day” in Athens on June 18 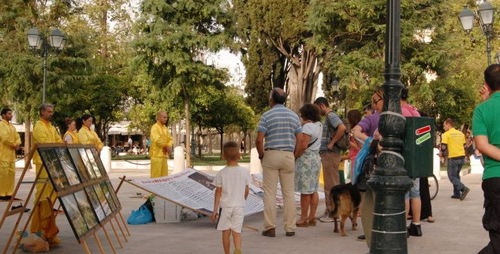 Locals and tourists read the banners