Can New "Membership Development Guidelines” Save the Chinese Communist Party from Its Demise?

(Minghui.org) The General Office of the Party Central Committee recently issued an official document, “Guidelines for Communist Party of China's Membership Development.” The 44-point document focuses on promoting the CCP's “purity,” and lays out plans to increase its membership. One can't help but wonder if this was spurred by the nearly 170 million people who have renounced their membership in the CCP itself or one of its affiliated feeder organizations.

The following day, a state-controlled media outlet Wen Hui Daily published a follow-up commentary that discussed shortcomings in the Party's recruitment initiatives, and efforts to address those dating back to January of last year. It also pointed out that in some areas, no new members have been inducted for several years. As the commentary supported the need for new recruitment guidelines for the CCP, it also shed some light on the CCP's unmistakable decline from a point of view inside China and from within the Party apparatus.

One might ask, will these new guidelines save the CCP from its ultimate demise? The perspective from outside of China certainly does not bode well for the CCP.

The fact that Falun Gong practitioner volunteers can help people quit the CCP organizations is common knowledge among Chinese tourists. Some even plan to do it as part of their itinerary.

Somewhere between 400 to 800 Chinese tourists quit the CCP organizations each week in front of the National Air and Space Museum in Washington DC, one of the many sightseeing attractions outside of China, depending on the weather and season.

Practitioners offer similar help to Chinese tourists at many other sites in Europe, Australia and New Zealand, the Americas, Southeast Asia, Hong Kong and Taiwan. 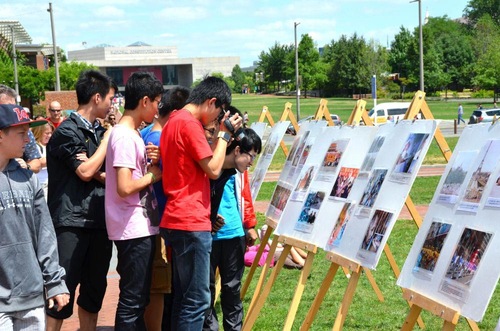 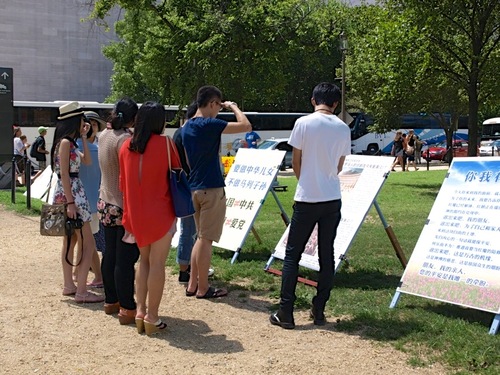 Chinese tourists read the display boards in front of the National Air and Space Museum in Washington DC. 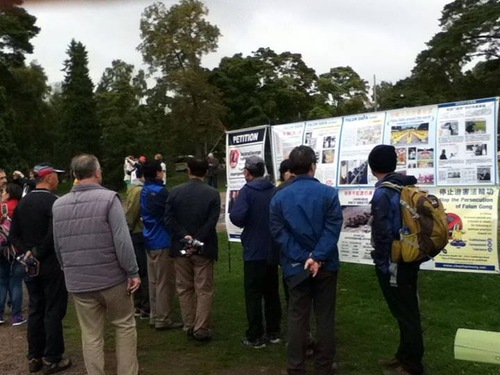 At Sibelius Park in Helsinki, Finland, many Chinese tour guides and tour leaders took the lead to quit the CCP.

Large Numbers Renouncing the CCP from Within China

In China, many CCP officials, those who the Party would have the firmest hold on, have realized just how bad the Party really is and have chosen to quit the CCP organizations to regain a clear conscience. 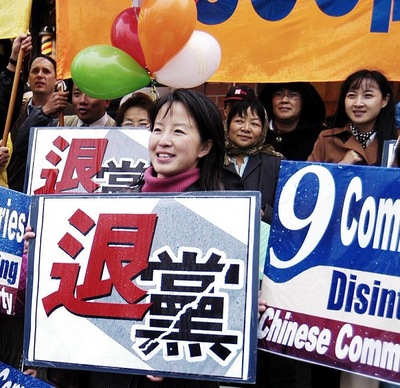 Rally to support the millions of Chinese people who have announced their resignations from the CCP or its organizations. For many, the moment they quit is a huge relief and the restoration of their individual dignity.

As early as May 2005, 25 officials from the Party School of the Central Committee wrote the following letter to the Epoch Times website asking for help to renounce their CCP memberships: “We are long-time revolutionists, cadres, and party members. We are government officials from local to ministry levels. Some of us hold Doctorates and Master's degrees. All of us want to announce our withdrawal from the Chinese Communist Party through the Epoch Times website.

“To protect the safety of our jobs, families, and relatives, we can't use our real names. The following names are all aliases. To our knowledge, nearly 90% of the over 2,000 members of the Party School (of the CPC Central Committee) would want to quit the CCP if they were allowed to do so safely.”

This letter offers a peek into the Chinese people's desire to quit the CCP, inspired by Nine Commentaries on Communist Party published in November 2004 by the Epoch Times. Its website received the first renouncement request on December 3 of the same year.

Most Chinese immigrants, much like those from other countries, settle in their new countries, but still have strong ties to their native lands. Under the CCP propaganda's influence, many Chinese immigrants see the CCP and China as one and the same, and act on behalf of the CCP's interests, thinking that they are helping China.

They are one of the last groups to warm up to the global trend to quit the CCP. Here's an example from Poland.

Ms. Zhang, a Falun Gong practitioner who works at a Chinese-owned company in Poland, heard some Chinese colleagues discussing an interesting topic: They realized the 14 cults officially recognized by the Chinese government didn't include Falun Gong, but practitioners are persecuted under that premise all the time.

Ms. Zhang told them that Chinese regime had published the official cult list twice, in 2000 and again in 2005. Neither had Falun Gong in it. The list that named Falun Gong as a cult was put out by a non-governmental organization, the “China Anti-Cult Association,” a mouthpiece of then-President Jiang Zemin's political faction.

Ms. Zhang was able to talk more in depth with her colleagues about why Falun Gong was being unjustly persecuted and point out the CCP's hypocrisy and corruption. Eventually, each of her colleagues quit the CCP and its affiliated organizations.

A Benevolent Solution and Inner Peace

Journalist and researcher Ethan Gutmann shared his insights regarding the benefit of quitting the CCP at a forum in Washington DC a few years ago. After living in China for many years, he was puzzled by the special respect Chinese people had for Westerners. He asked why, because some of the Chinese he knew were just as wealthy and successful as American businessmen.

The answer he got was, "Freedom of mind." The mind control and fear instilled by the CCP was an invisible shackle, a heavy and all too real burden that made them feel inferior. The option to quit the CCP is a godsend for many Chinese who feel this way, and is far more valuable to them than any financial incentives or other forms of personal gain that the CCP offers as part of membership. 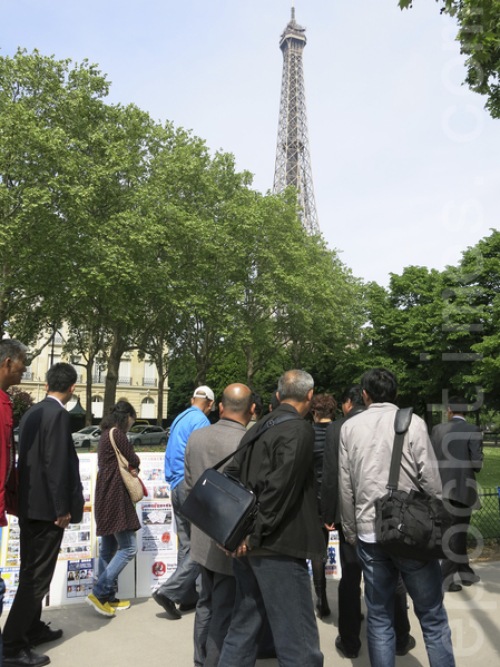 Chinese tourists walk by a Quit the CCP Service Center near the Eiffel Tower in Paris.

On a rainy day in Paris, a Chinese man accepted a flyer from a Falun Gong practitioner near the Eiffel Tower and said, “I know a lot about Falun Gong and the persecution already. I see many of those bad guys [who are actively participating in the persecution] received karmic retribution.”

The practitioner replied, “I can see that you believe in the principle that 'good is rewarded with good and evil meets with evil.' Why not quit the CCP and choose a safe and successful future for yourself?” He soon agreed, and thanked the practitioner profusely.

“Relentlessly Persecuted, Innocent Woman Is Snatched at a Railroad Station on Way to Nephew's Wedding”