(Minghui.org) Liu Yunshan encountered Falun Gong protestors almost everywhere he visited while in Portugal last week. Liu, one of the key perpetrators in the persecution of Falun Gong in China, is a former director of the Propaganda Department and currently a standing member of the Chinese Communist Party (CCP) Central Politburo. 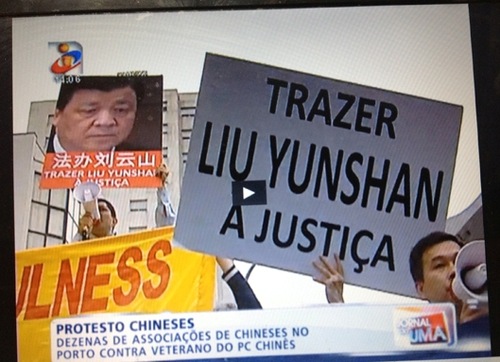 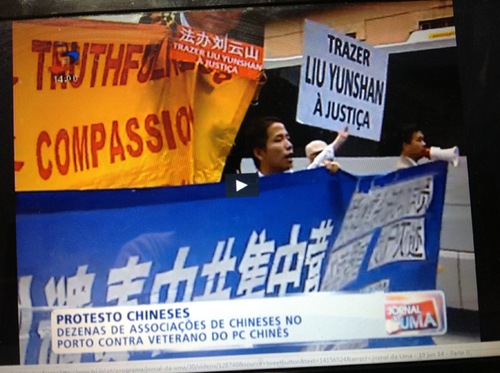 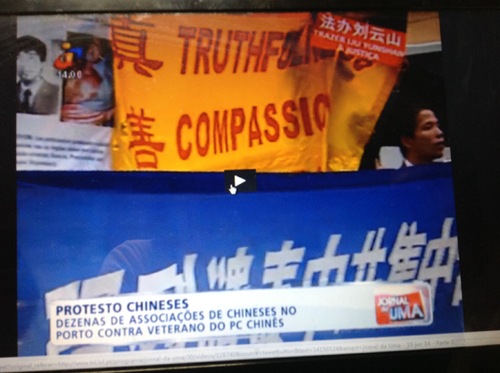 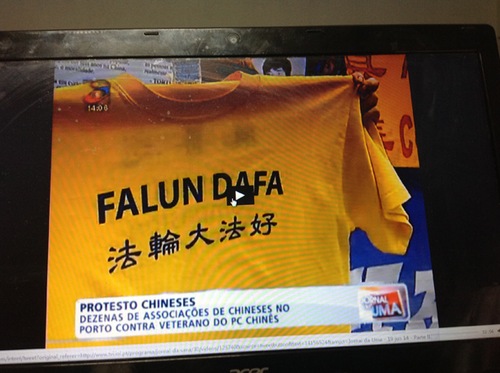 Liu Yunshan, an active participant in the persecution of Falun Gong, regularly encountered Falun Gong protestors when he visited Portugal last week. The protests received a lot of media attention.

Before Portugal, Liu encountered protestors demanding an immediate end to the persecution in China when he visited Finland and Ireland. As a result, Liu’s agenda was kept secret.

Liu’s Official Welcome Crowd Ends Up Stomping on His Picture

On the morning on June 18, Liu was scheduled to visit the National Palace of Belém - the official residence of the Portuguese President. The Falun Gong practitioners waiting there held banners and posters with his headshot and words saying “Bring Liu Yunshan to Justice.”

As Liu’s car approached, the official welcome crowd mobilized by the Chinese authorities snatched the banners and posters from the practitioners and tore them.

They also pushed and kicked the practitioners. One of them became violent and started to stomp on the practitioners’ possessions, including posters of Liu. The officials who came with Liu were stunned and didn’t react in time to stop him. It was all caught on tape by RTP (Radio and Television of Portugal).

Someone in one of Liu’s cars rolled down the window as the car drove by the Falun Gong protestors. He spit at the practitioners and cursed them. The Portuguese police and media reporters witnessed and recorded it.

Before Liu’s motorcade arrived at the hotel adjacent to the Monument to the Discoveries where he was scheduled to have dinner, the Portuguese police had already cleared the way and were standing by. As Liu’s motorcade approached, the first car slammed on its brakes, turned around, and drove away after spotting practitioners with banners and posters. The rest of the cars followed.

Baffled, the Portuguese police standing by asked the practitioners why the motorcade left without seeing anything. The practitioners helped the police learn the truth about Falun Gong and the persecution. One of the officers said, “Keep it up. I support you.” Another police officer had his thumbs up to show his support.

Another Encounter in Porto

Liu left Lisbon and went to Porto on June 19. As they headed to the Sheraton Hotel, they met with a crowd organized by consular officials to welcome Liu. One of them said, “Falun Gong is here also. Let's block their banners.” But the flags they carried were too small to obscure the Falun Gong banners from Liu’s view.

The practitioners peacefully stood in front of the hotel for an hour and, through a megaphone, called out Liu's crimes against Falun Gong. Many media reporters interviewed the practitioners.

Caught at the Back Entrance

Liu’s last stop in Portugal was the location of Chinese Culture Week. Practitioners gathered at the entrances. When Liu arrived, officials in his motorcade attempted to snatch the practitioners’ banners and posters. The police stopped them and gave them a warning. Liu’s people then brought a bus and parked it between the practitioners and the main entrance to the cultural center so that Liu would not see the protest.

As Liu’s cars left the activity center through the front gate, Liu quietly walked out the back entrance. Several Falun Gong practitioners had been waiting for him. Liu hurried away with his head down.

Many Scheduled Events Canceled at the Last Minute

Everywhere Liu visited in Portugal, including Cape Roca, the westernmost point of continental Europe, there were Falun Gong practitioners peacefully protesting and waiting for him. Many of his scheduled visits were canceled.

The Portuguese police who were sent to the scheduled places often wondered why Liu didn’t show. When the police asked, the practitioners explained the facts about the persecution to them.

One of them asked, “Are they afraid of Falun Gong practitioners?” A practitioner told him, “Yes, the evildoers are often cowardly. They are terrified when they see Falun Gong’s banners and hear our voices.”

During Liu’s stay in Portugal, the practitioners twice asked the Portuguese police to deliver a letter from the World Organization to Investigate the Persecution of Falun Gong (WOIPFG) to Liu, but those in his motorcade refused to take it, saying that they wouldn’t take any letter from Falun Gong.

“Vienna, Austria: Tourists from Around the World Support Practitioners' Effort to Stop the Persecution (Photos)”

“People Who Know Me All Say that Falun Dafa Is Good”