(Minghui.org) Flanked by a row of glowering police officers on each side, the gate of the Hubei Province Legal Education Center strikes fear into each person who enters. After being taken through this entrance, each prisoner is subjected to a body search. Two “collaborators” are assigned to stay in the same room and monitor the prisoner at all times.

This “legal education” center is actually a brainwashing facility, and the prisoners are Falun Gong practitioners who are detained and forcibly “transformed,” i.e. beaten and tortured until they renounce their belief.

Human Rights Watch identified such secret, unlawful detention facilities as “black jails” in its 2009 report “An Alleyway in Hell.” Qinglongshan Brainwashing Center, a similar facility in Heilongjiang Province, became notorious internationally earlier this year when four prominent Chinese lawyers were detained and tortured in retaliation for seeking the release of Falun Gong practitioners detained there.

Practitioners who put up resistance to the brainwashing are subjected to further torture or injected with psychiatric drugs. If a practitioner is successfully “transformed,” he or she is forced to become a collaborator, manipulated by the authorities to “transform” other practitioners.

Numerous Falun Gong practitioners detained in this black jail had become physically or mentally disabled, or have even lost their lives. The atrocities committed in this facility by the Chinese regime continue to this day.

“Transforming” Practitioners through Violence and Manipulation

The “transformation” procedure often starts with a police officer taking the practitioner to a room and ordering him to write the “three statements” renouncing Falun Gong. The guards and collaborators receive bonuses for each practitioner they successfully “transform.”

Collaborators sometimes do the job police officers cannot: having been brainwashed by the authorities, they pretend to “help” other practitioners and try to convince them to renounce their belief by twisting and vilifying Falun Gong's teachings. They also try to entice practitioners with other benefits, such as being released and returning to work. 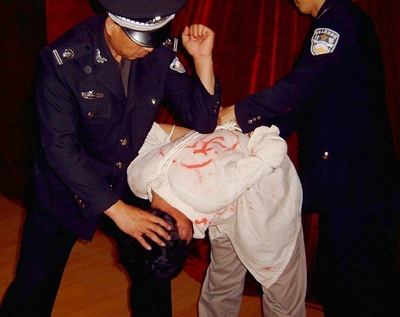 If a practitioner still resists, collaborators are ordered to step up their indoctrination efforts, such as refusing the practitioner food, water, and sleep unless he acknowledges that his meals are given by the Chinese Communist Party. 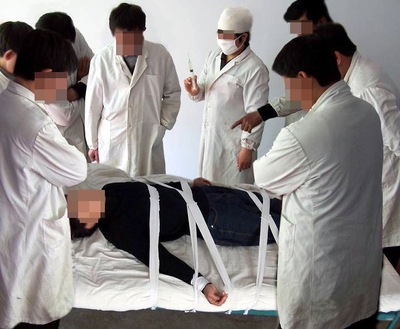 Reenactment of a practitioner being injected with unknown drugs

The guards sometimes resort to drugging practitioners' food to induce an abnormal mental state, making it easier to compel a practitioner to write the renunciation statements and sing songs praising the Communist Party.

In one incident, a practitioner switched his soup with collaborator Liu Chunjiao. Liu poured it out, admitting that the soup contained drugs. On another occasion, Officer Deng Qun gave a glass of water to a practitioner. After drinking it, the practitioner became mentally ill.

One practitioner was injected with an unknown yellow liquid and suffered dizziness, heart palpitations, and numbness all over.

Practitioners who give in and renounce their faith are forced to watch propaganda videos slandering Falun Gong and to write “thought reports” each day. Later, the newly “transformed” practitioners are ordered to write more in-depth reports and record all current and past activities and contacts. These reports have allowed the police to trace and arrest more practitioners.

“Truth Clarification Inside and Outside of China Saves People: Two Stories”