(Minghui.org) Ms. Zhou Dongying is retired from the Dongting Lake Administration Bureau, Yueyang County, Hunan Province. She was severely persecuted because she practices Falun Gong. She was held in a mental hospital and later a brainwashing center, where she was injected and drugged with unknown substances. The drugs nearly took Ms. Zhou's life, and she still has not completely recovered. 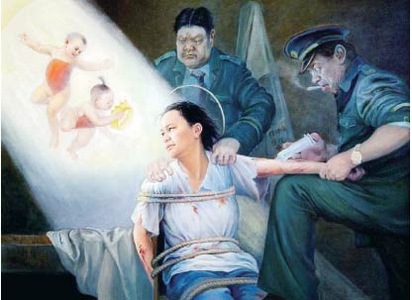 Falun Dafa practitioner Ms. Zhou Dongying was arrested and sent to Hubin Brainwashing Center in August 2005. Zhang Jiehong from the 610 Office beat her when she resisted the persecution. Within a few days, she suffered internal bleeding and was sent to the hospital for treatment.

The next day, Fan Yuehua from her workplace and staff from the brainwashing center took Ms. Zhou to Yueyang Mental Hospital. They told the doctor, “She has a mental problem – she practices Falun Gong.” The doctor tied her down and gave her an unknown drug through an IV all night and also forced her to take drugs orally. When she needed to use the bathroom the next morning, the doctor wouldn't let her and stated, “She has mental problems, I am afraid she will hit someone.” A person sent by the 610 Office to monitor Ms. Zhou told him, “She has no mental problem, I and guarantee it.” Only then did the doctor release the restraint.

Ms. Zhou was injected with unknown drugs and forced to take unknown pills on a daily basis. She was also shocked with electric batons. She developed a tremor and anxiety and felt panicky and sick. A week later, she was transferred back to the brainwashing center. She was still force-fed unidentified pills. Her health declined rapidly, and she was soon in critical condition. Then the brainwashing center staff took her home and left her there. By that time, Ms. Zhou could no longer take care of herself.

Once she got home, Ms. Zhou began pacing up and down the stairs uncontrollably, and she could not eat. Her husband had to take her to the hospital. When the doctor asked her what was wrong with her, she said, “I am a Falun Gong practitioner; I was tied up in a mental hospital, injected with unknown drugs, and force-fed unknown pills for over a week. I cannot control my tremor, I feel panicky and I cannot stop pacing.” The doctor replied, “You need to find who who did this to you. They are responsible. You do not have mental illness. The drugs are causing this. I cannot treat you.”

Ms. Zhou's husband had initially prevented his wife from practicing Falun Gong for fear of persecution. He was heartbroken to see his wife in this condition and with no treatment available to help her. He told her, “You may exercise and study the Fa again,;your Master will protect you.” Ms. Zhou started to study the Fa and exercise again, and she gradually got better. She had one flair up in 2006 when she constantly threw up, felt dizzy, could not walk and was bedridden for two months. Through perseverance in Fa-study and the Falun Gong exercises she gradually recovered.

Held in a Brainwashing Center and Poisoned with Unknown Drugs

Agents from the Yueyang Political and Legal Affairs Committee, the 610 Office, the Dongting Lake Administration Bureau and the Shuishang Police Station (about ten altogether) went to Ms. Zhou's home on September 2, 2012, and took her to a brainwashing center (the “Changsha Legal Education Training Center”).

Each Falun Gong practitioner there was held in a small room of about ten square meters. Each person was monitored 24 hours a day by staff dispatched by the 610 Office. Practitioners were forced to watch DVDs and read books slandering Dafa. They were pressured to write statements to denounce their faith and guarantee not to practice again. Those who refused to be "transformed" were beaten with bamboo sticks, slapped in the face, burned, forced to stand for long periods of time, deprived of sleep, not allowed to eat or drink, and fed poison in their food.

Ms. Zhou held a hunger strike in protest. She was violently force-fed, and a tooth became loose. The perpetrators pinched her all over until she was black and blue.

Her hunger strike lasted 18 days. The brainwashing center staff (including 610 Office staff, and the physician) mixed unknown drugs in her food and force-fed her on a daily basis. When Ms. Zhou stopped her hunger strike and began to eat, they continued to mix the drugs into her food. One day, a male doctor (one of the three perpetrators who murdered Falun Gong practitioner Jiang Meilan) came to check Ms. Zhou's blood pressure. He said that she had hypertension and told the staff to mix medicine into her food. One day, Ms. Zhou found out and asked the staff what had been put into her bowl. They replied, “Medicine for your hypertension.” Ms. Zhou said, “I do not have hypertension!” and she dumped her bowl. Since her meals were always brought in by the staff, she had no idea how long they had drugged her or what kind of drug it was.

One day, Ms. Zhou fell into a deep sleep shortly after dinner and could not be awakened. She said the next day that she would not eat anymore. The staff said, "You can eat the egg. It would be hard to mix drugs in that,” in effect admitting that they had been doing exactly that. The brainwashing center released her that day.

After Ms. Zhou went home, 610 Office head Fan Yuehua and Xia Wei told her husband and daughter that she had “hypertension” and needed treatment. One of the thugs who beat Ms. Zhou in the center told others that her internal organs were “all messed up,” and she would not live long.

Ms. Zhou was delirious when she got home. She was anxious and restless, with an unsteady gait, blurred vision, and could not eat – all symptoms of poisoning. When she got a little better, Ms. Zhou realized that she had been poisoned.

It has been two years since Ms. Zhou was released, but she has not completely recovered.