(Minghui.org) Ms. Wang Jianhui and Ms. Jia Liqing, formerly hospital employees, were sentenced to six and eight-year prison terms, respectively, in 2010 and 2011 because of their beliefs in Falun Dafa. They are incarcerated in the Heilongjiang Women's Prison.

Below are some examples of the persecution they have recently suffered.

Ms. Wang Firm in Her Belief Despite Torture

Ms. Wang believed that she should not be imprisoned for simply trying to follow the principles of Truthfulness-Compassion-Forbearance and being a good person. Therefore, she insisted on doing the exercises in the jail and living with dignity.

She refused to participate in an insulting “squatting roll call” in the 11th jail division after 7:00 p.m. on March 5, 2013. In front of deputy captain Ge Xuehong, who came to do the roll call, six or seven prisoners jumped up to beat and kick Ms. Wang. Guan Xiaoxin and Jin Junli beat her the worst. They kicked Ms. Wangin in the chest and stomach. The same thing happened for the next several days. 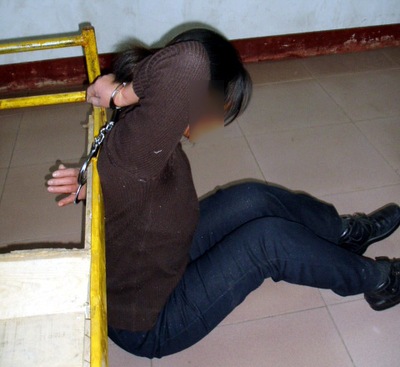 Torture reenactment: “The great back handcuffing”

Ge witnessed the entire beating. Instead of stopping the outrage, she ordered the guards to handcuff Ms. Wang's hands to the legs of a bunk bed and tie her legs with rope. She then arranged for prisoners to monitor Ms. Wang around the clock, and deprive her of sleep. The monitor poked her with a broom whenever she closed her eyes.

Ms. Wang asked to use the restroom at night, but the monitoring prisoners refused to open the handcuffs or untie the ropes. They took Ms. Wang's washbasin that she normally used to wash her face, put it below her, and she had to urinate and defecate into the washbasin. Because it smelled bad, nearby prisoners became angry with her.

Guards came for inspection twice each night. When Ms. Wang told them that the handcuffs were too tight, and asked for them to be loosened, the guards just ignored her.

One day, Ms. Wang asked to see captain Chen Xianying to ask for the torture to be stopped. Chen passed the message back, stating that she would not see Ms. Wang, and also said, “If she doesn't do the squatting roll calls, she will be handcuffed to a bed around the clock and not allowed to use the restroom.”

Ms. Wang later asked to see the director. A prisoner gave the request to Chen and Chen passed back the message, “There is no use in that, because handcuffing you was the jail director's, She Genghui's, idea.” The torture lasted many days.

Chen jumped up and slapped Ms. Wang in the face and again separated her hands. Ms. Wang then put her hands together again.

Chen jumped up and slapped Ms. Wang repeatedly. Ms. Wang held Chen's hands and yelled “Falun Dafa is good!” Other prisoners, including Chen Yangyang, came over and beat Ms. Wang to the ground. They put her hands behind her back, wrapped tape all around her, and taped her mouth shut.

Ms. Wang asked to see the captain, but Chen Kunjie would not allow it. Chen Kunjie went to the office and said that Ms. Wang did the Falun Gong exercises, yelled “Falun Dafa is good,” and resisted when she tried to stop her. The guards listened to Chen's lies and ignored the fact that Ms. Wang had been badly beaten.

Ms. Wang later reported to the captain, Ge Xuehong, that she had been beaten. Ge said, “Who can prove that you were beaten? There was no camera. And, even if Chen beat you, she is about to go home and doesn't care about the scores any longer. So we can't do anything about her.”

Ms. Jia was a special target for persecution in the 11th division from late November 2012 to March 2013. During this time, she was forced to sit on a hard stool with her back straight, hands on her knees facing up, and feet together. If she moved or changed position, the prisoners beat her.

Many times during December 2012, and January and March 2013, her hands were handcuffed behind her back while sitting like this, and she was deprived of sleep. Any time she closed her eyes, the prisoners, including Wang Shanshan, swept her eyes with a broom or threw corn kernels at her (the prisoners were picking corn at the time).

Ms. Jia's hip once hurt severely from sitting on the stool for a long time, so she stood up. Prisoners Cui Xiang, Tang Yongxia, Zhang Yalin, and Wang Shanshan beat her brutally. Even though Ms. Jia was very weak and skinny at the time, they kicked her entire body. Wang kicked her head very hard, and Zhang was screaming, “Why do you still want to live? Die!” Ms. Jia was frequently subjected to this type of beating. 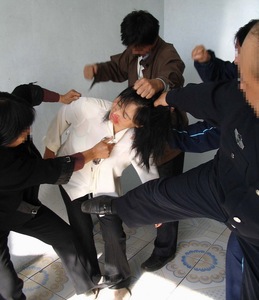 Cui and Tang often found Ms. Jia to “have a talk” with her and try to force her to “transform.” If Ms. Jia answered them a little slowly or not to their satisfaction, they slapped or kicked her. When Ms. Jia was beaten, she often yelled “Falun Dafa is good,” and the prisoners then taped her mouth.

A prisoner punched Ms. Jia in the chest very hard in late November 2013, for something she said. She passed out. That same day, she was transferred to another location and it was said that she was beaten there by prisoners Gao Yanping, Chen Yangyang, and Sun Lei, among others. She has suffered many injuries from the beatings. Ms. Jia is currently being persecuted in the ninth division.

When her family visited her, Ms. Jia told them that she had been beaten. Prisoner Tang Yongxia then said to the family, “I beat her, because she yells.”

Among the prisoners who beat practitioners, Chen Kunjie, Chen Yangyang, and Jin Junli were released between August 22, 2013 and the end of the year. Guan Xiaoxia is still incarcerated. Also, captains Chen Xianying and Ge Xuehong are still there. They should investigated and held accountable for their crimes.

Ms. Wang worked at the Daqing Oilfield General Hospital. She was arrested by Tieren Police Department officers in Daqing on February 28, 2010, while she was working in the hospital, and sentenced to six years in prison. On August 25, 2010, she was sent to Heilongjiang Women's Prison, which is located in Harbin City.

Ms. Jia, 57, has worked as a nurse in the Second Affiliated Hospital of Harbin Medical University for nearly 40 years. On November 5, 2011, while at work, she was arrested by Songbei Police Department officers in Harbin and sentenced to eight years in prison. In late November 2012, she was sent to the Heilongjiang Women's Prison.

““Why Do We Come to New York for World Falun Dafa Day?””