(Minghui.org) The Cangzhou City Court illegally tries Falun Gong practitioners and sends them to prison, despite their being innocent of any illegal activity. Below are several cases of abuse within the city judicial system. 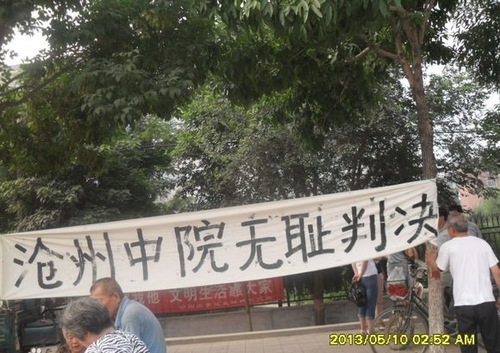 A banner protesting the illegal trials of innocent people 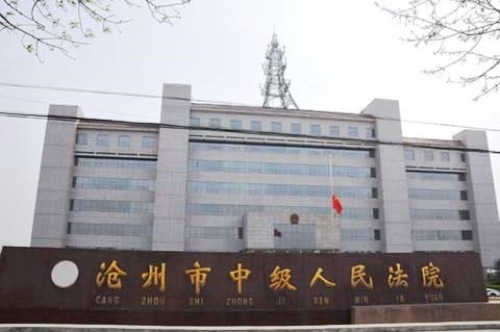 On June 4, 2008 in Cangzhou City, Hebei Province, Falun Gong practitioner Mr. Wang Jiasheng was illegally arrested when he clarified the truth while shopping. Local police ransacked his home and arrested his wife, Ms. Tang Jianying, from their home.

The couple were detained at the Cangzhou Detention Center for more than one year. Ms. Tang Jianying went on a hunger strike three times to protest the illegal detention. When her life was in danger, she was force-fed.

The Yunhe District Procuratorate indicted the couple, using the truth-clarification materials taken from the couple's home as “evidence” of criminal activity. The court held the trial without informing the family members. Mr. Wang Jiasheng was sentenced to 10 years and Ms. Tang Jianying was sentenced to 3 years.

Mr. Wang Jiasheng's 70-year-old mother tried to visit Mr. Wang many times but she was not allowed to see him. She was finally allowed to see Mr. Wang after he was sentenced. Mr. Wang told her that he wanted to appeal the sentence.

Mr. Wang's mother wanted to submit his appeal but the court and detention center kept on handing it back to each other. Mr. Wang's elderly mother kept having to travel back and forth between the two departments in the heat of summer.

Mr. Wang Jiasheng was finally sent to Shijiazhuang Prison. When he refused to do the forced labor he was brutally beaten. He went on hunger strikes to protest the persecution. He is still in prison serving the term.

Mr. Wang Jijun is in his 40s. On September 7, 2009, officers from the Domestic Security Division in Tangshan City and the Yuhe Police Department arrested him. He was placed on trial on November 23, 2009 in the Yuhe District Court in Cangzhou City. His family hired a lawyer who pleaded not-guilty on his behalf.

Under the direction of the 610 Office, the court sentenced Mr. Wang to four years in prison for possessing three CDs and five files on his computer.

Mr. Wang appealed to the Cangzhou City Intermediate Court. On February 11, 2010, the court announced that the original sentence would stand.

On March 3, 2010, without notifying his family, Mr. Wang was covertly transferred from the Cangzhou City Detention Center to the Second Division in Jidong Prison, Tangshan City. Mr. Wang went on a hunger strike to protest.

On February 2012, practitioner Mr. Wang Xiaodong from Botou City was arrested from his home, which was ransacked. His 7-year-old child and mother in her seventies were left alone at home. 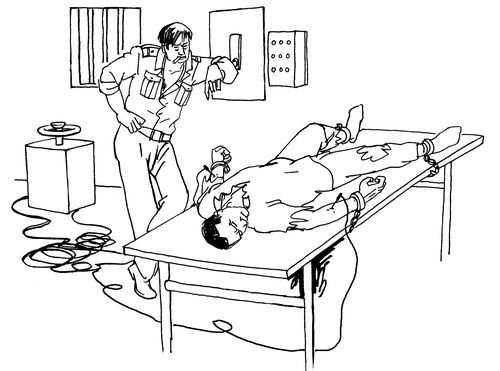 Zhang Zhanhong from the court prevented the lawyer from having access to the case files. Mr. Wang refused to sign on to the unfair trial. Zhang Zhanhong told him he would be sentenced whether he signed or not.

Mr. Wang Xiaodong was sent to Jidong Prison in Tangshan on October 16.

Please read a previous report: Wang Xiaodong, the Man Vouched for by 300 Neighbors, Now in Prison in Tangshan City

On December 24, 2012, Mr. Sun Yuqiang was arrested when he clarified the truth.

On May 7, 2013, the Cang County Court held a secret trial on Mr. Sun and sentenced him to 3 years. In protest, Mr. Sun held a hunger strike.

Mr. Sun hired a lawyer to appeal but the court deprived him of his right to hire a lawyer. On June 17, 2013, Mr. Sun was sent to Jidong Prison in Tangshan city.

Mr. Sun's lawyer protested the procedure and submitted a strong complaint. The court admitted that Mr. Sun's case had not been handled properly. However, the court said that the local 610 Office had to approve the appeal first, despite the lawyer's protest.

Mr. Sun held a long-term hunger strike to protest the persecution. He was force fed and his health rapidly declined. Due to his health problems, Jidong Prison wanted to grant Mr. Sun medical parole, but the local 610 Office delayed it with a variety of excuses. Mr. Sun is still imprisoned.

“Cultivating Dafa Is a Boundless Fortune, a Mountain of Gold Cannot Compare”