(Minghui.org) Today's news from China includes persecution that took place in 7 cities or counties in 5 provinces. According to this report, 1 practitioners was subjected to mistreatment during detention, and at least 7 practitioners were illegally arrested. 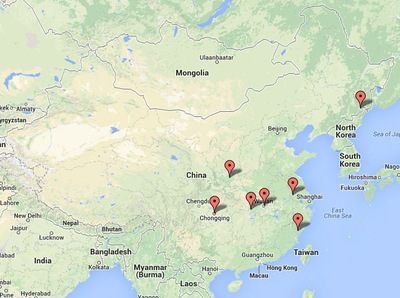 Ms. Pan Hongxia was arrested on the night of April 20, 2014. She is being held at the Wuhan No. 1 Detention Center.

Ms. Dai Fumei was arrested in the middle of April 2014.

Ms. Huang Julan from the Fu'an Grain Bureau, 66, was arrested at home by Fu'an domestic security officers on the morning of March 23, 2014. The officers ransacked her home. She is still being held at the Fu'an Detention Center.

Ms. Cui was recently arrested by police and her home was ransacked.

Ms. Ma Yunhua, 65, asked her former employer for her pension, which they withheld because she refused to renounce Falun Gong. She was arrested by officers from the Lianhu Police Department in Xi'an. Her home was also ransacked. Ms. Ma escaped.