(Minghui.org) May 13 th , World Falun Dafa Day and the birthday of Master Li Hongzhi, the founder of Falun Dafa, is just around the corner. On April 26, 6,000 Taiwanese Falun Gong practitioners held activities at Freedom Square in Taipei to celebrate the holiday and send their birthday greetings to Master Li. 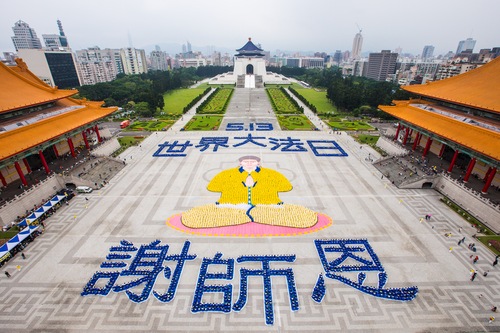 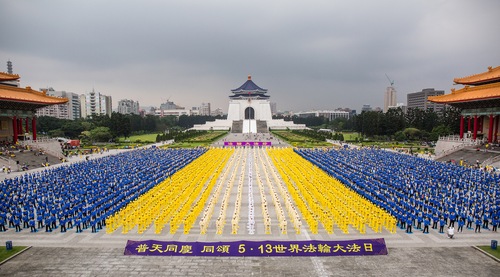 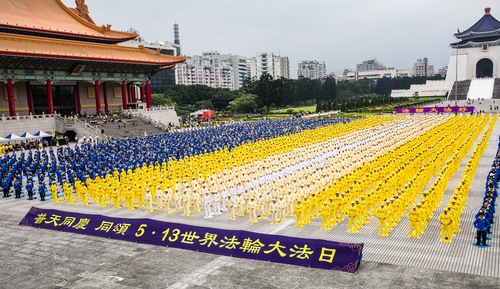 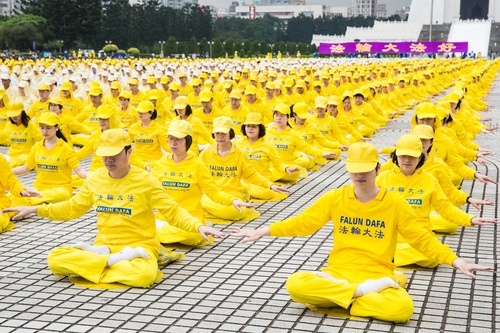 Practitioners formed the Chinese characters for “5.13 World Falun Dafa Day” and “Thank You, Master.” Between the characters is an image of a practitioner sitting in the full lotus position.

Huang Chunmei, one of the organizers, said, “We want to express our appreciation to Master Li this way. We also want to show the beauty of Falun Gong to the public.”

Falun Gong was first introduced to the public in 1992, and has since spread to more than 100 countries. In Taiwan, 800,000 people from all walks of life practice it at more than a thousand exercises in 300 towns. Practitioners who have benefited from it both physically and mentally want to express their appreciation and help more people know about Falun Gong.

The image and words attracted the attention of many tourists. Mr. Chou, a tour guide, felt pure, strong energy. He took a lot of pictures. Mr. Chou said, “Falun Gong practitioners are nice and have good manners. They are different from many other groups.”

“I have never seen such a large scale character-forming. It is amazing,” he said.

A couple from China were glad to see Falun Gong in Taiwan. The husband said, “The Communist Party always deceives people. I knew all their propaganda attacking Falun Gong were lies.”

“This is an eye-opening event,” he said. “I am very glad to see Falun Gong again today. The last time that I saw such a large scale Falun Gong event was in Liaoning Province 17 years ago.” 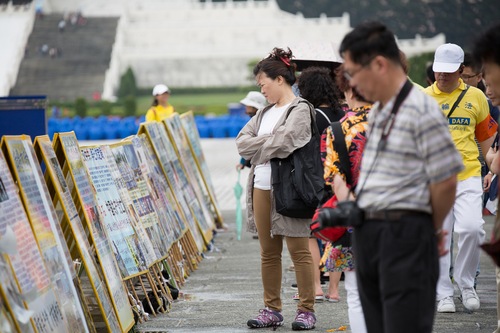 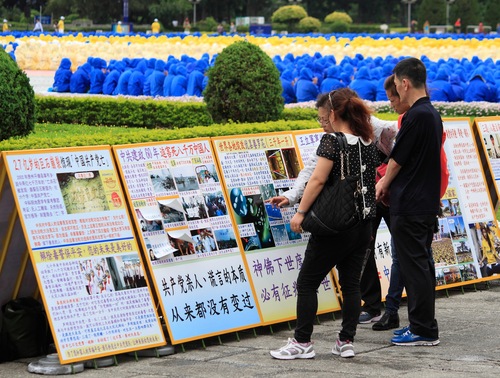 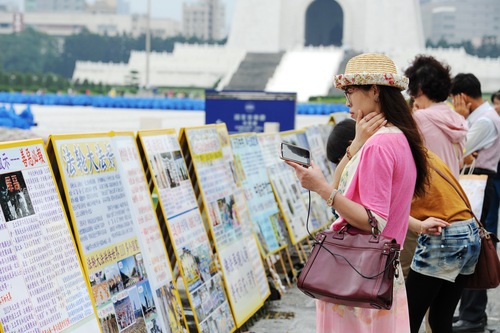 Practitioners set up display boards to let people know about the teachings of Falun Gong and how it has been embraced throughout the world.

Robin Whitwell, a computer engineer from England, read the information for a long time and then talked to practitioners. He commented, “The communist party tries to control everything, including education, the Internet, media, etc. Chinese people have no freedom to learn the truth.”

Robin said that Chinese people should fight for freedom. He felt terrible that the Party persecutes Falun Gong. “Freedom of belief should not be suppressed,” he said.

Mr. Wan, a retired businessman, supports Falun Gong. “One of my friends has practiced Falun Gong for more than 10 years. He is a really good person and has benefited from Falun Gong a lot. The persecution is really ridiculous. It should end now,” he said.

“There are no human rights in China,” Mr. Wan said. “Ten years ago, one of my business partners asked me to invest in China and promised me big profits. I rejected the offer, because I know the Party's policies are not reliable. They don't have any credibility. I also tried to talk my partner out of it. He didn't listen to me and ended up losing 100 million yuan.”

Mr. Wan said that the Party has ruined the moral standard in China. “My friends, who do business in China, told me that China is full of counterfeit products. The pollution is very severe. You can't even find clean drinking water. I have no desire to travel there.”

Mr. Lin, who was with Mr. Wan, agreed with him: “There is no protection for Taiwanese in China. There is no law in China. We don't have any hope there. I don't want to do business there until the situation in China changes.”

Mr. Fan said, “I try to follow the principles of Truthfulness-Compassion-Forbearance in daily life and always consider others first when I do business. My customers trust me, and my business just gets better and better. I want to tell people about such a good practice.”

Mr. Bai witnessed the spread of Falun Gong in Taiwan over the last ten years. “I am glad that Taiwanese are not influenced by the communist party's lies, and more and more have joined the practice. However, many Chinese people still don't know what Falun Gong really is. That is why I often come here to tell people about Falun Gong.”

“I won't stop until the persecution of Falun Gong ends in China,” said Mr. Bai.

At 3 p.m. the Divine Land Marching Band and the NTDTV Flag and Drum team, both made up of Taiwanese Falun Gong practitioners, performed for the tourists, marking the end of the event.