Since 2000, Falun Gong practitioner Ms. Zhang Youfu has been arrested 13 times and twice sent to a forced labor camp, where she was beaten, force-fed, and deprived of sleep.

Ms. Zhang Youfu was fired from her teaching job because she refused to give up practicing Falun Gong. To make a living, she went to Xinjiang to find a job.

Officers from the Banfanggou Police Station in Wulumuqi County arrested her and another practitioner, Tang Jing, as they returned home from work on August 29, 2013. The truth-clarifying DVDs, the software to break through the Internet blockade, and their Dafa books were all confiscated. Ms. Zhang was detained for 15 days. Tang Jin has since been detained.

On the afternoon on December 11, 2013, Ningqu Police Station officers arrested Ms. Zhang as she was about to start teaching her class at the Affiliated Elementary School of the Wulumuqi 110 High School in Xicun, Anningqu Town, Xinshi District, Wulumuqi City.

The police detained her for 15 days with the excuse that she talked about Falun Gong to her students. The police officers involved in her case were Ma Long and Zhang Long.

Taken to a Forced Labor Camp and Severely Tortured in 2000

Ms. Zhang went to Tiananmen Square to appeal for Falun Gong in June 2000. Police arrested her, but with strong righteous thoughts she soon left the jail. As she waited at the Gantang Railway Station to return home, police again arrested her and took her to the Zhongwei Detention Center, then to the Jingtai Detention Center for over a month.

In July 2000, Ms. Zhang was sentenced to forced labor for one year and was taken to Gansu Province No. 1 Women's Forced Labor Camp in Ping’antai, Lanzhou City.

Ms. Zhang was severely beaten at the labor camp. For an extended time, she was deprived of sleep and was force-fed. She was once hung between two bunk beds with her arms stretched apart for five days and nights, for as long as 120 hours. She was not allowed to use the bathroom. Her arms and palms remained swollen for months after she was taken down. She still feels the aftereffects of this torture today.

Ms. Zhang started a hunger strike to protest the persecution in October 2000. The police dragged her to the labor camp's medical center to be force-fed. They tied her to a bed and brutally force-fed her. Many times she almost died during the punitive forced-feeding sessions. 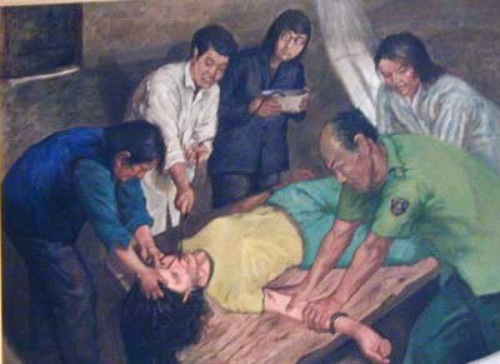 To force Ms. Zhang to give up her belief, the camp guards rotated prisoners often to monitor and torture her. They did everything they could think of to torture her. Inmate Chen Yanju often found excuses to beat Ms. Zhang. Once, Chen beat her until she fell down, then kicked her in the ribs. The pain made her unable to breathe. A drug offender punched Ms. Zhang in the eye, and she temporarily lost her sight. Within just a few months, Ms. Zhang was reduced to skin and bones. 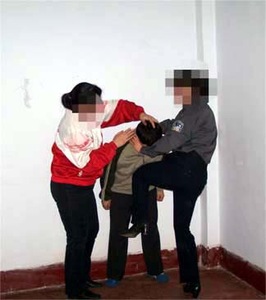 Realizing that Ms. Zhang refused to give up her belief in Truthfulness-Compassion-Forbearance, the guards made her stand for long periods and deprived her of sleep for several days and nights. They forced her to do intensive labor knitting, without breaks. She was forced to work until 3 a.m. every day.

Ms. Zhang started to do the Falun Gong exercises openly. The head of the guards handcuffed her and forced her to stand for long periods. He also incited a prisoner named Chen Xiaohong to beat her many times. Once, Chen dragged Ms. Zhang to the back wall of her cell, then hit the sensitive parts of her body, including her head, eyes, and face.

The guards were unsuccessful in coercing Ms. Zhang to renounce her belief, so they extended her term by another four months. Tortured both mentally and physically for so long, she became extremely feeble. For a time, she lost her memory.

Sentenced to Forced Labor in 2002

Ms. Zhang went one more time to Tiananmen Square at the end of 2001 and called out, “Falun Dafa is good! The Fa rectifies the universe, the evil is completely eliminated!” She was arrested. In the local detention center, Ms. Zhang went on a hunger strike to protest the persecution and was force-fed. On the 18 th day of her imprisonment, the police believed that she was dying. Along with several other practitioners who were also dying, they left her near a railway station. She struggled to get home.

Ms. Zhang was reported to the police on July 20, 2002, for talking to people about Falun Gong and the persecution. Fan Fengtao and Wang Xiulan from the Domestic Police Division of the Baiyin City Police Department arrested her. Her home was searched and she was sentenced to two years of forced labor.

At Gansu Women's First Forced Labor Camp, Ms. Zhang refused to be “transformed.” Wang Yuying, guard team leader, and drug offenders Li Yingxia and Li Xiuying handcuffed her to an iron door 3 meters high. She was hung there for a long time. She could hardly move her arms when she was taken down.

Around May 5, 2005, Ms. Zhang was arrested again as she was reading Dafa books on her way to Zhongwei, Ningxia. She was taken to the Jingtai County Police Department. Domestic police division team leader Zhang Guohua extorted 2,000 yuan from her family as a deposit to release her on bail before her trial.

Ms. Zhang was severely tortured both physically and mentally in the prison's attempts make her “transform.” The guards forced her to sit on a small stool for extended periods of time, and she was deprived of sleep. They ordered her to recite the prison rules and write the three statements every few days. Every day, she was forced to watch TV programs and videos that slandered Falun Gong. If she refused, she would be subjected to sleep deprivation, would be beaten, or verbally abused.

Personal monitors supervised Ms. Zhang 24/7; they slapped her ears, beat her, and refused to let her use the restroom. Every Saturday, she had to report to the police. If police were not satisfied with her “progress,” they would beat her until she was black and blue.

There were other practitioners imprisoned with Ms. Zhang. One was Ms. Yue Dingxiang, who was forced to swallow a big can of water, then not allowed to use the restroom when she needed to. Ms. Guo Huifang was severely beaten by a personal monitor named Ma Rong because she snored. Because Ms. Wu Lijun refused to write the three statements, she was beaten until her legs were black and blue. Another personal monitor named Ma Yaqin secretly poured toilet water into a kettle and forced Ms. Wu to drink it without telling her what it was. Two of Ms. Zhang Yuxia teeth fell out after a beating.

Ms. Zhang Youfu was close to death when she was released on November 9, 2009. Nevertheless, the Tiaoshan Farm Police often threatened and harassed her after that. Officers from the Baiyin City Police Department also followed and monitored her for a long time.

Ms. Zhang taught music at the Tiaoshan Group Company. Before she started to practice Falun Gong, she suffered from eye pain, a nervous condition, headaches, dizziness, cholecystitis, and many other ailments. She looked everywhere for a cure without success.

All of her health problems disappeared without treatment in 1998, soon after she started to practice Falun Gong. She personally experienced the extraordinary power of Dafa. From then on she followed the principles of Truthfulness-Compassion-Forbearance, and always put others first. She worked hard, and the school recognized her outstanding effort with awards. Many people could see the beauty of Falun Gong from Ms. Zhang's behavior.

When the CCP started to persecute Falun Gong, the school took away her teacher’s license without giving a reason.

Ms. Zhang was first persecuted in April 2000. As she was doing the Falun Gong exercises at Jinyu Park in Baiyin City, the Baiyin Park police arrested her and took her to the Baiyin City Drug Rehabilitation Center and detained her for 15 days. On May 1, Ms. Zhang returned to school but discovered that the principal, Yang Zide, had terminated her contract and taken away her license to teach.

Students and teachers alike were shocked by the news; many of her students were in tears when they heard.

“Melt Into the Fa and Deny the Old Forces' Arrangements”