(Minghui.org) Falun Gong practitioner Mr. Chang Jubin, who used to be in charge of a courtroom in the Baiying City Procuratorate, was showing signs of suffering from a mental disorder upon his release after 11 years in Lanzhou Prison, Gansu Province on August 31, 2013. His wife is filing for divorce, and he is currently homeless.

Mr. Chang was one of the nine practitioners accused of tapping into cable television in the Lanzhou area and broadcasting videos clarifying the facts about Falun Gong in 2002. These practitioners were given prison sentences ranging from 10 to 20 years.

Mr. Chang, 36 at the time, was sentenced to 11 years and admitted to Lanzhou Prison, where he was tortured and allowed no visitors. He was confined in a dark room in Ward IV from 2005 through 2008 for protesting the persecution. He was put in solitary confinement for two months in August 2008, and handcuffed to a bed and tortured in July 2009.

In March 2010, a letter from Mr. Chang to the procuratorate (where he used to work) was turned over to the political director, Zhang Quanmin. After reading it, he put Mr. Chang in solitary confinement, handcuffed and shackled him, and connected the cuffs and shackles with wires to force him into a fetal position. He was held in the solitary cell for 76 days, became emaciated, and was losing his eyesight. The guards finally released him when they thought he was dying. 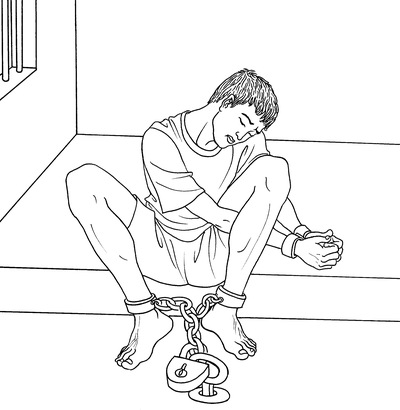 Torture illustration: Handcuffed and shackled to the ground

Falun Gong practitioners were sent to Lanzhou Prison starting in 2001. When they arrived, they were put in the induction team, where they were subjected to brainwashing in an effort to “transform” them. Those who resisted were hung up by their handcuffs in the workshop. Every practitioner was closely watched by inmate-helpers to prevent them from talking or doing the Falun Gong exercises.

There were no windows in the solitary cells. Each such cell had a cement bed, with a 30 cm diameter toilet hole in front of it. Later they moved the solitary cells to the basement and equipped them with torture beds and iron chairs, and made them soundproof so that cries could not be heard from the outside. Each practitioner was given two buns daily and nothing else. The cells are extremely cold in the winter and hot in the summer.

“Police Detain Practitioner's Wife to Use as Leverage Against Him”