(Minghui.org) On March 28, 2014, Falun Gong practitioners protested in front of the Bellevue Palace and Reich Chancellery in Berlin, where Xi Jinping, head of the Chinese Communist Party, made stops during his visit to Germany. They called for an end to the 15-year persecution of Falun Gong in China and for bringing the key perpetrators to justice. They also urged the German government to do its part to help stop the brutal persecution. 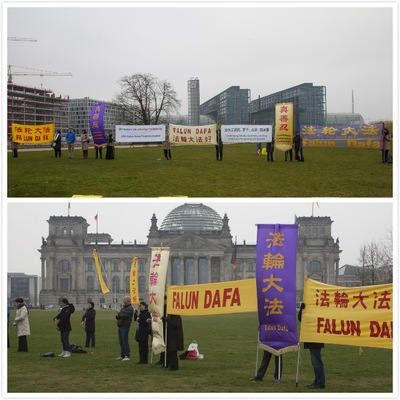 Falun Gong practitioners protest in front of the Reich Chancellery and German Parliament.

The Falun Dafa Association of Germany wrote to Angela Merkel, Chancellor of Germany, urging her to raise the issue of the persecution of Falun Gong during Xi's visit. The Association's letter also cited the European Parliament's resolution, passed in December 2013, which condemned China's state-sanctioned organ harvesting of Falun Gong practitioners.

Ms. Zheng, organizer of the protests, said, “We demand that all key perpetrators be brought to justice. They include Jiang Zemin, Luo Gan, Zhou Yongkang and Liu Jing. We demand that the persecution be ended immediately.”

Franz, a Berliner who has practiced Falun Gong since 2008, said that by joining the protest, he hoped that the Falun Gong practitioners detained and persecuted in China could obtain freedom and justice. He also commented that the German government shouldn't simply focus on economic issues during Xi's visit. Given the painful history of the Holocaust, they should be genuinely concerned with the persecution of Falun Gong in China.