(Minghui.org) “This is not just a stage performance. It is true history,” said Ms. Qi, a Chinese pottery artist in Germany, at the March 23, 2014 opening night of Shen Yun at the Stage Theater at Potsdamer Platz, Berlin. “This performance is so close to our lives and connects our memory of ancient and contemporary as well as heaven and earth, reality and the future... I see hope in it.”

However, such an uplifting performance didn't happen without overcoming amazing difficulties. German media described the behind-the-scenes drama in getting Shen Yun to the stage as a “Cold War at Potsdamer Platz.”

Over a month prior to opening night in Berlin, the Cultural Counsellor at the Chinese Embassy demanded that the theater cancel the four scheduled Shen Yun performances. The theater declined to comply.

The opening night performance in Berlin was sold out several days in advance, with the theater adding more seats to satisfy audience demand. Ordinarily reserved Berliners responded to Shen Yun with overwhelming applause and genuine praise. 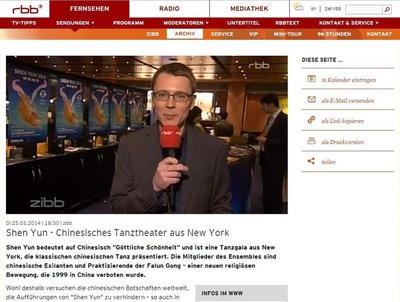 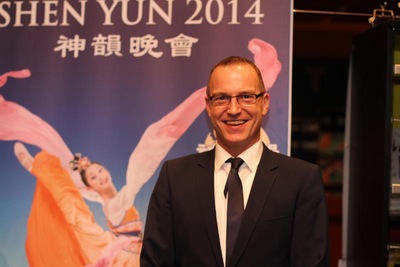 Mr. Jörg Seefeld, director of the event department at the Stage Theater at Potsdamer Platz, highly recommended Shen Yun upon seeing it for himself. Prior to the event, The Berliner Zeitung quoted his response to the interference as: “I'm from the former East Germany. Among the Chinese, it was the same as our [East German] rulers. They are afraid.”

Mr. Boy Wynsch of Art Nordic and a patron of the arts, saw the Shen Yun show in Berlin on March 25.

He commented, “We have seen today a show that touches the heart. There is nothing political in this show. It only tells the world about China today and the culture of China spanning 5,000 years.

“Culture can’t be suppressed … It is not a question if Shen Yun wants to present the performance to the world, but that they have to bring it to the world. They are obligated to do so.

“What we have seen today is an unbelievably strong message calling for freedom... I think Shen Yun stands for hope. Or stated more clearly, it does not stand for hope because everything will come naturally. Shen Yun has to be shown more, and more and more people will understand its message.”

The Chinese regime also attempted to interfere with the Shen Yun performance in Frankfurt, the stop before Berlin. 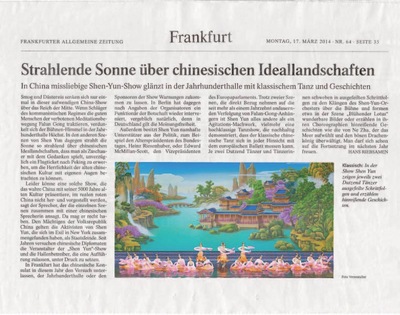 The report asserted that there is freedom of expression in Germany and that any sabotage of such freedom would be futile. It mentioned the support shown to Shen Yun from many politicians, including Mr. Heinz Riesenhuber, Alterspräsident (Father of the House) of the Bundestag, and Mr. Edward McMillan-Scott, Vice President of the European Parliament. 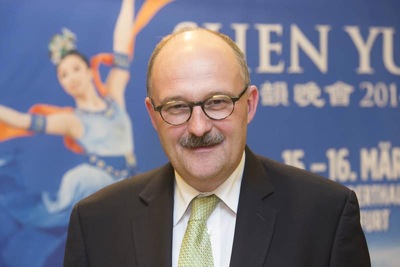 Dr. Michael Meister, Parliamentary Secretary of State to the German Federal Minister of Finance, attended the Shen Yun performance in Frankfurt on March 15. For him, Shen Yun was a completely new cultural experience. He remarked that the “message is very profound. It is fascinating to be able to reflect on the profoundness during and after the show. One can let it sink in later.“ 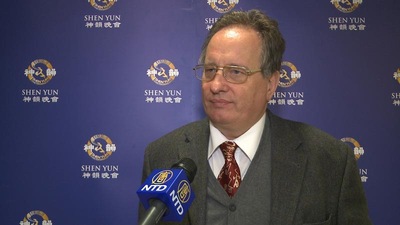 He said, “It is an excellent artistic accomplishment. I experienced the intensity of the applause and am happy about it. Also, the hall is filled to the brim and those who got a ticket are the lucky ones.” 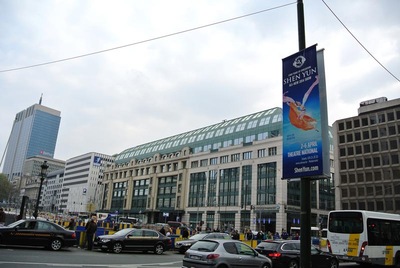 Shen Yun advertisements can be seen around busy streets in Brussels, Belgium.

Shen Yun is scheduled to perform at the National Theater in Brussels from April 2-6, 2014. The six performances coincide with several summits in town. The head of the Chinese Communist Party (CCP) will also be visiting the city during this time. Therefore, CCP officials pressured Belgium to take down Shen Yun advertisements and cancel the performances prior to the arrival of the CCP head.

Mr. Edward McMillan-Scott, Vice President of the European Parliament, wrote to the mayor of Brussels urging him to stand by freedom of expression and informed him of many incidences in which Shen Yun successfully performed despite CCP interference. The mayor responded that he would not order the advertisements to be taken down and that the performances at the National Theater would also go on as scheduled.

Various media reported on the interference on March 28 and exposed the CCP's attempted manipulation of the local arts market. Shen Yun thus became a hot topic throughout the city of Brussels. As happens every time, the CCP's interference has turned out to be free promotion for Shen Yun.