According to medical professionals, these four drugs, Metoprolol, Nitrendipine, Compound Hypotensive Tablets, and Enalapril, are intended for patients with severe symptoms of high blood pressure, and should never be casually taken together.

Each of these medications comes with its own set of side effects. Long-term use of the four-drug cocktail, especially by people with no blood pressure problems, will cause dire consequences to their health. In one physician’s words, “Such use would be like suicide in slow-motion.”

Such “drug poisoning” does not produce overt signs of physical abuse, yet it often causes long-lasting and irreversible damage to the practitioners' health.

Mr. Peng experienced dizziness, headaches, chest pain and swelling in his legs and feet. He was often confused and had memory loss. Fortunately, he gradually recovered after resuming his practice of the Falun Gong exercises upon his release.

Not every practitioner who had similar experiences was so fortunate. According to Mr. Peng, he knew of three practitioners who died as a result of such drug poisoning. He calls on his fellow citizens and the international community to pay close attention to such tactics by the Chinese regime.

Below is Mr. Peng’s personal account of his experience.

I am a 52-year-old Falun Gong practitioner from Majie Town, Luliang County, Qujing City, Yunnan Province. Ever since I began my practice of Falun Gong, I had always been very healthy and energetic.

I was sentenced to four years on December 3, 2010, and sent to Yunnan Province First Prison ten days later.

As soon as I was admitted to the prison, I was taken to the prison hospital for a checkup. The doctors declared that I had high blood pressure, yet they never showed me the test results.

They immediately began to administer IV injections. Two monitors were assigned to keep an eye on me around the clock. It usually took one and a half hours to administer two bottles of an unknown substance. I felt itchy on my face and noticed swelling later, but the monitors kept saying it was normal and I’d be fine. 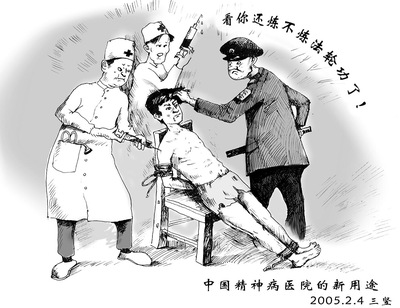 The IV injections lasted about one month. In the meantime, I was forced to take four different kinds of blood pressure medications three times a day every day since Day 1.

The doctors never told me the details of the drugs, but I later learned from others the drugs were Metoprolol, Nitrendipine, Compound Hypotensive Tablets, and Enalapril.

I had no way to spit out the drugs, as the monitors were always there to make sure I swallowed every pill. Every time I took these medications, it felt like my head was about to split open and I experienced dizziness and sharp chest pain. My legs and feet also became swollen.

As if the drug poisoning were not enough, the guards began to make me package clothes in their workshop one month into my incarceration. Due to the drugs I was taking, I often felt dizzy, but still had to keep working. Once I stumbled and fell, and one side of my face had scrapes as a result.

Division Head Yang Chenglai once tried to get me to give up my belief in Falun Gong, but I firmly refused. Team lead Zeng Gang talked to me twice every month, but he also failed to make me succumb to the pressure.

During my entire imprisonment, I was not allowed even once to make phone calls. In addition, I only got to see my family three times during the two and a half years of detention.

The day before my release, the guards still had me take the four drugs. After I was set free on May 4, 2013, I immediately began to read Falun Gong books and do the Falun Gong exercises. Little by little, I recovered from the damage caused by the blood pressure medications.

Upon my release, I began to research the four drugs I was forced to take while in custody, and I also consulted a few medical experts. What I learned gave me chills, and I felt lucky that I was still alive.

Metoprolol may cause damage to the blood circulation system, the digestive system, and the central nervous system. It may also result in arthritis, itching, hearing and vision problems.

Nitrendipine may cause headaches, rash, dizziness, nausea, swelling in feet and chest pain. Sensitive patients may even develop allergic hepatitis.

All the doctors I spoke to cautioned against taking these drugs together. They also advised me to carefully follow the prescribed doses.

They were all shocked when I told them I was forced to take these four drugs together every day for two and a half years. When they recovered from their surprise, they explained to me the mechanism of blood pressure medications.

“Blood pressure medications work by expanding blood vessels to relieve the pressure. If a person with normal blood pressure takes such drugs for long periods of time, they will develop problems with their blood circulation. They will experience dizziness and lack or even loss of strength. Their internal organs will gradually become dysfunctional. They will have irregular heartbeat, insomnia and chest pain. All these symptoms are similar to those caused by high blood pressure. They will eventually lose consciousness and go into a coma.”

One physician summed it up, “Such use would be like suicide in slow-motion.”

I was fortunate to have survived, but I knew of a few fellow practitioners who died as a result of similar drug poisoning, including Fang Zhengping from Sichuan Province, Shen Yueping and Yang Cuifen from Yunnan Province.

My wife and I were enjoying a street fair on March 26, 2010 when an officer from Majie Police Station stopped us and asked me to follow him to the station for a talk.

To my shock, I was restrained the moment I got there and was soon driven to my home, where a group of officers were already waiting outside.

My wife returned home in a little while and opened the door. The police rushed in and turned our home upside down. They took away Master’s portrait, my Falun Gong books and music disks. They never produced any search warrant or issued me any paperwork confirming their confiscation of my personal belongings.

They took me to the Domestic Security Division of Luliang County before finally sending me to the Luliang County Detention Center. While I was detained there, Luliang County Police Department issued a detention notice [No. 98 document for year 2010] with Chen Shucai and Li Guixiang’s signatures on it.

Chen Shucai from the police department called me on May 17, 2010 while I was working in the fields together with my wife.

I was deceived into going to the Majie Police Station, only to realize that it was a trap when I got there.

At the detention center, I was forced to string beads from 7 a.m. till night every day. I was not allowed to sleep whenever I failed to finish my quota. Twice the guards also ordered inmates to beat me for not stringing enough beads.

During my detention there, officials from Luliang County's 610 Office and Domestic Security Division came to interrogate me a total of five times. When I refused to inform on my fellow practitioners, they threatened me with a heavy sentence.

Ironically, the police department issued an arrest warrant for me on June 9, a few weeks after my arrest.

In September, the Qujing City Procuratorate illegally indicted me [No. 229 document for year 2010], charging me with “using a cult organization to interfere with law enforcement”. The prosecutor was Xiao Yanfei and the deputy prosecutor was Long Minghui.

The Qujing City Intermediate Court opened my trial in the Luliang County Court one month later. Before the trial, they didn’t inform my family as required by law.

My wife managed to find out about the hearing and came to audit the session. Judge Gao Puqiang didn’t allow me to talk at all during the trial, and he adjourned the session without issuing a verdict.

I was sent back to the detention center after the trial.

On December 3, 2010, I received the verdict [No. 228 document for year 2010] at the detention center. The verdict bore the signatures of judge Gao Puqiang, clerks Zhao Jundong and Bai Hua, and secretary Zhang Rui. They didn’t have any evidence against me, yet they sentenced me to four years.