Ms. Zhang Chunhe Recounts Abuses at Guangdong Women's Prison: “I Was in a State of Horror Every Day”

(Minghui.org) Ms. Zhang Chunhe from Zengcheng City, Guangdong Province was 49 years old when she was illegally arrested by police from the local 610 Office on July 23, 2008. Despite the fact that she suffered from a large fibroid tumor, she was sentenced to three years in prison for her belief in Falun Gong.

The following is Ms. Zhang Chunhe's account of her experience of being subjected brutal torture for five months in the 4 th Division of Guangdong Women's Prison. It is unclear from her statement whether she was released after five months due to her health condition, or whether she was imprisoned in another department or facility for the remainder of the three-year sentence.

On July 23, 2008, more than ten police officers from the 610 Office, Domestic Security Division and the local police station waited outside my home. When I came out to go to work, they arrested me and sent me to the Guangzhou City “Law Education School” (brainwashing center).

A medical examination showed that I had a very large tumor (uterine fibroid). The next day, I was sent back to the local detention center by personnel from Zengcheng City. 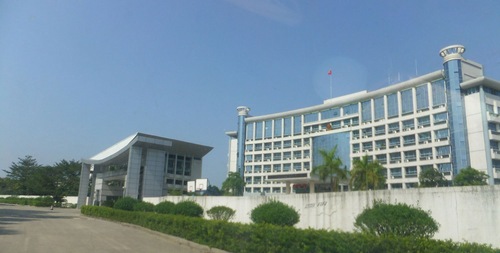 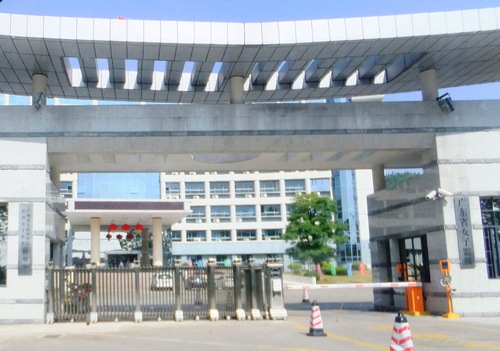 I was sent to the prison hospital for a medical examination and it was confirmed that I had a large tumor, but I was still sent to the 4 th Division of Guangdong Women's Prison.

Despite my condition, I was subjected to five months of torture and brainwashing.

Because of the tumor, I bled in my pants every day and even on the ground, thus I needed to use a lot of toilet tissue and go to the bathroom often.

However, the guards refused to allow me to purchase extra toilet tissue and forbade others from giving me any. I only had five travel-size packs. I had to use one sanitary napkin the whole day without changing. I tried not to drink water so that I wouldn't have to go to the bathroom, thus reducing my need for toilet paper.

During those few months, my tumor quickly grew, from 12.1 cm to more than 16 cm.

They repeatedly forced me to watch videos that slandered and defamed Dafa and Master, and forced me to read slanderous materials.

If I refused to cooperate with them, they would deprive me of sleep. Sometimes, they didn't allow me to sleep for several days in a row.

Deprived of sleep for extended periods of time

Every day I was only allowed to sleep for three or four hours, sometimes only 2 hours. Sometimes I was not allowed to sleep at all. Eventually, I began hallucinating. I had developed a fever, high blood pressure, and my heartbeat became abnormal. In addition, because I bled so much, I became dizzy and my feet kept swelling.

When I tried to report the abuse, the guards retaliated by locking me up in a small cell and tortured me even harder.

Tortured in a small cell

Outside of the small cell, it was labeled as “talking room,” however, slanderous materials were posted all over the walls, such as pictures of the staged Tiananmen Self-immolation.

Every morning at 7:00 a.m., I was forced to go into the small cell and I never knew when I would be taken out.

There was a camera constantly filming me, and two prisoners were always with me, one on each side. From morning until night, they kept playing videos which slandered Falun Gong and Master.

They also forced me to take notes and do “homework.” If the guards weren't satisfied with my homework, they would force me to redo it until they were satisfied. They were trying to wear me down, physically and mentally.

When it was summer, the small cell was like a sauna, and I would sweat all day.

Because of the tumor, I bled on myself every day. However, I couldn't wash except for using the toilet. I was not allowed to take a shower, or a wash cloth.

When it was winter, I was forced to sit in the cell without moving. My feet were frozen and became so numb that I couldn't walk. One guard wearing a thick winter jacket stayed beside me and kept on slandering Falun Gong until late into the night.

By the time I was taken back to my regular cell it was late at night, but I was not allowed to sleep. Instead I had to sit on the cold ground to write a statement. I was seldom allowed to sleep before midnight, and I was usually forced to stay awake until 2-3 a.m.

Because I was locked up in a small, cramped cell for a very long time, my legs swelled badly, and I couldn't stand up or squat down. Once I fell over in the bathroom.

During the days when I was detained at the 4 th division, I was living in a state of horror every second.

Related articles: Ms. Zhang Chunhe Has Been Detained for Seven Months, Now in Serious Condition Ms. Zhang is in Critical Condition at the Zengcheng City Detention in Guangdong Province (Photo)

“Is It Sickness Karma or a Chance to Elevate Xinxing?”