(Minghui.org) A Member of Provincial Parliament in Ontario, Mr. Jack MacLaren, had an unexpected and disturbing encounter with representatives of the Chinese Communist Party (CCP) recently.

He received an unsigned letter from the Jiangsu branch of CPAFFC (Chinese People's Association for Friendship with Foreign Countries), a CCP organization, on January 13, 2014. The letter demanded that he withdraw his support for Falun Gong and urged him to ask his colleagues to do the same.

Mr. MacLaren stated that the demands of CCP organizations have no influence over his decisions. On the contrary, he said, the letter has prompted him to step up his efforts to support Falun Gong practitioners. 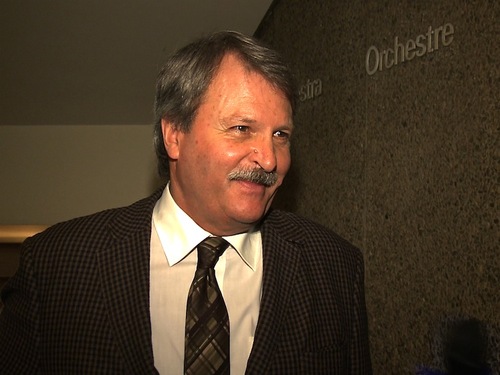 Mr. MacLaren stated in an interview with New Tang Dynasty Television: “I have spoken publicly in support of Falun Gong as an organization and as a people practicing a very peaceful belief. They have principles of Truth-Compassion-Forbearance. They have a very positive presence in communities in Canada and in China.

“I'm concerned about receiving this letter from the Jiangsu People's Association. It comes from a foreign country, the Country of China. The Chinese communist government would have some influence over this organization and this letter. I'm very aware that in China, Falun Gong suffers persecution.”

He has previously issued congratulatory letters for Falun Dafa Day and openly condemned the crimes of forced organ harvesting in China.

Mr. Shawn Li, president of the Falun Dafa Association of Canada said, “This unsigned letter from the CPAFFC was threatening in nature. It tries to use the economic ties between Ontario and Jiangsu Province to influence provincial affairs in Canada. However, what the CCP did not expect was that their letter would prompt increased support for Falun Gong from the legislator.”

Former St. John's Mayor: The CCP Is “a Loathsome Tyranny”

Mr. MacLaren's case was a more recent example of the CCP's decade-long attempts to extend its persecution outside of China via diplomatic, media and other channels.

After the City of St. John's, capital of Newfoundland in Canada, announced a “Falun Dafa Week” in May 2001, the Chinese Ambassador mailed Canadian politicians letters and materials that slandered Falun Gong. 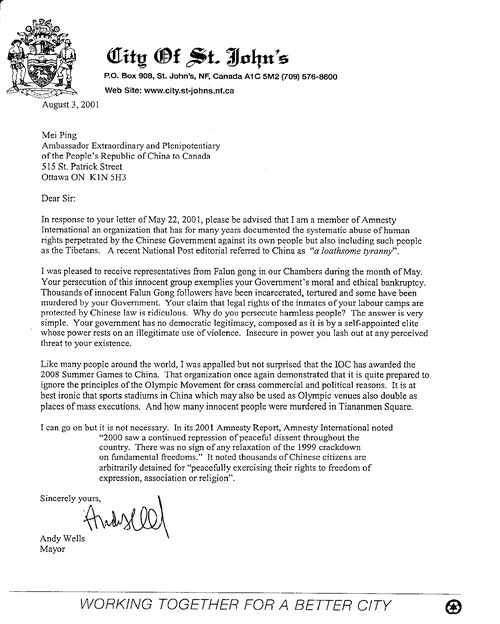 Mr. Andy Wells, the then Mayor of St. John's, wrote a letter back that read, “I was pleased to receive representatives from Falun Gong in our Chambers during the month of May. Your persecution of this innocent group exemplifies your government's moral and ethical bankruptcy. Thousands of innocent Falun Gong followers have been incarcerated, tortured and some have been murdered by your government. Your claim that legal rights of the inmates of your labor camps are protected by Chinese law is ridiculous.”

Former MP: “Once Again I am Proud to Extend Greetings”

At the end of August 2000, Falun Gong practitioners received many congratulatory letters for Falun Dafa Week. The Chinese Ambassador mailed letters to Members of Parliament (MP) and other government officials, urging them not to support any Falun Gong activities in Canada.

MP Gorden Earle was one of the recipients. In his reply, he wrote, “As Multiculturalism Spokesperson of the federal NDP I stand by my letter... Once again, I am proud to extend greetings on behalf of the New Democratic Party of Canada to all who celebrate Falun Dafa Week.” 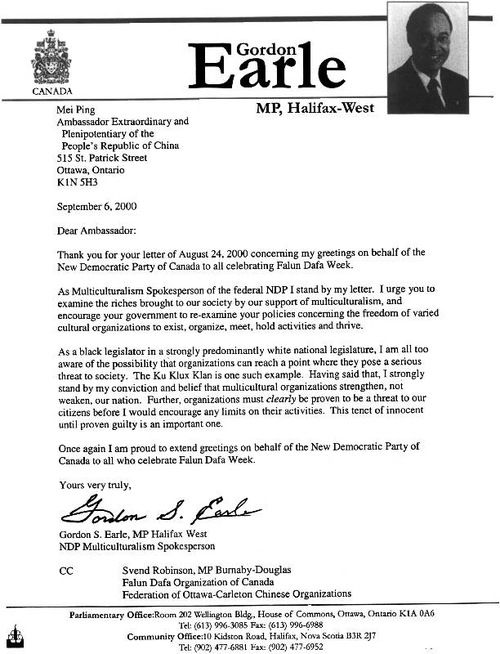 A former MP shared in the past that his reaction to such hate propaganda letters was to throw them into the trash immediately. He once told Falun Gong practitioners that it was hard for different Canadian political parties to reach a consensus on a lot of issues. However, they agree on taking a stand for Falun Gong and condemning the persecution.

The National Post published an article on March 20, 2004, titled “Falun Gong Persecution Spreads to Canada.” The report detailed instances of the Chinese Ambassador to Canada and other staff members of the embassy and consulates slandering Falun Gong via in-person meetings or mailings among politicians and media agencies to instigate hatred towards Falun Gong.

The article said that Mei Ping, China's ambassador to Canada, visited The National Post to slander Falun Gong and left behind a slanderous book. The report stated that the slanders were “without foundation” and that “no other government has ever made about its own citizens who have taken up Li's [founder of Falun Gong] teachings.”

“Writing in March, 2003, to Jim Peterson, a Liberal MP and now a member of Paul Martin's Cabinet, Chu Guangyou, China's charge d'affaires in Canada, warned that China has 'advised the Canadian government of the sensitivity of the issue [of Falun Gong] in the overall bilateral relations. I hope you and your government will understand our position and be vigilant against any attempt of Falun Gong to jeopardize our bilateral relations.' With the letter came the now standard package of anti-Falun Gong propaganda,” the article stated.

The article also exposed how Chinese-language media has been utilized to spread hatred toward Falun Gong. “In August 2002, the Canadian Broadcast Standards Council found that a Vancouver-based, Chinese-language television station, Talentvision, had violated four articles of the Canadian Association of Broadcasters' Code of Ethics as well as journalistic ethics by rebroadcasting anti-Falun Gong propaganda produced by Beijing's state-controlled media.”

According to a report in February 2000 in The Globe and Mail , Canada Security Intelligence Service (CSIS) uncovered "a well-financed Chinese government plot" in the years following the 1989 Tiananmen Square massacre that tried to silence criticism of Beijing's human rights record by taking control of the nation's Chinese-language news media.

“Finland: Candlelight Vigil Calls Attention to the Persecution of Falun Gong in China”