(Minghui.org) General Yue Fei of the Southern Song Dynasty (1103-1142) is a household name for Chinese people. An extraordinary military strategist, he remained loyal to his country and duty despite being undermined by an emperor uncommitted to protecting China's territory because of politics in the imperial court and a treacherous court official who conspired with the Jin (Jurchen) invaders. Ultimately the court official had him killed after charging him with a fabricated crime, but Yue Fei remained true to his principles till the end. His exemplary actions earned him the posthumous title of “Zhongwu” (Loyal and Valiant).

During the Cultural Revolution, General Yue was recast as a villain by the CCP. His tomb in Hangzhou, Zhejiang Province was desecrated and his remains burned by Red Guards. Middle school students in Tangyin County, Yue Fei's hometown, destroyed statues and stone tablets with the general's original calligraphy at his former residence.

Cultural relics were not the only target of the Cultural Revolution. General Yue embodied the ancient Chinese virtue of loyalty. Digging up the national hero's tomb and desecrating his remains was symbolic of the CCP's values: loyalty was considered stupid; being cunning and weighing personal gain over principles was “smart.”

Very few Chinese people upheld the virtue of loyalty until Falun Gong spread in China in 1992. Over the past 15 years of persecution, Tangyin, the hometown of Yue Fei, saw another group of Chinese extending the general's spirit of loyalty in contemporary China.

Falun Gong Flourished in Tangyin after Its Founder's Visit

During his trip to Henan Province in 1997, Mr. Li Hongzhi, founder of Falun Gong, visited Yue Fei's home in Tangyin County on September 11.

Mr. Li made a donation to the renovation project and burned incense to pay tribute to the national hero and his family. He arranged some of the sticks in a circle, with a big bunch in the middle. After lighting them, Master Li asked an employee there to make sure the sticks would burn to their ends. The swirls of smoke filled the house and made the General's former residence look solemn and holy.

Mr. Li composed a poem during his visit to Yue Fei's former residence:

Tragic heroic history gone like running water, Righteous spirit and faithful soul remain in the world; Thousand-year-old left-behind shrine, a place that pains the heart, There is only the loyal heart that shines on later generations.

The employee at the site asked Mr. Li to leave his name, because donors' names would be carved on a stone tablet. Master Li tore off the piece of paper with this poem from his notebook and handed it to the employee. This poem, along with another one written on the same visit, were later published in Mr. Li's book of poetry Hong Yin.

The management at the historical site made a small stone tablet with his poem on it. It was carved in regular script calligraphy. Later, local Falun Gong practitioners found out about this stone tablet. They made a donation for a bigger tablet with the same poem carved in Mr. Li's original handwriting. 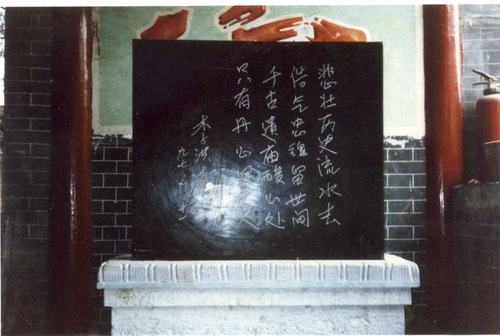 Many tourists and Falun Gong practitioners have been drawn to Yue Fei's original residence. As Falun Gong spread further in Tangyin, a group exercise site was established there.

During the persecution of Falun Gong, that same stone tablet, as many similar ones ruined during the Cultural Revolution, was identified as a political target. On July 20, 1999, the Chinese Communist Party (CCP) banned Falun Gong. The CCP in Tangyin County followed the policy closely. A big rally was held, and the tablet bearing Mr. Li's poem was destroyed publicly.

A month prior to the official launch of the persecution, Zhu Tianbao, then CCP secretary of Anyang City, ordered the Party committee in Tangyin County and county government to “resolve the issue” of the tablet with the poem on June 1, 1999. Following his instructions, the Party committees and city and county level officials worked with the police department and tourism bureau to deal with “the problem.”

On July 3, 1999, the Tangyin County Bureau of Cultural Heritage ordered the tablet's removal from Yue Fei's residence, claiming that it had the authority to manage cultural relics in preparation for a Provincial Cultural Heritage application.

Those who had personally experienced the benefits of practicing Falun Gong were sad to find out that the tablet was removed. Local Falun Dafa practitioners, as well as thousands from other cities, went to Yue Fei's hometown in early July and peacefully asked Tangyin County Bureau of Cultural Heritage to reinstall the tablet. They shared their personal experiences of practicing Falun Gong and how great it was.

Tangyin County Bureau of Cultural Heritage and the County Appeals Office replied that the tablet's removal was an order from higher level administrative agencies.

Ancient Virtue Practiced Again, Even at the Cost of One's Life

Yue Fei is widely considered to be an example of someone who is willing to sacrifice his life for the principle of loyalty. Even though the emperor and the treacherous imperial court official treated him unfairly, he didn't resort to any unrighteous means to protect himself or avoid personal tragedy. He died at the age of 39.

Such spirit was lost in the General's hometown until a group of Falun Gong practitioners demonstrated the ancient virtue again by staying loyal and true to their belief.

The nationwide persecution of Falun Gong was especially rampant in Anyang. To achieve a high “transformation” rate nationally, the CCP officials of the Anyang government, the 610 Office), Domestic Security Division, and police department imprisoned innocent practitioners and attempted to force them to give up their beliefs using torture, forced labor, and financial extortion.

Mr. Zhang Zhenzhong, an undergraduate in the Business Administration School of the Shandong Industrial University, was an outstanding student. At home, he was the pride and joy of his family, and he was beloved by his friends.

When he and three other practitioners went to Tangyin County to clarify the truth about Falun Dafa on May 17, 2001, they were arrested and taken to Tangyin County Detention Center. The police punched and kicked them, and shocked them with electric batons.

They started a hunger strike in protest. A practitioner with the surname of Wang witnessed Mr. Zhang being dragged out for a force-feeding session. Mr. Zhang had been tortured so badly by then that Wang could hardly recognize him. He looked extremely fragile and weak, yet the police still handcuffed him to a chair and repeatedly tried to insert the feeding tube into his nose. They failed four times. On the fifth try, Zhang Zhenzhong cried out in pain and shook uncontrollably. He lost consciousness and died shortly after. He was only 22 years old. 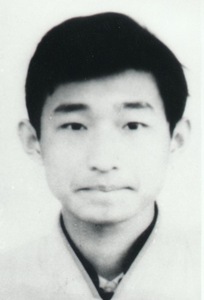 Ms. Wang was beaten severely and tortured with the tiger bench in Tangyin County Detention Center. She lost consciousness several times. She went on a hunger strike for 18 days to protest the persecution. By the time she was transferred to Shen County Detention Center, she was emaciated and on the verge of death. She passed away in the detention center on November 30, 2002. 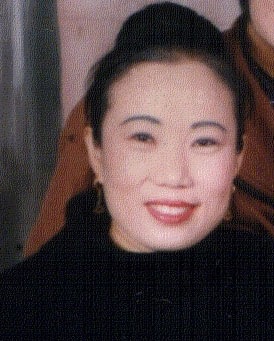 Another woman, arrested with Mr. Zhang and Ms. Wang, was also terribly injured from torture in Tangyin County Detention Center. The center's assistant director, Li Aimin, kicked her in the face and chest until her face was mangled and turned black. She also had blurred vision in one eye. Her broken rib jutted out, appearing as if an egg was placed under the skin. Police used electric batons to shock the three of them and tied them up tightly with rope. Blood covered their faces and bodies. They were dragged on the cement floor until one of the practitioners' kneecap bone was exposed.

In the spring of 2001, she was sentenced to three years of forced labor and taken to Shibalihe Forced Labor Camp in Zhengzhou City, Henan Province.

Ms. Fu went on hunger strikes on several occasions to protest the persecution. She was subjected to verbal and physical abuse, as well as brutal force-feedings. After two years of torture, she was diagnosed with life-threatening pleural effusion and was released for medical reasons. Ms. Fu's activities and her home phone were monitored after her release. Guards from the forced labor camp and agents from the 610 Office "visited" her at home many times to apply pressure on her to give up Falun Gong. Ms. Fu died on March 3, 2010, at the age of 45. 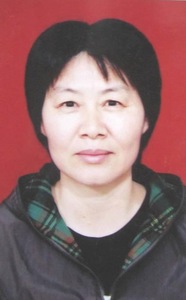 Mr. Yang Zhonggeng, 38, is from Ruian City, Zhejiang Province. He was one of the thousands of practitioners who went to the Anyang City Appeals Office to request the re-installation of the tablet in July 1999.

He was arrested on June 24, 2013, at the Zhengzhou Post Office and beaten to death within 4 days of his arrest, on June 28, by officers in Zhengzhou City, Henan Province. His body was covered with bruises and one of his legs was black and blue. Mr. Yang's parents and other family members were stricken with grief. His mother fainted from the shock and has been unable to speak to this day. 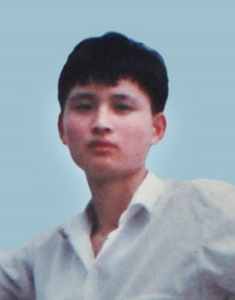 Although the authorities could destroy stone tablets and people's lives, they have been unsuccessful in their attempts to wipe out people's cultural roots and their faith in Truth-Compassion-Forbearance.

The ancient spirit of loyalty lives on in Yue Fei's hometown 800 years later. 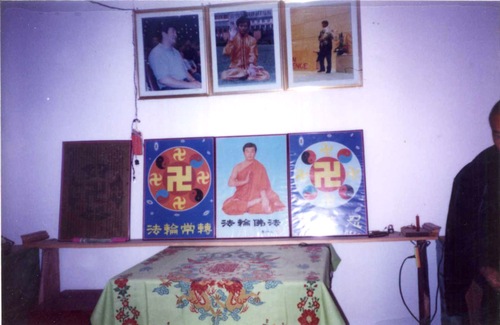 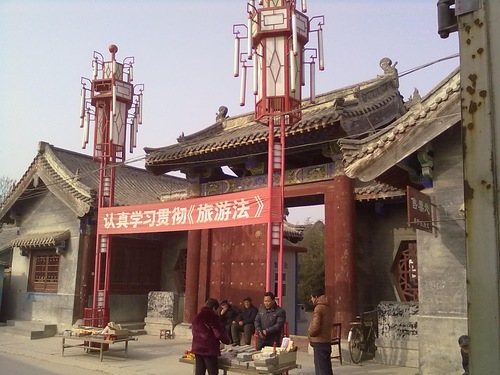 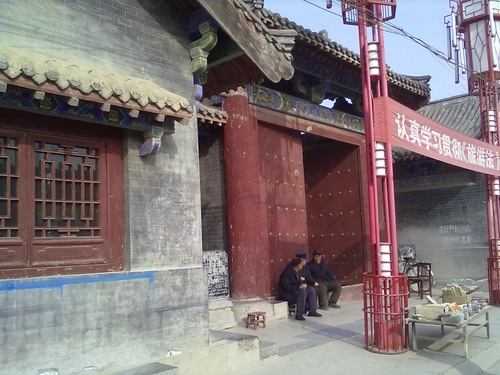 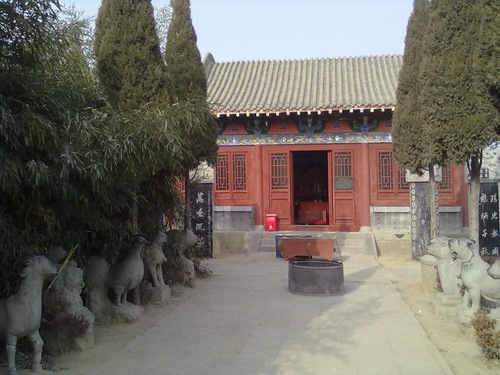 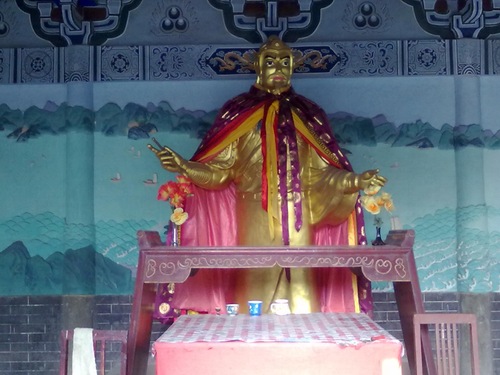 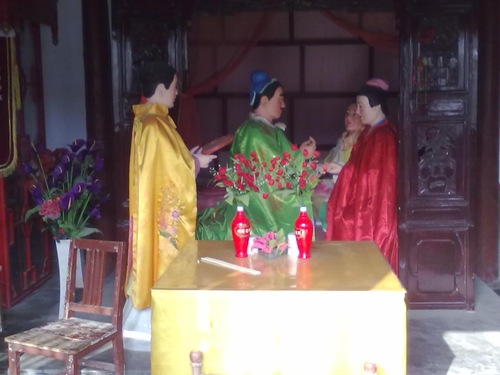 Statue of Yue Fei, his wife, and mother

“Freed from Disability by Practicing Falun Gong, Now Being Hunted by Police for Her Beliefs”

“True Stories about People Who Benefited from Falun Dafa”