(Minghui.org) The Art of Zhen Shan Ren International Exhibition made its debut in Croatia with two consecutive presentations this winter. The artwork presented therein aims to showcase the beauty of Falun Gong, as well as to depict the plight of practitioners amidst the ongoing persecution in China.

The first exhibition ran from December 16, 2013, to January 17, 2014, in the art gallery run by the city council of Lovran, a small town and a popular tourist destination in Croatia. The exhibition received great support from the city council, and local residents expressed pride in being the first town in the region to host the event. 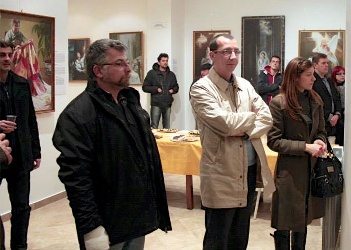 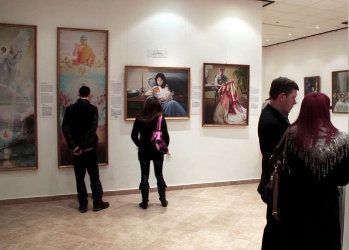 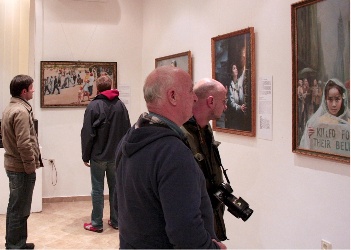 Visitors view the paintings at the two “Art of Zhen Shan Ren” exhibitions in Croatia.

One young man said he was walking by the gallery a couple of days earlier when he caught a glimpse of the paintings from the outside. Impressed by their beauty, he was compelled to visit.

He said he would bring his university colleagues because it was something that "had to be seen." Many people returned to see the artworks for the second or third time, bringing their friends and family members along.

A social worker on holiday from Austria spent a long time looking at the paintings, saying that she was pleasantly surprised to see the exhibition in Croatia. While she had previously heard a little about Falun Gong, the artworks and her conversations with practitioners on site sparked her interest to learn more about the practice.

"Thank you. Very important work to improve humanity," she wrote in the guestbook before leaving.

Angelos, a tourist from the U.K., inquired about upcoming showings in the U.K. that he could recommend to his friends. He left the following message in the guestbook: "My most interesting experience while in Croatia."

“Goodness will win in the end”

After a month in Lovran, the exhibition moved to a gallery on the main square of the city of Rijeka. This time it ran for three weeks, again attracting media attention. In addition to being covered by print and online media, a local radio station ran a report.

The exhibition in Rijeka had many visitors, who expressed great support for the efforts of Falun Gong practitioners and their campaign for freedom of belief.

Some of the comments from the guestbook in Rijeka included the following:

"These paintings are so full of emotion. There is sadness because of the persecution, but there is also hope in the light. Goodness will win in the end... Much love!"

"An amazing story that opened up a new world to me, one I didn’t know existed."