(Minghui.org) Ms. Wang Jing's “On the Ladder to Heaven” recently won the Silver Award at the 2014 International Figure Painting Competition by New Tang Dynasty Television (NTD) in New York. This is her second award from the competition. Her “Return” won an honorable mention in 2008.

“On the Ladder to Heaven”

Ms. Wang has lived in a few different places in China. She learned painting at a young age. She managed to join the high school affiliated with the Academy of Fine Arts in Hangzhou, Zhejiang Province and earned a college degree from the academy in 1998.

Often smiling with sparkling eyes, Ms. Wang comes across as a warm-hearted woman. In her demeanor, there's no trace of the brainwashing, torture and forced labor she experienced in China.

She introduced her painting, explaining how “a girl has understood how to be a good person and the meaning of life upon reading the Falun Gong book Zhuan Falun. Layers of heavenly scenes unfold before her eyes. She is enveloped by compassionate energy. Her face shows joy and gratitude. Her belief in Falun Gong grows firm.”

“I have always wanted to depict such joy, a real experience that every Falun Gong practitioner has lived at one time or another,” she said. “This is the key to understanding why such a large group of people can persevere in their belief even in the face of brutal persecution in China. Because they have truly lived and felt the magnificence and beauty of Falun Gong.”

Ms. Wang had such an experience while imprisoned for her belief at Shandong No. 1 Women's Labor Camp. Guards ganged up on her and surrounded her while yelling, slapping her, and hitting her in the head. They deprived her of sleep for several days in a row. She was beaten to the ground. A tall man pinned her down, grabbed her hand and forced her to sign a “guarantee statement” renouncing Falun Gong.

The joy of cultivation and higher awareness sustained her during the three years of suffering at the labor camp. In turn, more beauty and insights were revealed to her. She developed an understanding of the relationship between an artist's moral character and artistry: “When my moral character reaches a certain realm, my technique also improved.”

Ms. Wang said that she spent four months working on the award-winning piece. “I wanted to show the inner feeling and power of Falun Gong to touch one's heart. I wanted to show the kind energy, purity, and righteousness. The choice of colors and tones for the mood were important.” 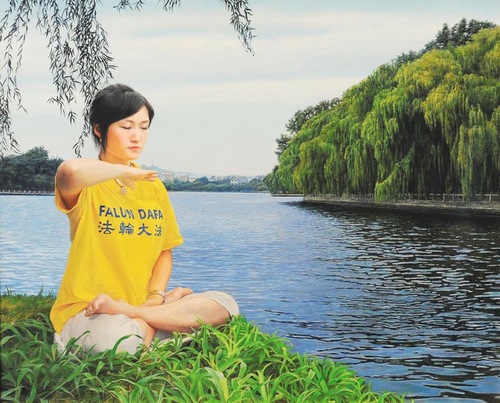 She said she would continue her efforts on the path of “elevating my artist level and showcasing the pure and kind beauty by adhering to traditional values and artistic standards.”