(Minghui.org) Over a thousand college students and faculty members in Lisbon, Portugal signed a petition to call for an end to the state-sanctioned organ harvesting of prisoners of conscience in China.

Falun Gong practitioners in Portugal launched a campaign to raise awareness of China's forced organ harvesting from prisoners of conscience, the majority of whom are Falun Gong practitioners. Their efforts won the support of school administrators, who gave them permission to air informational videos, distribute materials and collect signatures on school premises. 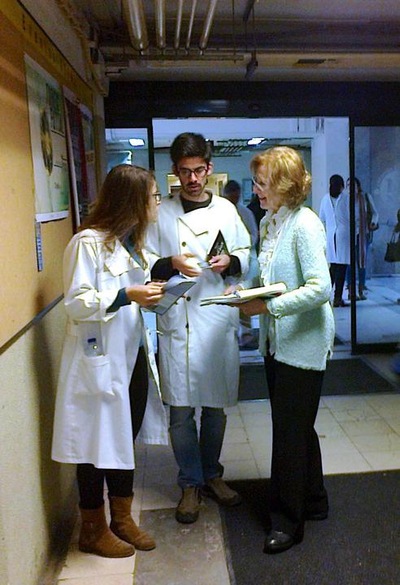 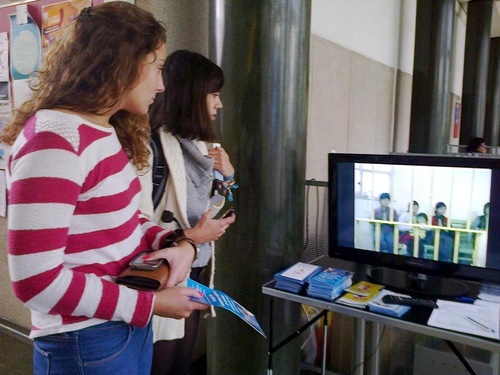 Law Student: Thank You for This Opportunity

A law school in Lisbon provided an area for Falun Gong practitioners to air the award-winning documentary Davids and Goliath on November 24.

One student was in tears when he signed the petition. When a practitioner thanked him, he threw both arms in the air and said, “I thank you very much for this opportunity to help rescue those detained in China!”

Two other students wanted to sign the petition but were running late for class. The practitioner told them, “Don't worry. Your professor will still be there. Human rights is part of your mandatory curriculum. This issue [of organ harvesting] is very much related to your studies!”

The students agreed and signed the petition before hurrying to their classrooms.

The dean of a liberal arts school heard about the persecution in China and the forced organ harvesting and allowed the practitioners to hold their signature drive at the entrance of the school lobby. He also told them, “If one day is not enough, I will give you an extra day.”

A student from Brazil cried after watching Davids and Goliath. She was confused, however, because some of her classmates who had studied Chinese at the school's Confucius Institute had told her negative information about Falun Gong, as a result of influence by the Chinese Communist regime's hate propaganda.

The practitioner explained that the Confucius Institutes are mouthpieces of the Chinese Communist Party (CCP). The Party vilifies Falun Gong to justify its violent suppression of the group in China. Meanwhile, Falun Gong is gaining popularity in the rest of the world, where increasing numbers of people are taking up the practice.

Upon hearing this, she indicated more interest in learning the Falun Gong exercises.

Practitioners also collected signatures at a medical school. Many nurses and doctors in the hospital affiliated with the university gave their signatures to help those being persecuted in China.