(Minghui.org) Today's news from China includes incidents of persecution that took place in 14 cities or counties in 7 provinces. According to this report, 39 Falun Gong practitioners were subjected to mistreatment during their detention, and at least 3 practitioners were illegally arrested. 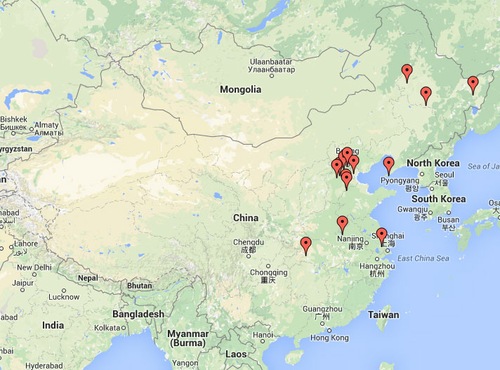 Mr. Gao Jingxiao, who was arrested on December 17, 2014, escaped and had to leave her home to avoid further persecution.

Ms. Han Yuzhuo is being held at a detention center in Baoqing County. She went missing on December 17, 2014. She was arrested by a plainclothes officer on the evening of December 18, 2014, for distributing Nine Commentaries on the Communist PartyDVDs.

Ms. Pang Haifeng was sentenced to a three-year prison term by the Dezhou Court, and taken to the Jinan Women's Prison.

Ms. Wang Yusi and Ms. Ma Dongmei were arrested in late August 2013. Their arrests were approved, and they were each sentenced to six years in prison. They were taken to Liaoning Women’s Prison on December 2, 2014, but were returned to the Dalian Detention Center because they failed the physical exam. Two weeks later they were again taken to the same prison.

Ms. Guo Baohua was detained by officers from the Chaoyang District Police Department on December 9, 2014.

Ms. Sun Lianfang went to the Wujia Town Police Station on the morning of December 19, 2014, as ordered by officer Zhang Xiaojiang. She was interrogated, and officer Wang Wenjun demanded that she sign the interrogation document. He threatened that she would be investigated by officers from Shuangcheng City if she refused to sign.

Wang also called Ms. Zhao Shukun and ordered her to come to the Wujia Police Station to be interrogated and sign a document. Ms. Zhao refused.

Five officers from the Wujia Police Station broke into Mr. Wang Kesheng’s home and confiscated his computer, printer, and other items in October 2014.

Ms. Zhang Yuhua has been held at the Gaobeidian Detention Center for a year.

Ms. Cui Rongfen has been detained at the Hengshui City Detention Center for more than four months. She is in poor condition. She could no longer can walk unaided when she met with her lawyer recently. Cao Guang, deputy captain of the Domestic Security Division, submitted her case to the Jing County Procuratorate for prosecution.

Ms. Cao Huiying, who was released from Nantong Prison on November 17, 2014, was arrested again and taken to a brainwashing center.

Ms. Xi Kunying was secretly tried by the Wangdu County Court on December 9, 2014.

Ms. Zhang Yayu was arrested by director Li Jizhong and officers from the Yingdong District Police Department in early December 2014, for distributing desk calendars containing messages about the persecution of Falun Gong. The police confiscated her computer.