(Minghui.org) It was completely dark by 3 p.m. on December 10 in Helsinki, Finland. In the evening light, local Falun Gong practitioners held a candlelight vigil to mourn the thousands of practitioners killed in the 15-year persecution in China. They also held a signature drive to encourage people to call for an end to the persecution. 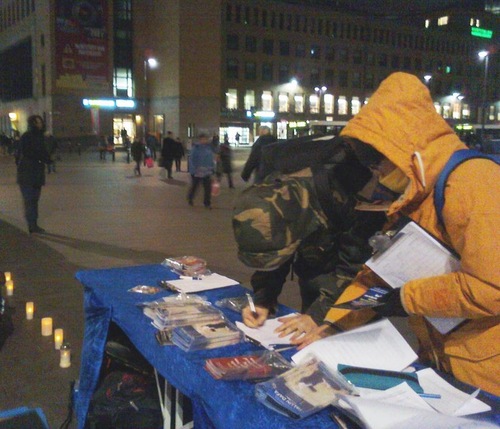 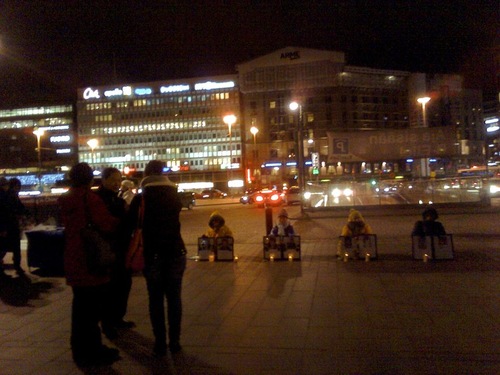 Candlelight vigil in Helsinki on December 10, to mourn those who died in the 15-year persecution of Falun Gong in China

During the event, Ms. Zhu Luoxin shared her first hand experience of persecution. She was imprisoned for 10 years in China before she managed to come to Finland. Ms. Zhu said, “I was illegally sentenced simply for persevering in my belief. I was subjected to solitary confinement, and non-stop 24-hour interrogation on the tiger bench. I was shackled to the ground for a long time.

“The most brutal of all, however, was to go through brainwashing with the Chinese regime's propaganda in a small cell. The physical and mental tortures left me permanent scars.”

Many passersby were drawn by the tranquil music and the posters about the Chinese Communist Party's forced organ harvesting from living practitioners imprisoned in the persecution. They signed the petition to call for an end to the atrocities.

Practitioners also recommended the award-winning documentary Davids and Goliath, which chronicles the Chinese regime's organ harvesting atrocities and the hard work being done internationally to expose and end these crimes.