(Minghui.org) Today's news from China includes persecution that took place in 10 cities or counties in 9 provinces. According to this report, 2 practitioners were subjected to mistreatment during detention, at least 11 practitioners were illegally arrested. 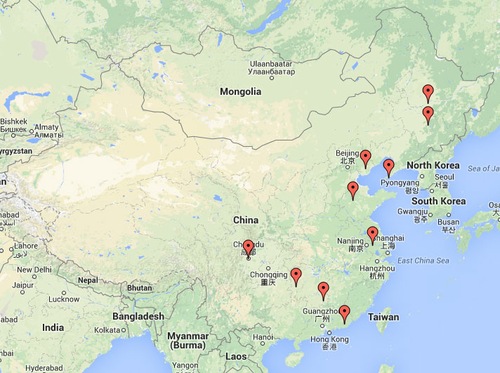 Ms. Guo Shuyun and her husband went to visit their relatives in Meishan on November 29, 2014. They were arrested and their home ransacked by police.

Mr. Jiao Zhensheng, about 70; Ms. Wang Yuxia, about 60; and Ms. Zhao Jianying, about 50, from Luan County went to a farmers' market in Fangezhuang, Changli County, to talk to people about the persecution of Falun Gong in the morning of November 30, 2014. They were arrested by officers from the Zhugezhuang Police Station. Mr. Jiao has been released, while the other practitioners are detained.

Mr. He Linguo was playing programs about Falun Gong on an MP3 player on September 26, 2014. Fan Zhongwu from the Xinning community and Liu Yongyue, Party secretary of the Xining Political and Legal Affairs Committee, took him to the detention center. He has since been released.

Officers from the Gangyao Police Station in the Longtan District arrested Ms. Huang Xiuhuan on November 14, 2014. She was transferred to a detention center on November 29, 2014.

Ms. Cai Diyun from Xinglong No. 1 Village was arrested by plainclothes officers from the Jinan Domestic Security Division on the night of November 29, 2014. She was taken to the detention center in Dianzi Village, Zhonggong Town, Jinan.

Ms. Yang Linzhen was arrested at home by officers from the 610 Office on the night of December 1, 2014.

“Tilanqiao Prison in Shanghai: Alcatraz of the Orient”