(Minghui.org) The 2014 Mexico Falun Dafa Cultivation Experience Sharing Conference was held on November 22 in Mexico City. Practitioners from 10 states in Mexico, as well as from Texas, attended the event.

Eleven speakers shared their cultivation experiences and insights gained in various projects to raise awareness of the persecution in China. Among the prepared talks, some practitioners spoke about how they let go of human attachments or notions and treated the Fa as Master. Some shared how they advanced diligently after joining group Fa study, and others spoke about how they looked within amidst conflicts. 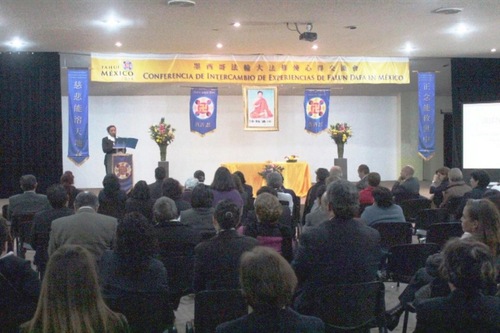 A practitioner who has cultivated for three years encountered a number of severe tribulations in her life. She later understood that it was because she followed other practitioners, but not the Fa teachings, when she worked on projects. She saw her impure intentions and human notions, and shared her hard-earned lesson: One has to study the Fa with good concentration and a calm heart.

Another practitioner said that he grew complacent and thought he knew everything there was to know after studying Zhuan Falun and other recent lectures of Master Li a few times. He gradually slacked off in Fa study.

As a result, he found himself less diligent in his cultivation. He realized later that Fa study was indeed the most important. He returned to group Fa study. He shared, “Group Fa study enables me to advance diligently and helped me realize that I need to be more diligent in saving sentient beings and clarifying the truth.”

A Mexican practitioner who now lives in Austin, Texas started practicing in Mexico. She is the only Latino practitioner in her Austin Fa study group. The coordinator asked her to be in charge of Shen Yun promotion in the Latino communities there.

She was afraid of speaking English initially, because she wasn't confident with her language skills. However, as she was the only one doing the project, she had no one else to rely on.

Diligent Fa study and sending forth righteous thoughts helped build her confidence. She made great efforts in her locale and even helped promote Shen Yun in other cities.

When the coordinator in Mexico didn't call her or delegate any “important roles” to her when she visited Mexico last year to help with local Shen Yun promotion, she felt ignored and at a loss. She later realized that compared to being “important,” letting go of self was more critical. Letting go of the attachment to being acknowledged was what she needed to learn.

Therefore, she strengthened her Fa study and sending forth righteous thoughts. Soon after, she was given the assignment of promoting Shen Yun to corporations! In this capacity, she and her fellow practitioners met a lot of businessmen and made great progress. Things went smoothly, as if everything had been prearranged. Her experience showed her that eliminating her attachment was a prerequisite for assimilating to the group effort of promoting Shen Yun.

Attendees take a group photo at the end of the experience sharing conference.

Another Mexican practitioner shared, “When I arrived at the conference venue and saw Master's picture, I was very moved by the solemnity of the atmosphere. I felt that Master was here with us.

“Several group exercise sites had conflicts prior to the conference. Now we have let go of our grudges and conflicts, and joined the same conference with a pure heart. It's so touching! Every speech was well-prepared. I saw many people shedding tears during the event. We all feel that Master is with us. The event will help us all be more diligent here in Mexico.”

“No Medical Parole While Alive; No Return of the Body After Death”