(Minghui.org) Falun Gong practitioners in Indonesia were invited to participate in the Folk Culture Parade sponsored by the Indonesian Ministry of Tourism and the Jakarta City Government on November 2, 2014. Many government officials, community leaders and artists participated in the parade which was held to honor Indonesia's newly elected leader. 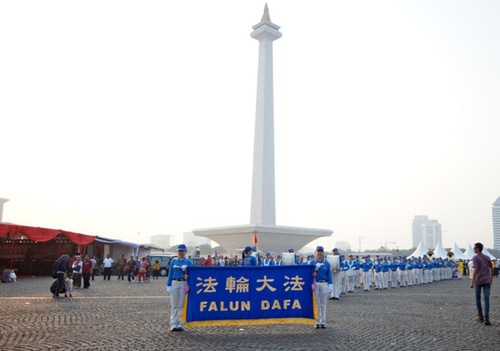 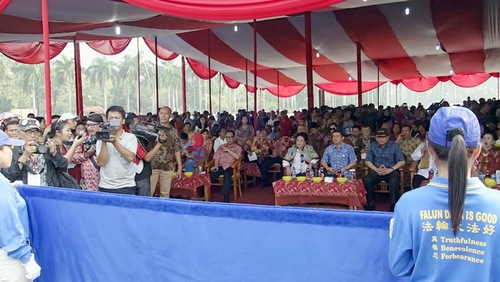 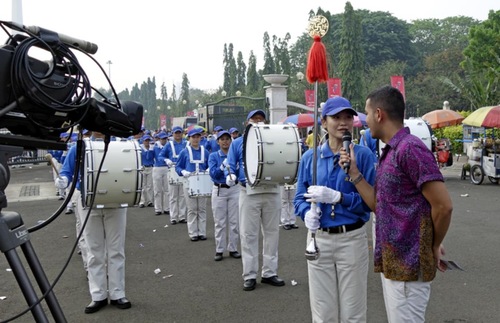 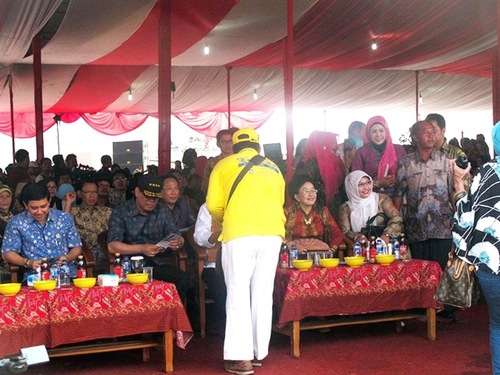 Impressed by the performances of the Divine Land Marching Band and Waist Drummers, composed entirely of Falun Gong practitioners, at the Indonesian President's Inauguration on October 20, the parade organizing committee once again invited practitioners to participate in this cultural event. Twenty-five groups from different provinces participated.

The event was officially opened by the Coordinating Minister for Political, Legal and Security Affairs, Tedjo Edy Purdjianto and the Minister for State for Administrative Reform, Dr. Yuddy Chrisnandi. Many community leaders were in attendance and gathered at the stage of honor.

The Falun Dafa procession this time consisted of the Divine Land Marching Band and practitioners in golden exercise outfits performing the Falun Gong exercises. As they marched by the National Monument, they were warmly cheered by the thousands of spectators gathered there.

Several media outlets covered the event. A reporter from RTV television interviewed the conductor of the Divine Land Marching Band and read an article written by practitioners about the benefits of Falun Gong during the live broadcast.