Toronto: Celebrating the 10th Anniversary of the Nine Commentaries on the Communist Party

(Minghui.org) The Nine Commentaries on the Communist Party, a book that triggered a movement among Chinese people to quit the Party, was published in 2004.

Falun Gong practitioners in Toronto, Canada, celebrated the 10th anniversary of the book's publication on November 24. They wanted to show their support for the 180 million Chinese who have quit the Party and its affiliated organizations.

Practitioners held up a wall of banners at the corner of Bloor St. and St. George in the rain. They handed out materials, collected signatures to protest the persecution of Falun Gong, and called for the end of the Chinese Communist Party's (CCP) tyrannical rule. Several Chinese people quit the Party at the event. 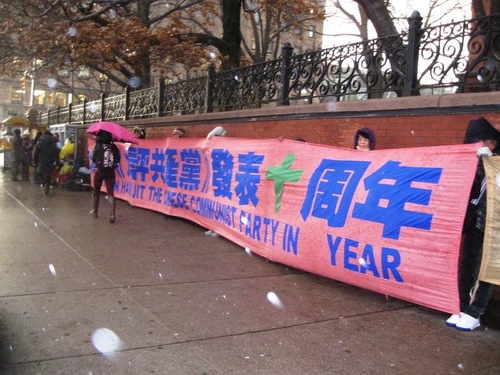 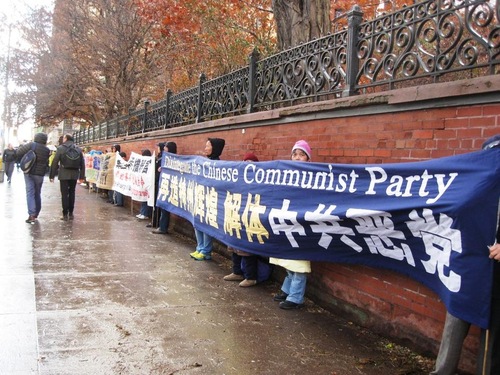 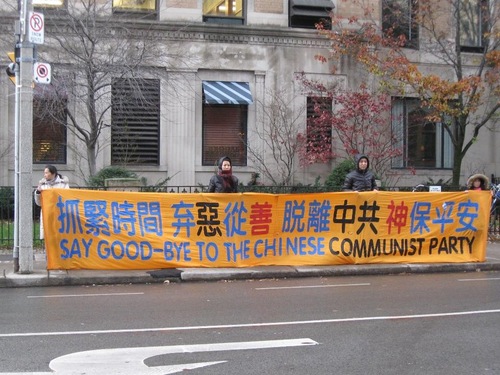 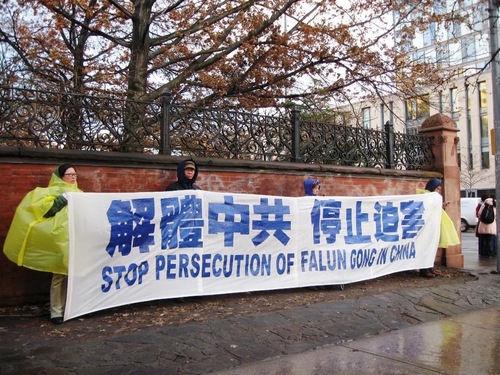 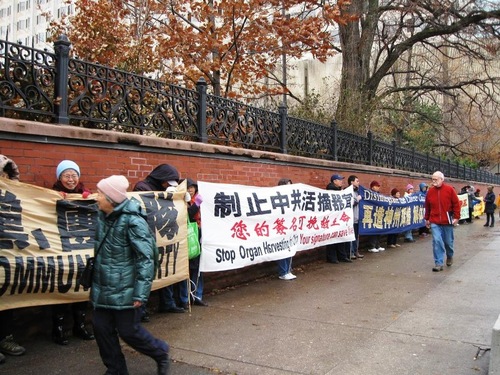 The wall of banners, calling for the end of the persecution. 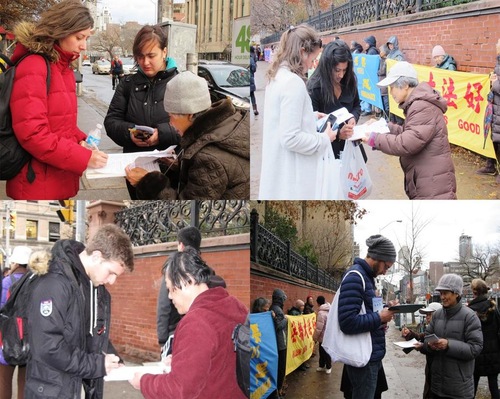 People Are Awakening to the Truth

Ms. Zhou Chuanying, 69, often goes to the local tourist spots to talk to the Chinese tourists about the evilness of the CCP and try to persuade them to quit the Party. She thinks that it has gotten easier to help the Chinese people see the truth.

“Many Chinese government officials read our materials carefully. They talk to us, because they want the details about Falun Gong. After quitting the CCP, some of them have even shouted, 'Falun Dafa is good!' Many people tell us that they heard about the trend to quit the Party in China and are glad to have a chance to announce their resignations here with us,” Ms. Zhou said.

Ms. Du Limei, 67, has gone to the Chinese consulate, located very close to the Bloor and St. George protest site, every day for more than a decade. All she wants is for the people to know what Falun Gong really is and how brutal the persecution is.

According to Ms. Du, the Chinese people, including the consulate officials and those coming to the consulate on business, have changed their attitudes in the last few years. She gave a few examples.

“Several Chinese security guards at the consulate were hostile to us years ago. They even tore up our materials. But now, they are friendly and say hi to us every day. Some of them even accepted our materials. Also, more and more Chinese people coming to the consulate on business are willing to quit the Party with our help.”

Annuo Cao immigrated to Toronto from China when he was five. He passed by the event and had a chance to talk to a practitioner for a long time.

Annuo has been stressed out and dropped out of college for a while. He looked for answers to the age old questions about life, the universe and everything, but never found them. However, he enjoyed his conversation with the practitioner.

“I can feel their positive energy. I saw the hope,” Annuo said. He signed the petition, anticipating that his encounter would be a turning point in his life.

“I have been looking for something. Today, I had a chance to learn a lot. This might be a new start in my life. I will go online to learn more about Falun Gong,” he said.

Timitin, a Toronto University student from Saudi Arabia, was shocked to learn about the brutal persecution of Falun Gong taking place in China. “I saw Falun Gong on my campus a few months ago. I signed on the petition. If possible, I want to sign again,” he said to a practitioner. “Your event is very important. We should let more people know about it. Everybody should stand up against the persecution.” 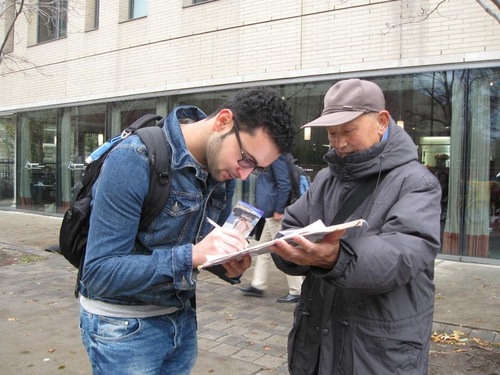 Timitin, a student from Saudi Arabia

“South Korea: Divine Land Marching Band at the Opening of the Marathon in Pyeongtaek”