“Thank You for Giving Me this Chance to Quit the Party”

(Minghui.org) “I don't like the communist party, which has killed a lot of Chinese. I didn't know about it when I joined the Young Pioneers (an affiliate of the Chinese Communist Party) as a little kid. Thank you for giving me this chance to quit,” Mr. Zheng, who is Chinese and lives in Philadelphia, said to a group of Falun Gong practitioners at a rally in Chinatown on Sunday.

Many Chinese residents took in the Falun Gong rally, which aimed to expose the brutal history of the Chinese Communist Party (CCP) and encourage Chinese people to quit the Party and/or its two affiliated organizations. 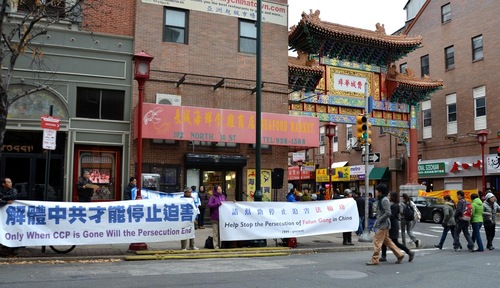 Activity in Chinatown, Philadelphia, to expose the crimes of the Chinese Communist Party 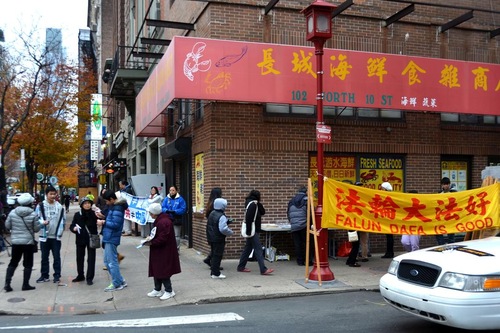 Handing out flyers at the rally 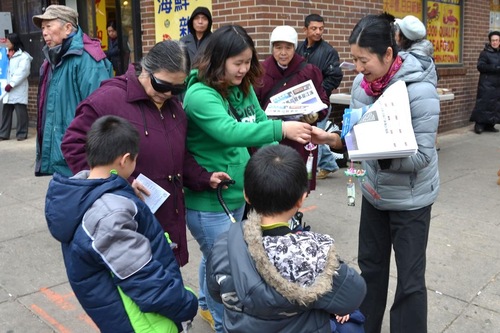 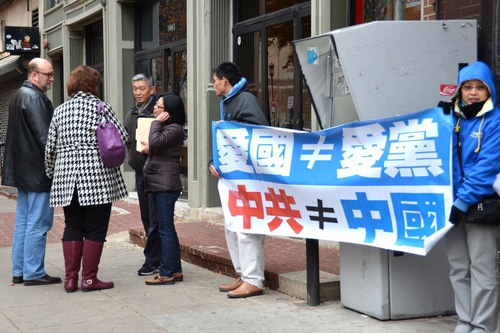 Dr. Fang, the rally organizer, said that theNine Commentaries on the Communist Party, published 10 years ago by The Epoch Times newspaper, has triggered a global movement to quit the CCP. As of now, 180 million people have quit the Party and its affiliated organizations.

“The Nine Commentaries has been translated into 19 languages,” Dr. Fang said. “We are holding this rally in hopes that more Chinese will recognize the evil nature of the party and abandon it.”

Mr. Wang, a local Falun Gong practitioner, said in a speech at the rally, “The Party has brought disaster to China. The tragedies won't stop until the people renounce it. Only then will the Chinese people be liberated.”

Mr. Wang, who came to the United States not long ago, said, “The number of withdrawals from the CCP – 180 million – is significant. I am glad that so many Chinese have woken up and will have a bright future.”

Many Chinese residents in Philadelphia's Chinatown expressed their support for the rally.

One of them, Mr. Xiao, talked to practitioners for a long time. He said, “Over the past 70 years, I have witnessed the crimes of the CCP. I have experienced even more than what the Nine Commentaries exposed. Everybody in the world knows what the CCP is. There are no words to adequately describe just how evil it truly is.”

Mr. Lin said, “How many Chinese people have been killed by the Party? It should collapse soon. I want to quit it!” A young mother echoed Mr. Lin's feelings, saying, “Thank you for holding this activity.” She also asked practitioners what she could do to help stop the persecution of Falun Gong in China.

When asked if he was willing to quit the Party, a restaurant owner said that he had never joined any communist organizations, but he would like to help practitioners encourage others to quit.

“I like watching your activities. I also like reading The Epoch Times. Can you guys put some copies of the newspaper in my restaurant? I believe my customers will enjoy reading it, too,” he added.

In just a few hours, 54 Chinese people formally announced that they were quitting the Party.

“Courage and Wisdom Come from Cultivation in Dafa (Part 1)”