(Minghui.org) Australian practitioners held an event in Brisbane's Chinatown on the morning of November 8, 2014, to commemorate the 10th anniversary of the publication of the Nine Commentaries on the Communist Party. Many Chinese tourists learned about Falun Gong by reading the banners and posters. Some also took pictures. 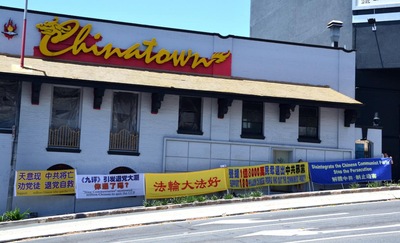 Many local residents were very supportive, saying: “I support you!” “Good luck!” “Keep it up!” Drivers also honked in support.

“I know that the Communist Party is vicious,” said a Myanmar man, who spent time reading the banners and posters in detail. “We have also experienced this back in Myanmar.” He said more countries needed to step forward to support Falun Gong and stop the persecution. He also hoped the suppression would end soon.

Chinese tourists, in particular, were interested in the banners that said, “Stop the Brutality of Live Organ Harvesting” and “Bring Jiang Zemin, Luo Gan, Liu Jing, and Zhou Yongkang to Justice.” Many came up to read them and take pictures.

A middle-aged man who read the banners carefully said, “I did not know Falun Gong was allowed in Australia. Is this for real?” A practitioner told him that Falun Gong was well received throughout the world, except in China. She also explained how the Chinese Communist Party (CCP) has been deceiving the Chinese for the past several decades. The man nodded, “Yes, you are right.” 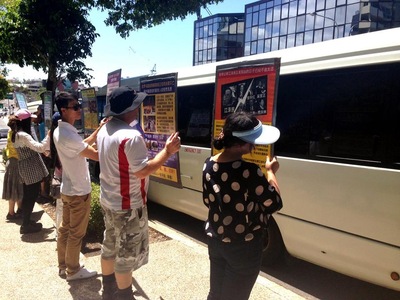 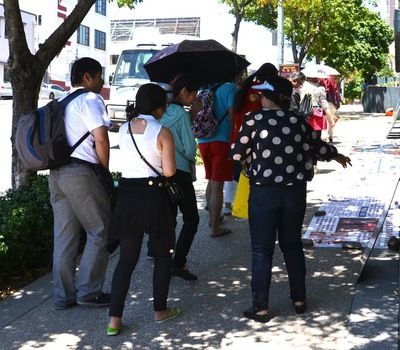 Practitioner volunteer Gege said many tour guides became supportive after learning the real story of Falun Gong. One day when a tour group passed by practitioners doing the Falun Gong exercises in Southbank, they asked their Chinese tour guide, “What is that?” The guide replied, “That is Falun Gong--it is not forbidden in Australia.” After standing with the tourists and watching the practitioners do the exercises for a while, he pointed to the pamphlets near the posters, “Those [Falun Gong] materials are free. Take some and read them. You will benefit from it.”

As the tourists took materials and took pictures, the tour guide added, “Falun Gong is very popular outside China. You can see them [practitioners] at all major tourist sites.”

Bai, another practitioner volunteer who often goes to Chinatown to tell people about Falun Gong, said more and more Chinese have decided to quit the CCP after learning the truth. “What these people see here is very different from what they see in China: fresh air, freedom, and Falun Gong practitioners doing the exercises. Around the world about 120,000 people quit the CCP organizations every day,” she said.

“Some of them quit after hearing about the brutal persecution, including organ harvesting from living practitioners; some decide to do so after seeing the consequences of those who played a critical role in the persecution. After all, everyone wants a safe, better future.”

“Mr. Zheng Guolin Passes Away after Being Imprisoned for 3 1/2 Years”