(Minghui.org) Falun Gong practitioners in Japan participated in the two-day Iichan Cultural Festival of Iijima-Machi, Nagano Province, held on October 25-26, 2014. They shared the beauty of Falun Dafa (also known as Falun Gong) with local citizens to raise awareness of the persecution in China that has persisted for more than 15 years. 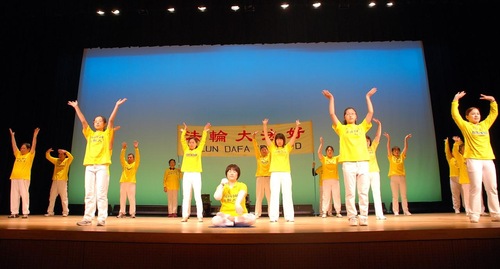 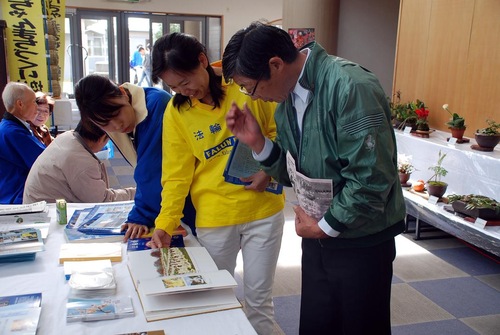 A practitioner talks to a visitor about Falun Gong

The cultural festival, which originated in 2005, attracted 50 groups to participate, which was double the number at the first cultural festival. Festival goers visited the practitioners' booth where they read Falun Dafa books and listened to practitioners talk about how the practice has been embraced by people from around the world. They also learned how practitioners in China have endured brutal persecution perpetrated by the Chinese Communist Party (CCP).

Some of the visitors learned for the first time about the practice and the persecution. They were amazed that the practitioners remained steadfast in their belief amidst the CCP's brutal suppression, and during their efforts to raise awareness and call for an end to the persecution worldwide.

Several people wanted to learn more about this ancient cultivation practice after they understood it, and watched the practitioners do the exercise demonstration on stage.

Upon learning that the CCP has gone so far as harvesting organs from living Falun Gong practitioners, a middle-aged man said that everyone knows that the CCP is dictatorial, but he had never expected that it had committed such heinous crimes. He admired the practitioners' steadfastness in their belief under such tremendous pressure. "You're remarkable," he said.