(Minghui.org) On October 26 the Global Service Center for Quitting the CCP (Chinese Communist Party) held a rally at City Square in Melbourne to support the 180 million Chinese who have renounced their communist memberships.

The uplifting music performed by the Divine Land Marching Band and the waist drummers caught the attention of many passersby. They chatted with practitioners to learn more about the persecution and signed a petition that called for an immediate end to the persecution of Falun Gong in China. 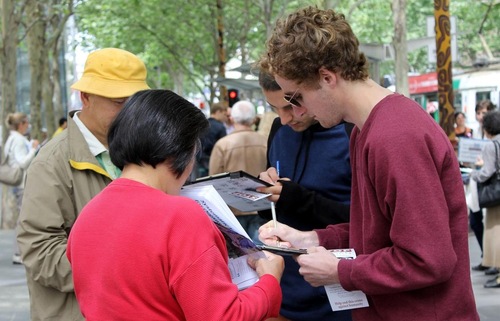 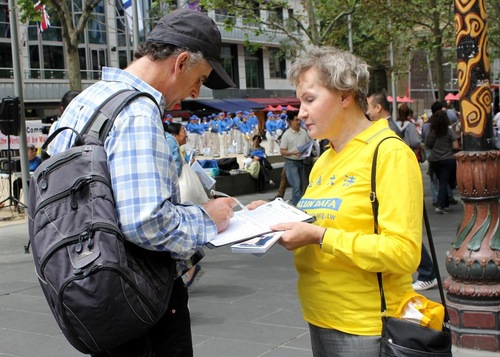 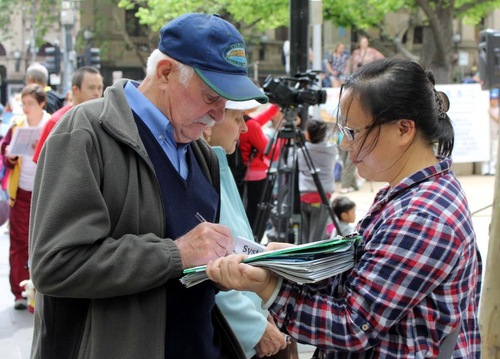 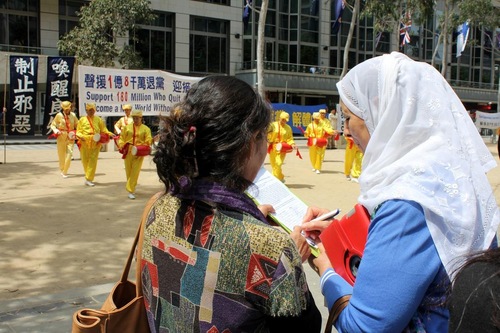 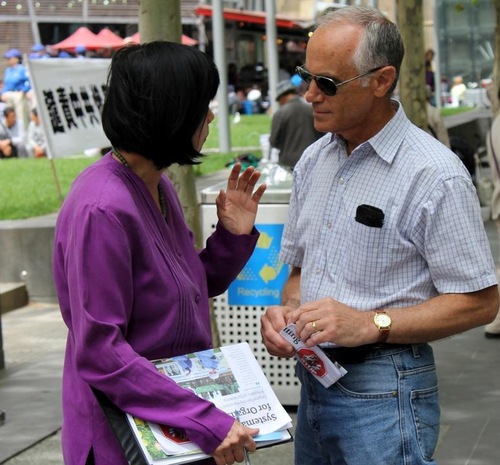 Passersby sign the petition calling for an end to the persecution and chat with practitioners to learn more. 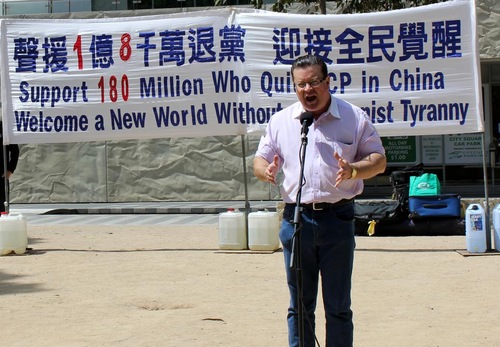 Parliament Member (MP) Bernie Finn said that he knew the CCP was doomed when he learned of the 180 million Chinese who have renounced their memberships: “Communism is anti-nature. Communism is anti-human. Communism must be destroyed. And I would like to offer my support here today to those people in China who are fighting for freedom. I’d like to offer my support to those people in China who wish to stand up for human dignity and for human rights in China.

About 90,000 Chinese per day are dissociating themselves from the CCP, according to the Global Service Center for Quitting the CCP. The movement began in 2004 with the publication of Nine Commentaries on Communist Party, which some U.S. Legislators have described as being as influential as the book Common Sense to the American struggle for independence.

Mr. Finn mentioned in an interview later, “You’ve got to keep telling people the truth, because the truth can’t be crushed. Not even the communist party can crush the truth. And that’s what we all have to do, we all have to keep telling the truth about what’s going on in China, about the violation of human rights, about the degradation of humanity, about all of the vile crimes that the Chinese communists are committing every day.”

Ken Farmer, a passerby who signed the petition, said, “I’m full of sympathy for these people... I’m not a religious person myself, but I think these people should be allowed to practice what they’re doing.” 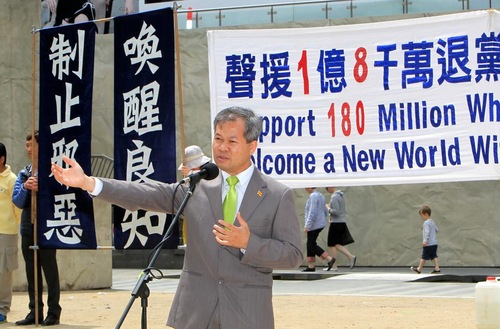 Mr. Bon Nguyen, president of the Victoria Chapter of the Vietnamese Community in Australia

Mr. Bon Nguyen, president of the Victoria Chapter of the Vietnamese Community in Australia, asked, “When we buy food or products that are made in China, should we think about the fact that there are people being murdered by the Party in China? We should ask that, and we should think about that.”

He said that many Falun Gong practitioners who didn't speak English were able to obtain petition signatures near the Chinese consulate, in Chinatown, or at parks such as Fitzroy Gardens.

He noted that "universal values" means that everyone shares the same concerns despite language barriers. He also commented on the close relationship between the CCP's human rights violations and refugees, “If there’s no communist regime, then there are no human rights issues. I know [the CCP] is very selfish and is a very destructive government. It's not good for the country.” 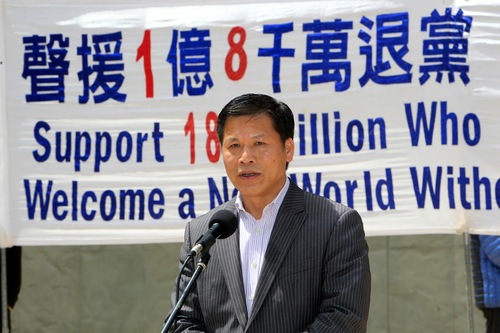 Mr. Ruan Jie, president of the Chinese Democracy Party in Australia and editor-in-chief of the Tiananmen Times, speaks at the rally

Olle Jarlebort, a sales manager from Sweden, said, “I think that everyone should have the right to believe whatever they want to believe and have the freedom to express what they think. If you’re not allowed to speak freely, then there is something sick with the system. I think it’s a good movement.”

Michael Dominick made an effort to join the rally to show his support, “I know about this [persecution] already, and it’s terrible. I try to support it. I read a newspaper on it once and couldn’t believe it. I went home and did some research on the Internet, and it’s all true.”

“I Have Experienced Many Benefits from Practicing Falun Gong”