(Minghui.org) Ms. Liao Huixia, a Falun Gong practitioner from Huan County in Gansu Province, was tried for the second time on June 19, 2014 at Qingcheng County Court and sentenced to four years and six months in prison. Her “crime” was handing out literature to inform the public of the persecution of Falun Gong by the Chinese Communist regime.

Her first trial was held by the same court four months earlier, on February 25. Her lawyer entered a not-guilty plea.

This time, she was represented by a court-appointed lawyer, who notified her family members of the trial only one day ahead of time. Only two of her family members were allowed into the courtroom. Because her husband is already imprisoned for practicing Falun Gong, their 16-year-old son is now forced to live with relatives.

Ms. Liao, 41, was a public servant in Huancheng Township. Her husband, Mr. Kou Ping, was a technician at a mobile services provider in Huan County. Ms. Liao reported having a number of health conditions, including a skin disorder, glaucoma, and chest pains, which disappeared after she began practicing Falun Gong. 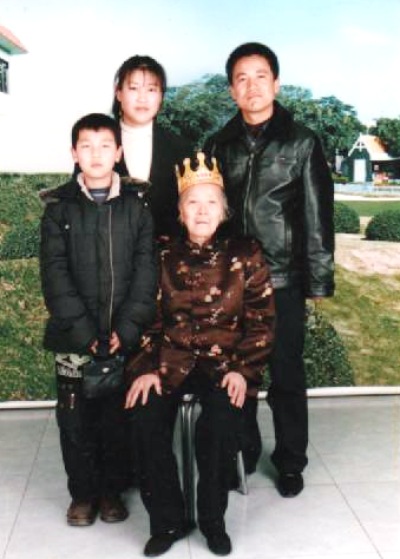 Ms. Liao Huixia with her mother-in-law, her husband, and her son

In the past fifteen years, the couple has been imprisoned multiple times for practicing Falun Gong.

On February 17, 2004, Yang Heping (then-head of the Huan County Public Safety Bureau) and more than ten other officers broke into Ms. Liao's home and illegally arrested the couple. Officers then seized their Falun Gong books, computer, printer, scanner, and other personal belongings, worth over 15,000 yuan in total.

The terrifying incident was too much to bear for Ms. Liao's mother-in-law, who was in her seventies. She fell ill and passed away soon after. Ms. Liao was sent to a forced labor camp for fifteen months. Her husband was sentenced to three years in prison on December 18 of the same year. At the time, their son was only six years old.

Ms. Liao was arrested again at work on August 25, 2011. Officers ransacked her home and seized three computers worth over 17,000 yuan in total. Ms. Liao was taken to Qingcheng Detention Center. Her son was 14 at the time.

To avoid further persecution, Ms. Liao's husband left home. However, he was arrested again on November 15, 2011 and sentenced to four years in prison.

In June 2012, Ms. Liao was unlawfully sentenced to three years in prison with five years' probation.

Her most recent arrest took place on September 22, 2013 while she was distributing literature about Falun Gong and the persecution.

Currently, Ms. Liao is incarcerated in Dashaping Prison in Lanzhou City and her husband in Tianshui Prison in Gansu Province.

“A Shout from Outside the Classroom”