Ten years ago, guards shocked Ms. Gao Rongrong on the face with electric batons for over 7 hours. When they finally stopped, blood and hair stuck to her burned skin, and blisters erupted on her face and neck. This series revisits the horrors of Ms. Gao's case from the perspective of her family members.

Ms. Gao was confined to a heavily guarded hospital ward for almost five months until she was rescued by a group of Falun Gong practitioners, only to be captured again six months later. She died of subsequent torture on June 16, 2005. She was 37.

Ms. Gao Rongrong has become a well known example of the Chinese Communist Party's persecution of Falun Gong, a self-cultivation practice based on the principles of Truthfulness-Compassion-Forbearance. Her only “crime” was persisting in her belief in Falun Gong.

More than nine years have passed since her death, yet the persecution of Falun Gong has not abated. Her two older sisters, now living outside of China, share their family's pain with the public in hopes that more people can see through the Chinese Communist Party's brutality and stand up against the senseless persecution.

In this four-part series, the Gao sisters detail the events that transpired between May 14, 2004, the day they discovered their younger sister's torture, and June 16, 2005, the day their sister passed away.

Rongrong was transferred again on May 18 to the No. 1 Hospital of China Medical University, the No. 2 Orthopedics Department. The guards were nervous and did not want anyone to see her. However, since she was so frail by this time, and since some medical personnel had to be present during the transfer, the guards finally called for an ambulance.

Rongrong's face was covered with burns from the devastating electric baton torture. She also had broken bones from a failed escape attempt.

During the hospital registration process, many people gathered around to see her. They were visibly shocked, and we stopped many times to tell them about what happened. We said, “The Tiananmen self-immolation incident was fabricated, but my sister being disfigured is real.” The guards could not look anyone in the eye at this point.

Mysterious Man Turns Out to Be Justice Bureau Director

Weiwei stayed with Rongrong on the first night at the No. 1 Hospital. Guards woke them up early the next morning with their shouting and cursing. That day, Lili went to the hospital and stayed there.

Lili saw two people dressed in black standing beside Rongrong's bed. One was male and the other was female. Both were very tall.

The man had a long face and had his hair combed back. He wore a black short sleeve shirt tucked in black suit pants, with a wide black belt. A pair of rimless black shades covered most of his face. He bent over and was examining the burns on Rongrong's face. The woman was also dressed in black, and had a low ponytail and a pair of dark shades. She carried a paper file folder under her arm.

When Lili looked up to ask who they were, they turned around and left.

Lili then looked at Rongrong. She opened her eyes slightly and looked at Lili. Lili asked, “Did you see them?” Rongrong nodded. “Do you know who they are?” Rongrong said softly, “No.”

We had a strange feeling after they left, but we saw them again around 10 o'clock that morning in the hallway. They were looking into Rongrong's room through the glass panels on the door. They stayed through the morning.

We started an appeal with relevant departments at the Shenyang Bureau of Justice and tried to file complaints against the camp guards for what they did to Rongrong.

Officials at the Longshan Forced Labor Camp claimed that the burns on Rongrong's face were caused by the fall. We questioned Management Section Chief Wang Xuetao about why they lied, but he only said that the report to the Bureau of Justice had stated it that way. When we asked who wrote the report, he responded that it was a joint effort by the team leaders.

We went to the Bureau of Justice many times. Each time, Department Director Liu Bo met with us. He just listened without interruption or comment until we asked that the culprits be brought to justice. He denied that Rongrong's disfigurement was caused by electric batons or any foul play at all.

We insisted on meeting with the bureau director, and Liu Bo finally gave in and took us to an upstairs office in the main building. Liu Bo introduced a man there as the director of the Bureau of Justice. We told the director about what had happened to our sister and told him that she was still being monitored by the camp guards at the hospital.

The director avoided responding to our concerns. When we asked him about how the bureau handled my sister's case, he said it was still under investigation. At this point we were upset—the entire public security system, from top to bottom, had worked in collusion to conceal torture and mistreatment of so many Falun Gong practitioners.

Lili then realized he was the same man who had spied on Rongrong at the hospital. He sent us out of his office when she identified him.

We found out later that his name is Zhang Xiansheng of the Shenyang City Bureau of Justice. He had seen Rongrong at the hospital, yet he pretended to know nothing about her.

Several days after Rongrong was taken to the No. 1 Hospital of China Medical University, Wang Xuetao (王学涛), an official from the Longshan Forced Labor Camp, sought to confine Rongrong there longer.

Every time she was taken out for a physical checkup, the guards appeared to be very nervous. They had good reason, since wherever Rongrong went, other patients and their family members would ask all kinds of questions about her scorched face, and we would tell them about her being tortured.

The guards always stopped us and threatened us, saying that they were going to call 110 (phone number for reporting to the police) on us. One time in an elevator, when some people asked about Rongrong's face, Bi Hongyin (毕印红), an officer from the Management Department of the Longshan Forced Labor Camp, waved his fist around and threatened Ms. Gao Weiwei. 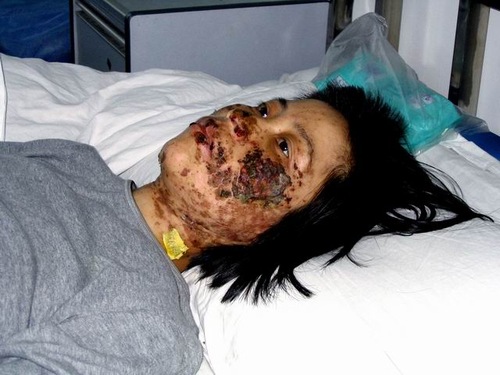 Ms. Gao Rongrong, photo taken on May 7, 2004, 10 days after her face was shocked by electric batons.

Sometimes, when trying to disperse the onlookers, the officials would get mad and shout at people. Liang Zhen (梁真), deputy commander of Group 2 from the Longshan Forced Labor Camp, once yelled, “Yes, we shocked her—we did!” Two other officers, Su Zhizhong (苏志忠) and Wang Chunmei (王春梅), also yelled down the corridor: “Yes, we shocked her. So what? We should have shocked her to death!”

Guards from the Longshan Forced Labor Camp took turns watching Rongrong. They worked 24-hour shifts, and sometimes four officers stayed on duty. Sometimes, three of them would keep a close watch on the ward, monitoring all of us, and they would prevent people from visiting Rongrong.

Guards never left Rongrong's ward. During this time, several of them, including Wang Chunmei (王春梅), Su Zhizhong (苏志忠), Ma Zaiming (马再明) and Liang Zhen (梁真), went to great lengths to harass Rongrong. Other guards took detailed notes of Rongrong's condition and her every interaction with others. 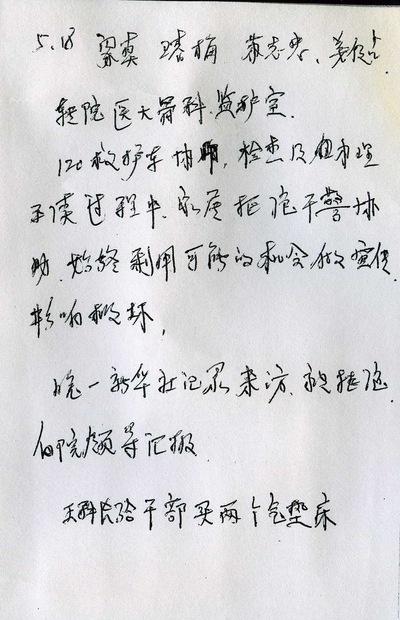 Notes were taken daily by the camp guards who monitored Rongrong.

When Rongrong was first transferred to this hospital, her primary doctor was a young man who seemed like a kind and upright person. When he learned what happened to Rongrong, he referred to her as “Huang Rong” (a fictional television character known for her intelligence and courage). However, this doctor was soon replaced because he refused the demands of officials from the Longshan Forced Labor Camp, the Shenyang City Bureau of Justice, and the Shenyang Political and Legal Affairs Committee.

Never to Be Released—Even in Mortal Danger

Officials from the Shenyang City Judiciary Bureau and the Longshan Forced Labor Camp demanded that Rongrong's surgery be done as soon as possible, so that they could take her back to the labor camp. They talked to the Chinese Communist Party (CCP) Committee of the hospital, who then pressured Rongrong's doctor to initiate her surgery.

Rongrong's left hipbone was fractured, and it required at least 14 days of initial treatment; however, due to the long-term torture, she was very weak. Because she had a fever that the doctors struggled to control, the orthopedic surgeons hesitated to perform surgery on her.

The director of orthopedic department at first showed sympathy for Rongrong, but after he was pressured by the 610 Office and the Shenyang Judiciary Bureau, he started to blame us instead. When he came in to check on Rongrong, he complained that it was my mom who refused Rongrong's surgery. But officials from the Longshan Forced Labor Camp and the Shenyang Judiciary Bureau kept urging him to do Rongrong's surgery.

He soon became furious and shouted at them. “How can I do that if her fever doesn't come down?” he said. “If I do the surgery, she won't recover. Then things would be even worse if new inflammation developed!” Other surgeons agreed with his stance.

As Rongrong's family, we requested that officials from the Longshan Forced Labor Camp and the Shenyang City Judiciary Bureau release her. We wished to take her back home. However, they refused because there were afraid that Rongrong's scorched face would expose their heinous deeds to the public. They eventually decided that they would never release her—even if she died.

The section chief of Shenyang City Judiciary Bureau hinted at their plans to never release her. “Once her surgery is done, we will take her back to the Longshan Forced Labor Camp,” he said. “And we'll give her a separate room for healing.”

They talked to my father about this plan several times. “We will take Rongrong back to Longshan or provide her with special care at the Dabei Prison Hospital,” they kept saying. Through all of it, my father disagreed.