(Minghui.org) Chinatown in Brisbane serves as a gateway to Australia for many visiting Chinese tourists. It is a favorite spot for a familiar meal in between visits to more unfamiliar locales.

When the tour buses arrive in Chinatown, tourists are greeted by the sight of volunteers who welcome them and bring news of the opportunity to quit the Chinese Communist Party (CCP) and its affiliates, an opportunity that is rarely seen in mainland China.

Here we present a few of the stories that volunteers have collected over the many months they've been working in Chinatown. They provide interesting insights into the Chinese populace today. 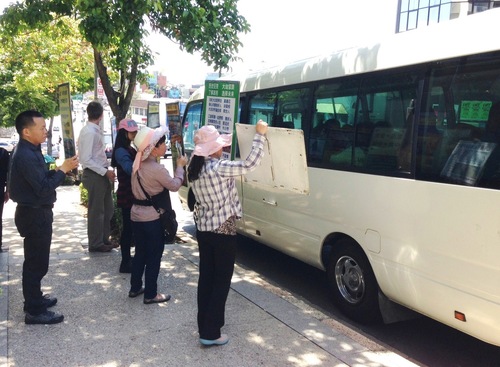 October 1 is National Day in China, a public holiday where workers are allowed a week's vacation. Brisbane's Chinatown becomes crowded with Chinese tourists at this time, and the number who quit the CCP increases as well.

Falun Dafa practitioner Ms. Bai is one of the volunteers at the Quit the CCP Service Center in Chinatown, and has had many experiences with tourists of all personalities.

She once came across a tall young Chinese man. She approached him politely and asked him if he would like to quit the Party.

He coldly replied, “I believe in Buddhism.” What this meant to him is that he wasn't a communist atheist, and because he wasn't an atheist, he could stay a Party member without any repercussion – or so went his logic.

Ms. Bai, however, decided to speak to him from a different angle.

She calmly continued, “Good. There is no conflict here. I also follow Buddhist teachings. Buddhism believes in karma, and that good is rewarded while evil is punished. For instance, those high-ranking CCP officials who are now being punished for their heinous deeds. Surely you know about it. ”

She then went into detail about how the CCP officials who had been involved with persecuting Falun Gong have fallen from grace at the hands of their own Party.

As the young man listened more and more, his posture grew more relaxed. Eventually, when Ms. Bai asked him again if he'd like to quit the Party, his answer became a slight but sure nod.

Another time, Ms. Bai had been volunteering outside of a supermarket in Chinatown when she was approached by a Chinese man.

The man didn't know what to say.

Ms. Bai let him be, and turned to an elderly woman who had been standing aside watching this exchange. The woman had been smiling in response to Ms. Bai's defense, and seemed quite interested in what Ms. Bai had to say.

“Ma'am, you look like a kind person. Would you like to quit the Party? We can use a pseudonym if you'd like,” she said. The woman emphatically agreed.

Ms. Bai then turned to the man again, telling him about how a propaganda machine as big as the CCP's can easily make atrocities invisible. After a while, he eventually agreed to quit the CCP as well.

Hank, a young Falun Dafa practitioner, is part of the effort in Chinatown and the surrounding area to help Chinese people quit the Party.

During his shift recently, Hank noticed a Chinese man who had been scrutinizing his display boards. Naturally, Hank went over and tried to strike up a conversation.

“China's been in a state of unrest these days, political and otherwise,” he began. “Sir, if you've joined any of the CCP's organizations, I strongly recommend you quit in order to keep yourself safe.”

The man tensed up.

“I don't think it has anything to do with me. I've got nothing to be afraid of,” he replied. “The Chinese Communist Party can't be as bad as you guys say. You're just sensationalizing things.”

He then began to walk away, but Hank caught him before he crossed the street.

“Sir please, if you'd just give me one moment of your time, and hear me explain. Please,” said Hank. “

“Why do people need to quit in order to be safe?” he continued. “Because the party has persecuted millions of Chinese people in these past sixty-some years. These atrocities won't go unpunished, and if you don't quit, when the Party falls, you'll go down with it.”

“Have you joined any organizations affiliated with the party?” asked Hank.

“I used to be a Young Pioneer,” confessed the man.

“So you once vowed to serve the Party with your life,” said Hank. “That vow won't just go away, unless you explicitly renounce it.”

“I mean, take a look at Bo Xilai, Wang Lijun and Zhou Yongkang. They used to be such powerful Party members, and look at them now! They're in jail for not just corruption, but harvesting organs from living Falun Gong practitioners. A Party that allows such evil people to run rampant for so long can't possibly be good. Sir, you're a good man, and I'd hate to see you associated with them.”

After that, the man immediately told Hank that he wanted to quit both the Young Pioneers and the Youth League.

Being a Westerner who doesn't speak the language, people may wonder why practitioner and entrepreneur Ben Smith would donate his precious time to volunteer work holding banners and manning display boards in Chinatown. 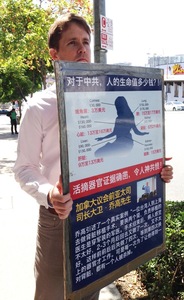 As a long-time practitioner of Falun Dafa, he's come to lead a happier and healthier life because of this spiritual practice, and seeing Falun Dafa banned in its home country due to the CCP's treachery made him extremely upset.

He felt the urge to raise awareness about this situation to the Chinese people so that they won't continue to be deceived by the CCP's lies and attack a practice that's brought so many benefits to Chinese society before the CCP's persecution.

“Chinese people have been deeply poisoned by the CCP's lies and propaganda, and I want to help by sharing the truth with them here in Chinatown,” says Mr. Smith.

“I would like them to know that not only Chinese people practice Falun Dafa, but that it has benefited people of all races from all corners of the world. I hope that they can learn more about Falun Gong and the truth of the persecution in China, and no longer be deceived. ”