After Reciting “Falun Dafa Is Good,” My Son's Vision Returned to Normal

(Minghui.org) I am writing this article to tell everyone that Falun Dafa is indeed supernatural, and defies modern science. I would also like to advise fellow practitioners to always use the Fa to understand things and deal with things, and truly believe in Master and the Fa.

My nine-year-old son's nickname is Honghong. When he was four, we noticed that he always looked at things with his head tilted. We took him to Sichuan University's Huaxi Hospital, where he was diagnosed with amblyopia and strabismus. He had to wear glasses, and undergo various treatments and eye training sessions. But any improvement was not obvious.

Doctors at Huaxi Hospital examined him again in January 2012, and discovered that the amblyopia and strabismus had turned into nearsightedness and astigmatism, and prescribed glasses to correct his nearsightedness. We didn't worry about him much, since glasses can correct nearsightedness. However, he was still looking at things with his head tilted. We knew it was probably due to strabismus, but we could not find a way to correct that. 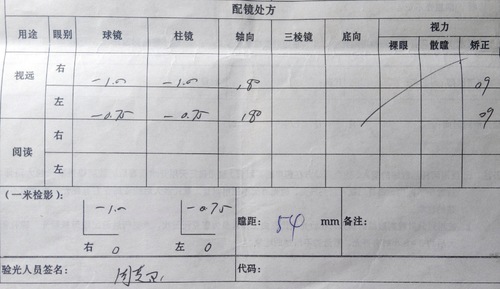 My son's glasses prescription for nearsightedness

Three months after he got this pair of glasses, Honghong told me that he couldn't read the blackboard even when he was sitting in the first row. His teacher called me and told me that Honghong often didn't pay attention in class. I thought, “Well of course not, because he can't see the blackboard.”

So we took him again to the hospital around May 2012. We were shocked when the doctor told me, “Your child can only see up to 0.8. It is the same if we give him -2.00 lens or -3.00 lens. We need to test him more thoroughly.” Below are the photos that were taken for the eye OCT test results. 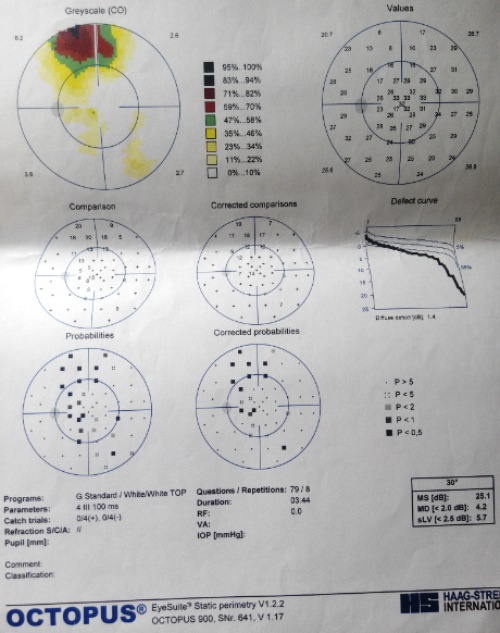 The doctors eventually concluded that my son had developmental glaucoma. The surface of the retina of his eyes had a damaged spot where the eyes would normally focus, that was possibly caused by excessive exposure to bright light. Therefore his eyes could only focus when he looked at things with his head tilted. 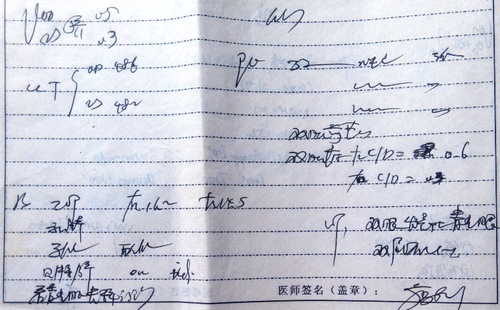 I was planning on eye surgery for him, and took him to an eye specialist hospital in Chengdu City in July 2013. He still could not see better than 0.8 even with -8.00 lenses. I told the doctor there what the doctors at Huaxi Hospital had said. The doctor said, “His situation is very complicated. We need to discuss and study it with several specialists. But we can't guarantee the final outcome.”

At that time, my son's classmate's mom told me about an eye doctor who used acupuncture to treat nearsightedness with very good results. Because we were worried that the surgery might leave my son with complications, we decided to put off the surgery and try acupuncture first.

Because my son's case was so complicated, I didn't tell the acupuncture doctor the details. Instead, I indirectly asked him if a child has a damaged area as a result of a excessive bright light, whether that could be cured. He told me that this condition could not be treated with his current techniques. But I didn't want to accept that. Also, normally they would only give treatments if the eyes are better than -3.00. But they saw that I was very sincere and I promised that I wouldn't fault them if the treatment didn't work on my son, so they agreed to take him. I didn't dare to mention the real situation with my son's eyes.

Each round of treatment took two weeks. We did total of 15 rounds, with some breaks in between, which altogether took almost a year. Every morning we had to get up at 6:30 to go for the treatment. We ate breakfast on our way there. My son's vision improved to between 0.5 and 0.6 and then stopped improving. And if we stopped the treatment for two weeks, he went back to looking at things with his head tilted and eyes narrowed.

After about a year, my husband said to me, “One can avoid tragedies and have good fortune by sincerely reciting 'Falun Dafa is good, Truthfulness-Compassion-Forbearance is good.' Why don't we stop the treatment and just leave our child in Master's hands? Why can't we just believe in Master and the Fa on this matter? Master told us in Zhuan Falun,

“We have said that good or evil comes from a person’s spontaneous thought, and the thought at that moment can bring about different consequences.”

But my human notion was quite strong, and I couldn't get over my attachment. So after stopping for a month, I again took my son for another two rounds of treatments. But his vision no longer improved. This time, after thinking about it again and again, I decided to stop taking him to the hospital. Instead, we encouraged him to recite “Falun Dafa is good, Truthfulness-Compassion-Forbearance is good,” every day.

After three months, his vision gradually returned to normal! I must mention that after his recovery, since the time he was in second grade, he has been participating in many extracurricular lessons, including Olympic math, Chinese, English, violin, and calligraphy, so he has used his eyes a lot. In the past, as soon as we paused the treatment, his vision declined. But this time, his vision got better. He told me one day, “I can now read the blackboard from anywhere in the classroom, and I can see very clearly the small hand-written characters on the board that I couldn't see before.”

Honghong began wearing glasses when he was four, but he is now nine. He no longer needs glasses, and no longer tilts his head. This year several more kids in his class got glasses. Their parents asked me how Honghong's eyesight was cured.

I proudly told them, “It was simply by reciting 'Falun Dafa is good, Truthfulness-Compassion-Forbearance is good.' Falun Dafa cured my son's vision.” “Just by reciting these few characters!?” They couldn't believe it.

Some of them knew Honghong's past situation, and were aware of all the treatments we had tried, so they had to believe it. From their expressions, including those who didn't previously agree with Falun Dafa, I could tell that they were truly impressed with Falun Dafa's power.

Thank you, Falun Dafa! Thank you, great and compassionate Master!

“I Was Persecuted and My Family Destroyed”