Chinese in San Francisco: Something in Falun Gong Touched My Heart (Photos)

The Bay Area has been one of the Chinese Communist Party's (CCP) major overseas targets to extend its propaganda and stir up hatred towards Falun Gong.

Some Chinese people were deceived by the CCP's slander or enticed by its financial incentives, and developed negative attitudes towards Falun Gong. However, due to Falun Gong practitioners' peaceful resistance and truth-clarification efforts, many local Chinese people have become supportive.

At two Falun Gong marches held on Wednesday—one in downtown and the other in the Civic Center area—practitioners helped many Chinese people quit the CCP and witnessed some touching stories. 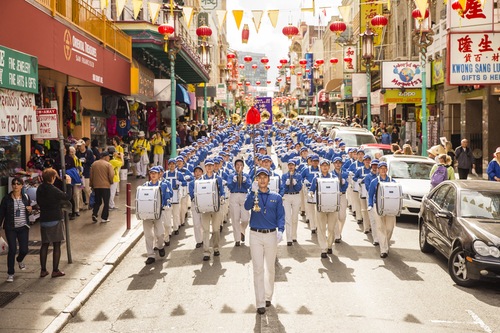 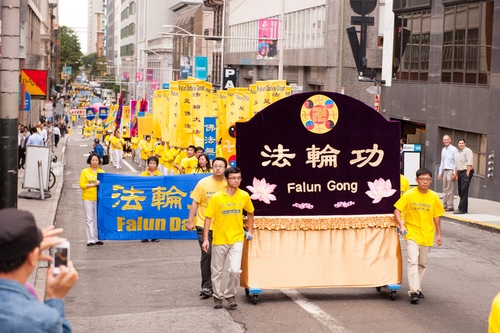 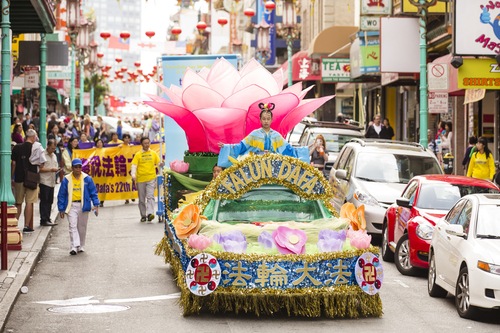 Scenes from the Marches

A CCP agent wants to quit the party

One major goal was to tell the public about quitting the CCP and help Chinese people who wish to do so.

When the march went through Chinatown, a 40-some-year old Chinese man quietly watched for a long time. After a long conversation with a practitioner, he revealed his identify—a CCP special agent, whose job is to spy on and interfere with Falun Gong in America.

He said that through his work he knew very well how evil the party is, and Falun Gong is actually wonderful. He was happy to have a chance to talk to a Falun Gong practitioner face to face, and quit the party with a pseudonym.

Chinatown store owner: “I will be very happy if the CCP falls one day.”

Mr. Cai, who runs a grocery store, condemned the persecution of Falun Gong while in tears. “It is so inhuman, especially the organ harvesting,” he said, “The CCP is afraid of people who have spiritual beliefs, so it not only persecutes Falun Gong, but also other religious groups.” Mr. Cai quit the Communist Youth League.

Mr. Liang and his wife watched the march from outside of their grocery store, and quit the party. Mr. Liang said: “I will be very happy if the party falls one day. It is so corrupt and shamelessly robs people.”

A lady standing by Mr. Liang echoed: “What I heard about Falun Gong from the CCP is different from what I see today. So many people practice Falun Gong. They all look so peaceful. We just cannot trust the party.” She also quit the Communist Youth League.

Ms. Yang, a Falun Gong practitioner from New York, often goes to tourist spots in New York, helping the Chinese people there quit the party. She was happy to do the same in San Francisco. Ms. Yang told one Chinese family about the organ harvesting.

She said to the father: “I will feel guilty if I don't tell you all these things. This is an evil party, and Heaven will punish it in the near future. I don't want you to be a part of it. Quitting it will bring you a bright future. That is why millions of Chinese people have abandoned it.” The whole family was touched by Ms. Yang's goodwill and quit the party.

“You are righteous. We all know it.”

Mr. Niu watched the march with great interest. He said to a practitioner: “Although I cannot live up to the principle of forbearance, I believe that the principles of truthfulness and compassion are the best for society. The CCP lacks such principle. That is why it persecutes Falun Gong.”

Mr. Lu, a local businessman, knew about Falun Gong and the persecution. He watched the exercise demonstration with one of his western colleagues. He kept telling his friends what he knew about the persecution and organ harvesting.

Mr. Zhu, the owner of a store in Chinatown, has seen Falun Gong's march every year. “The persecution is too brutal, and you have suffered too much,” Mr. Zhu said, “But you are righteous. Your actions are righteous. We all know that in our hearts, although sometimes I don't say it.”

Chinese newcomer: “Something in Falun Gong touches my heart”

The marches offered many tourists and newcomers a chance to witness the beauty of Falun Gong for the first time.

One young Chinese student, who has an internship at a bank in downtown, was excited to see the march and took a lot of pictures. “I've never seen a Falun Gong march before. It is so impressive. I heard about Falun Gong a little bit when I was in China, and it was all negative. Today, I got to see the real Falun Gong. Obviously, the CCP has made up a lot of lies.”

A group of young Chinese tourists shared the same feeling. They were curious about the photos of practitioners decorated with wreaths in the march, and asked what those were about. When they learned that those practitioners were tortured to death during the persecution, they became silent and sighed.

Mr. Chen, a Chinese student who had just come to the Bay Area not long ago, was amazed. “It is so different than what I had heard in China,” he asked Ms. Dong, a practitioner, “How can I help inform my friends in China?”

Ms. Dong gave him a flyer, which has information about tools to break through the Internet blockade in China. Mr. Chen was excited: “I will definitely give them this, so that more people will learn the truth about Falun Gong, and maybe more will start practicing Falun Gong.”

The Minghui correspondent ran into a young Chinese couple in front of city hall, who were vacationing in the U.S.

They were impressed by the march. “They are even protected by the police,” the husband marveled, “They enjoy freedom of belief here. It's impossible in China. Information is blocked.”

The wife said that in the last month, they have been to Washington D.C., New York City, and Hong Kong, and have seen Falun Gong practitioners' activities at the famous tourist spots.

“We have already quit the party at one of your events in Washington D.C.,” the wife happily told the reporter.

Ms. Hai had recently come to the U.S., and was watching the march with a friend.

“It is so beautiful. I love the band's performances. I even cried,” she said, “I don't know why. I am not sure where my tears came from. It seems that something in Falun Gong touched my heart, something blew me away.”