A Second Chance at Life

(Minghui.org) Good health makes for a happy life, but is it possible to recover either of these after they've been lost? For Liu Shujin, a retired schoolteacher in Taiwan, this dream was made possible through practicing Falun Dafa. Now, having benefited so much from the practice, she wishes to share her experience with others. 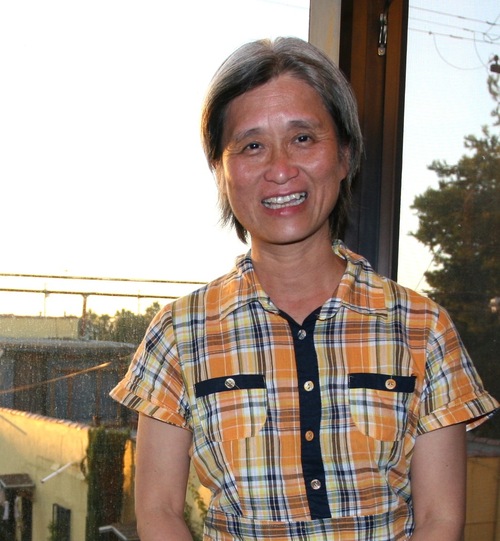 A conscientious teacher, Ms. Liu worked hard to be the best for her students, but she also made time for play; she enjoys traveling and fine dining, has visited many countries and sampled many different cuisines. Hers seemed the perfect life.

However, when she was in her forties, Ms. Liu's health suddenly and unexpectedly deteriorated. The once-energetic teacher now had to rest over eighteen hours a day. In class, she had to use a microphone to project her weak voice – and that was on a good day. On a bad day, she had to leave the classroom to lie down because of severe dizzy spells.

At a loss, Ms. Liu underwent various medical exams, and sought remedies from both Western and Chinese medicine. But nothing seemed to be able to rid her of her inexplicable frailty – not even the 1,000 TWD she spent every week on herbal supplements.

Practically overnight, Ms. Liu lost her good health. She constantly felt lethargic and left behind, and could no longer keep up with the fast pace of life.

One morning, Ms. Liu took a stroll in a park close to her home and saw a group of people meditating, with soothing music in the background. Out of curiosity, she approached them and asked what they were doing.

After one of the participants introduced Falun Dafa to her, Ms. Liu said, “I would like to learn this practice.”

She borrowed the book Zhuan Falun from the practitioners and read it through quickly.

Ms. Liu said, “I felt strongly that my body was connected to the universe [when I read]. Words cannot describe what a comfortable feeling that was.”

Ms. Liu took up Falun Dafa because she thought the exercises and Dafa's principles of Truthfulness-Compassion-Forbearance were great – not because she wanted to cure her illness.

However, after a month of practicing Falun Dafa, her health greatly improved. She went from resting for most of the day to getting up at 5:30 a.m. every morning. She could work the whole day, with energy to spare.

One day, her classroom microphone stopped working and Ms. Liu realized that she could now speak as loudly as she used to, her voice projecting throughout the classroom.

Following the principles of Truthfulness-Compassion-Forbearance in her everyday life has also helped Ms. Liu become a better person. She is now less stressed and is a lot more content with what she has.

It has been more than 10 years since Ms. Liu started practicing Falun Dafa, and she has stayed healthy and happy ever since.

Energetic, happy, humorous and caring – Ms. Liu is a spot of sunshine among her many friends. And she never hesitates to share the benefits of Falun Dafa with everyone.

Even though her colleagues used to be influenced by the Chinese Communist Party's (CCP) slander against Falun Dafa, they completely changed their opinion after Ms. Liu introduced Falun Dafa at her school.

Ms. Liu also spreads the word about Falun Dafa when she travels, even to people she meets in other countries. During a trip to Nepal, she introduced Falun Dafa to a local travel agency, and many employees there took up the practice. They put Falun Dafa introductory materials and the travel agency's business cards in the surrounding hotels, and if anyone became interested, the agency would contact Ms. Liu.

While taking a tour of a university in Nepal, Ms. Liu told her tour guide that she would like to introduce Falun Dafa at the university. Arrangements were made for her to speak to the university president, and the president liked Ms. Liu's idea very much.

The president gathered the faculty and staff the next day, and Ms. Liu taught all of them the Falun Dafa exercises. Some spectators, including several local monks, also joined in.

After she retired from teaching, Ms. Liu set up a Falun Dafa information booth near a restaurant in Yilan City. Many tourists from mainland China learned about Falun Dafa through Ms. Liu and her fellow practitioners. As more and more Chinese people learned the true story of Falun Dafa, they became friendlier and more relaxed when talking to Dafa practitioners.

Over the past 10 years, many people have taken up Falun Dafa cultivation practice through the efforts of Ms. Liu – a fact that Ms. Liu is happy to admit. After all, when a simple spiritual practice has given her so much, she says, introducing it to others is the least she can do.