(Minghui.org) Guards in the Number 2 Detention Center in Hegang City, Heilongjiang Province, tortured 53 female Falun Gong practitioners in April 2002 using a device called the "iron bar." The torture was directed by Zhang Chunqing, vice head of Hegang Police Station, and Li Shulin, head of the detention center. The practitioners could not stand or sit. They were deprived of sleep and not allowed to go to the restroom. 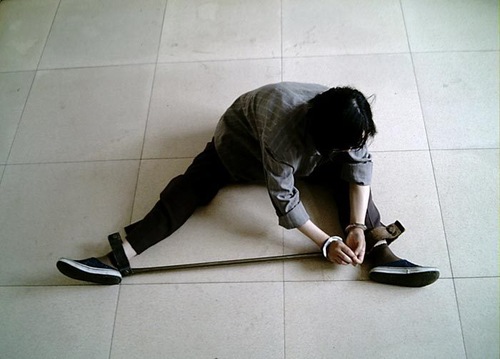 Around 500 Falun Gong practitioners in Hegang were arrested at the end of April 2002. Under the direction of Hegang City Communist Party secretary Zhang Xingfu, police from the police station and substations and special agents from State Security Bureau participated in the arrests for seven days. Nearly 100 practitioners were taken to forced labor camps or imprisoned.

53 Women Tortured with the Iron Bar

The detention center was overcrowded, with around 50 people in each cell. Many had to sleep on the brick floor. One day, someone in practitioner Ms. Zhao Shuxiang's cell shouted, “Falun Dafa is good” after hearing a practitioner in a neighboring cell being beaten. A guard entered and asked who shouted. No body responded. The guard called practitioners Ms. Zhao Shuxiang, Ms. Wang Xiuqin, and Ms. Zhang Chunzhi out and handcuffed them.

He took a one-meter-long iron bar with a ring at each end and placed Ms. Zhao's feet into the rings, one at each end. Then he cuffed both hands to one foot, so that her legs and the bar formed a triangle; her back, one leg, and hands formed a triangle, too. She could not move. Gradually she became numb and eventually lost all sensation. She was deprived of sleep. Cold water was poured over her when she fell asleep.

One day the guards called all the inmates from one cell to stand outside. Ms. Zhao was carried out in front of them. The leader said whoever continued to practice Falun Gong would be restrained like Ms. Zhao to the iron bar. Twenty-seven practitioners said they would continue practicing their belief, and all of them were tortured with the iron bar.

Guard Wu Yanfei saw someone with closed eyes in cell 13 and cursed her. Some practitioners shouted “Falun Dafa is good!” The guard then tortured 25 practitioners in that cell with the iron bar. Other guards helped.

The iron bars range from 1 to 1.6 meters long. Practitioners Ms. Jiang Yueqiu, Ms. Chen Yanmei, and Ms. Geng Guihua were tortured with the 1.6-meter-long bar, similar to their height. It is generally hard to endure two hours with both legs spread apart by the bar, but the torture for most of the practitioners lasted over two weeks.

Among the 53 practitioners, there were both elderly and young women. Two of them were even shackled in addition to the iron bar. Officer Wang Cai with the Xinyi Police Substation tortured practitioner Ms. Ding Fenglian and then carried her to the detention center. Her shackles weighed more than 40 pounds. The center tortured her again with the iron bar without removing the shackles.

All the police and officials, including Li Shulin, You Jie, Wu Yanfei, Zhang Chunqing and Zhang Xingfu, have participated in carrying out this torture.

Ms. Chen Mingzhen Beaten while Restrained on the Iron Bar

Ms. Chen Mingzhen from Xingantai was one of the 53 practitioners tortured with iron bar. She was deprived of sleep for many days. Because of the torture, she began talking nonsense, and guard You Jie beat her with hard rubber tubing 29 times. Her back was all bruises.

Her buttocks began to fester after over 20 days of torture with the iron bar. A doctor who saw her condition had tears in his eyes when he treated her. The doctor asked the center to remove her from the bar again and again. Ms. Chen became delirious for days. She had two big depressions on her buttocks after the wounds finally healed at the end of June.

Ms. Chen survived the torture and returned home, but was then murdered. She received a call, went out, and never came back. She was carried to a hotel in Xingantai after being murdered. The culprit is still at large because the victim is a Falun Gong practitioner.

Ms. Zheng Hongli from Yichun was forced to sit on the ground day and night attached to the iron bar. Her buttocks festered as a result, and her bones were visible by day nine. Only after her wounds began to smell bad was she removed from the bar.

Ms. Wu Meiyan's bones were also visible due to festering as a result of the iron bar torture. She was later imprisoned in Heilongjiang Women's Prison. The iron bar torture harmed her health, and she passed away not long after being released.

The iron bar torture and sleep deprivation left practitioners in agony. The guards also instigated criminal inmates to beat the practitioners and pour cold water on them to keep them awake.

Ms. Zhang Yingchun was tortured for 7 days with the iron bar, Ms. Chen Yanmei, Ms. Geng Guihua, Ms. Jiang Yueqiu, and Ms. Zhao Shuxiang for 17 days. Ms. Zhao was virtually paralyzed after she was removed from the bar. Several inmates were moved to tears and helped the practitioners get water to clean their faces and walk around.

Once the iron bar is removed, one feels lightheaded, weak in the legs, and cannot stand or walk for a long time.

“Master Did Not Give Up on Me”