What Is China's Constitution Worth? - Comments on the Illegal Persecution of Falun Gong in China

(Minghui.org) It's now been over 14 years since the communist regime started the persecution of Falun Gong. The persecution reports published on the Minghui website are truly disturbing. However, because of the information blockade coupled with the regime's overwhelming propaganda, some people remain confused and haven't realized the depth of the brutality and that the persecution itself is totally illegal.

I recently saw a photo on the Internet that ridiculed China's Constitution as being worth only 8 yuan per 500 grams. The fact that regime officials haven't obeyed their own laws in persecution of Falun Gong suggests that the constitution is little more than than a tool they bend to their will to do evil. It's become a weapon regime officials use to persecute innocent people. 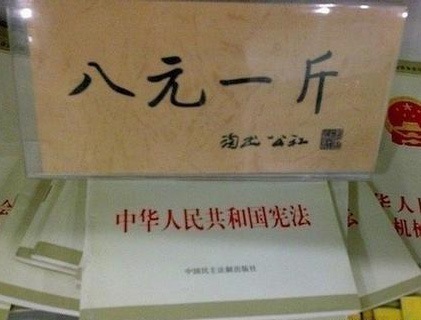 The judge's statement is a typical example of the attitude officials who work for the communist regime have. In another instance the deputy secretary of the Political and Legal Affairs Committee in Xichang, Sichuan Province, said to an attorney defending practitioners, “Don't talk about laws to me, we don't follow the laws.”

When questioned by practitioners' family members, Feng Xiaolin, presiding judge in Qian'an Court in Hebei Province, confided that they didn't follow the laws in a Falun Gong practitioner's case.

Ma, head of Nong'an County 610 Office in Jilin Province, said, “We make the decisions here. We only talk about politics, not the law. You can sue me anywhere you want.”

The communist regime never follows the laws when it comes to Falun Gong.

According to its own Constitution, Chinese citizens have freedom of religion and speech. However, when Jiang Zemin, the former communist leader, abused his power and personally launched the persecution of Falun Gong on July 20, 1999, China's Constitution became just a piece of paper, and overnight millions of citizens were deprived of their freedom and right to practice Falun Gong.

When interviewed by a reporter from Le Figaro in France on October 25, 1999, Jiang Zemin violated the Constitution by referring to Falun Gong as a “cult.” Following Jiang's statement, The People's Daily immediately ran a special unsigned editorial piece, also calling Falun Gong a “cult.”

However, Jiang's interview wasn't the law, and the unsigned editorial in The People's Daily wasn't the law, either. In order to establish a "legal basis" for persecuting Falun Gong, Jiang forced the People's Congress to pass a "law against evil religions" on October 30, 1999, which was filled with unclear terms and vague definitions. Furthermore, this law didn't mention Falun Gong.

Falun Gong is an ancient self-cultivation practice, based the principles of Truthfulness-Compassion-Forbearance. It was widely recognized in China before the persecution for effectively improving people's health and morality.

In 2000, the Ministry of Public Security published an announcement (Document [2000] No. 39) listing 14 cult organizations, but Falun Gong was not on the list.

Some would say that the communist regime, whose power is based on lies and tyranny, is the real cult. In the persecution of Falun Gong, Jiang Zemin has placed his personal will above the law.

There was a monument on view at Northwest University of Politics and Law in Xi'an, Shaanxi Province, (see photo below) that implied that China's Constitution was useless. Because of the ironic implication, it was later taken down. 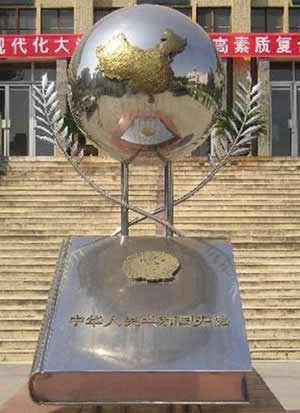 Monument at Northwest University of Politics and Law in Xi'an, Shaanxi Province, implied China's Constitution was useless (Photo from the Internet)

According to the law in China, it has never been a violation of any law to practice Falun Gong. There has never been any real “legal basis” for the persecution. Regime officials themselves don't follow laws, only politics, which exactly what the monument above implied: “China's Constitution is useless.”

At the beginning of the persecution, the regime detained hundreds of thousands of Falun Gong practitioners in labor camps. Using forced laborers itself is already illegal, and the sentencing process is even more ridiculous because everything is handled by the police. Police officers not only arrest practitioners, but also determine the results of the trials on behalf of the legal authorities. Without having had the benefit of any real legal process, a practitioner can be sentenced to three years. The police can even extend the sentences at their own discretion.

In recent years, the international community began to condemn the labor camp system in China. To deceive the outside world and continue the persecution, the Chinese courts began to sentence Falun Gong to extremely long terms. The trials themselves are just for show.

The brutal persecution of Falun Gong by the communist party not only undermines the enforcement of law in China, but is also destroying human morality. China may well be teetering on the brink of an unprecedented disaster.