(Minghui.org) Over 1,000 Falun Gong practitioners and supporters gathered in front of Metro Hall in Toronto, Canada on August 26, 2013 for a rally and march to raise awareness of atrocities happening today in China. A number of elected officials attended the event, while others offered letters of support. They spoke out against the abuses of the Chinese Communist Party (CCP), with particular emphasis on ending forced organ harvesting, a crime against humanity. 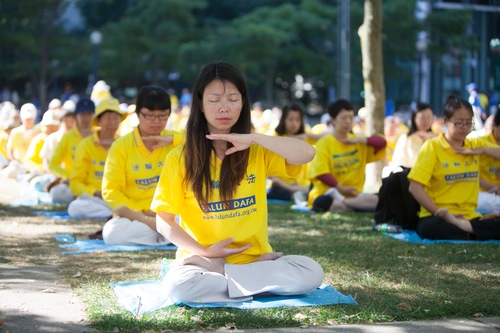 Practicing the Falun Gong exercises before the rally 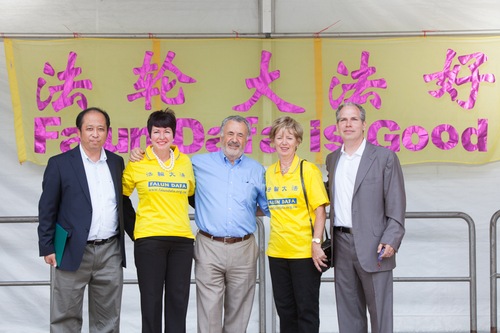 Former Senator: “We will be there with you as long as it takes to win the battle!” 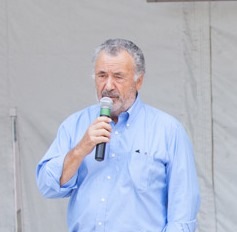 Former Canadian Senator, Chairman of the Parliarmentary Friends of Falun Gong, Con Di Nino stated that many parliamentarians in Ottawa and across the provinces support Falun Gong. What the practitioners have been doing is “absolutely a fundamental responsibility of each and every one of us, if we are to be considered as part of the human race. Those who do not support fundamental principles of justice, fundamental principles of freedoms are not of the human race.”

He pointed out, “We have to remind ourselves on a regular basis, that there are too many people in the world that don't have what we take for granted, which is the ability to practice the fundamental rights of religion, of free speech, of being able to express your opinion without being afraid of being put in jail, or worse.”

“We will be there with you as long as it takes to win the battle!” he concluded. 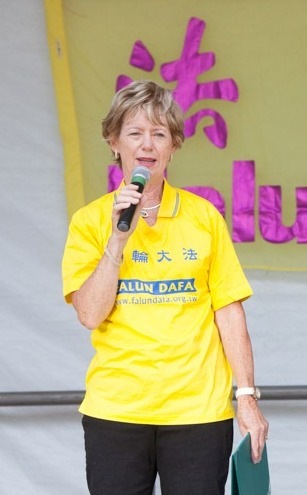 “We must continue the battle together,” said Judy Sgro, Liberal MP, “We have, for some years now, joined forces to demand that China [Chinese Communist Party] stop the organ harvesting, one of the most deplorable practices to happen in China.”

“That's what we need to fight for all around the world,” she said. She stated that the main target of the forced organ harvesting is Falun Gong practitioners, and it is one of the most immediate and pressing issues to be resolved.

MP Sgro called for continued effort to seek help through collecting signatures to end the persecution. She said that the persecution is attempting to destroy truth, compassion, and forbearance, which she feels the whole world needs, and that the world will be far better off if more people followed them. 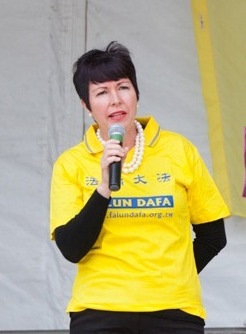 Ontario MPP Jane McKenna stated on behalf of her Party leader Tim Hudak that the rally, “sends a strong message across the country that everyone here today supports peace, compassion and tolerance. We believe in justice and human rights, and we are against the persecution of people based on their beliefs. Here in Ontario, Falun Dafa practitioners have contributed greatly to our community.” 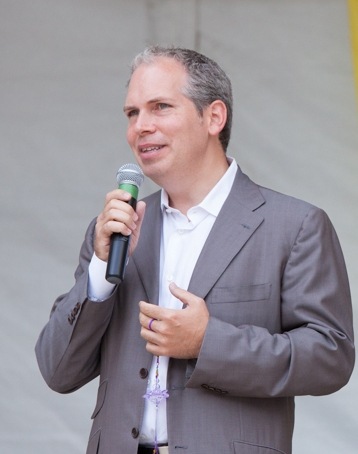 Todd Ross, MP candidate for Toronto Center applauded Falun Gong practitioners for the work they have been doing in the past 14 years to inspire people around the world with their steadfast belief in Falun Dafa. He said, “Falun Dafa is good!”

Mr. Ross said, “I wish that soon we will see the end to this [persecution], and will see people around the world acknowledging that 'Falun Dafa is good.'”

Marie and her husband from Mexico were vacationing in Toronto. They watched practitioners perform the peaceful exercises for a long time. The husband said he felt strong energy there at the event. When they learned that practitioners of this practice have been subjected to forced organ harvesting while they were still alive, they were appalled and signed the petition to call for an end to the brutal persecution.

Julie from Regina, Canada was also impressed by the peaceful scene. She took pictures and listened to a practitioner telling her about Falun Gong and the persecution. She, too, signed the petition and expressed her indignation over the atrocity.

A brother and sister from Shenyang City, China said that some of their neighbors in China are Falun Gong practitioners, but they had no idea why the practice is banned in China. Now after they've traveled overseas, they have learned the true situation. After learning that the “Self-immolation incident in Tiananmen Square” was a hoax that the Chinese regime orchestrated to frame Falun Gong, they were quite upset and said that they would warn other people from China not to be deceived by the regime's lies.

They not only announced their resignation from the CCP and its affiliated organizations, but also signed the petition to call for an end to the persecution of Falun Gong. 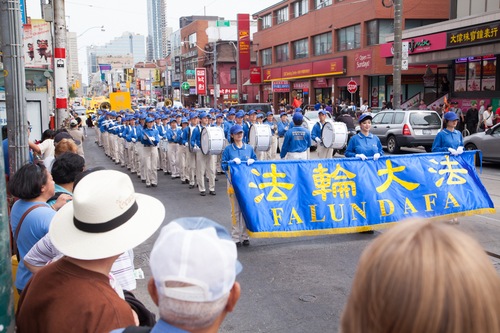 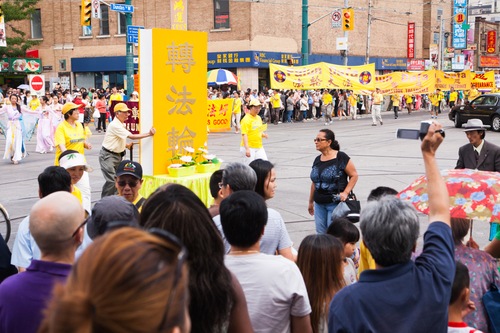 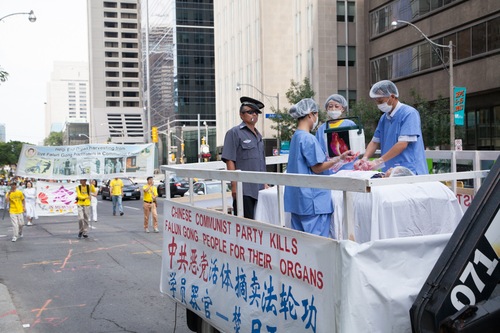 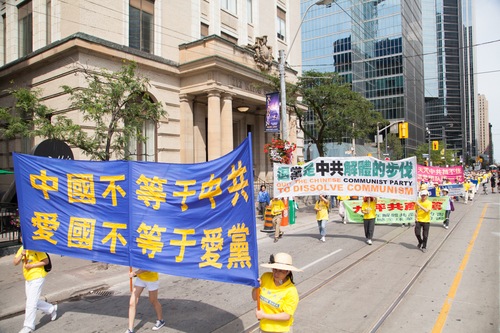 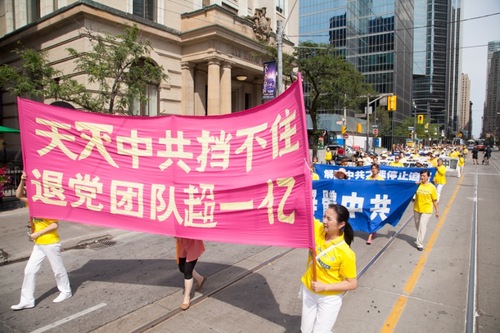 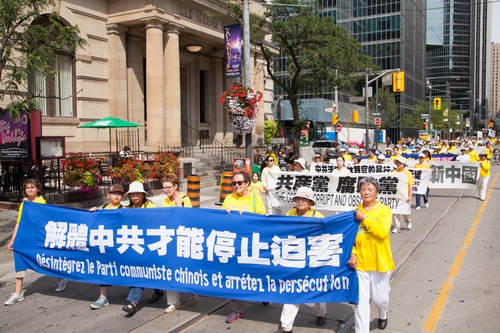 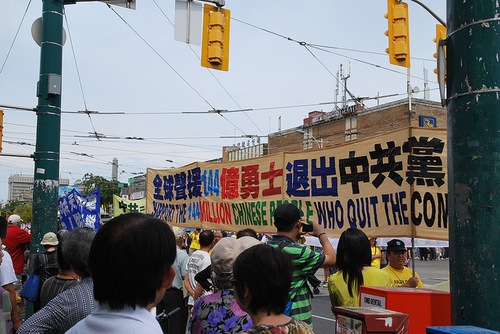 Falun Gong march displays the beauty of the practice with music and costume, as well as the brutality of the persecution in China with banners and torture reenactments

In the afternoon, the vast and impressive procession wended through Toronto's busiest commercial center and Chinatown, attracting attention from numerous spectators lining both sides of the road. Many spectators accepted flyers and signed a petition to stop the persecution.

Ms. Guo immigrated to Canada from Southeast Asia. She and her three daughters came to watch the parade. Her oldest daughter said, “I understand the message on the banners, and am aware that there is a tragic persecution going on in China. I hope this tragedy will stop.”

Mr. Kim is a Korean who immigrated to Canada 13 years ago. He has seen Falun Gong practitioners' parade several times in Toronto, and he supports them for safeguarding their rights.

Mr. Kim learned about the persecution of Falun Gong from online news, and he thought the perpetrators should be punished. He became indignant as he talked about the practitioners having their organs harvested while they are still alive.

“The regime should stop killing. Everyone has the right to belief. They should apologize to Falun Gong practitioners and their families,” Mr. Kim said.

Jenifer and her friends were on vacation in Toronto with their children. She was impressed by the beauty of the parade. When she learned that thousands of Falun Gong practitioners have been killed as a result of the persecution in China, she expressed her sympathy. She asked for a flyer and promised to learn more about the persecution of Falun Gong.

“From a Life of Violence to a Life of Compassion”