(Minghui.org) On July 20, 2013, practitioners from 27 countries across Europe attended the 2013 European Falun Dafa Cultivation Experience Sharing Conference in Copenhagen, Denmark. They also held a series of activities to show the public the beauty of Falun Dafa and to promote the principles of Truthfulness-Compassion-Forbearance.

The practitioners in Copenhagen have been doing the exercises in Kings Park since 1998, rain or shine. When other European practitioners arrived for the experience sharing conference, many went to the park to participate in group exercises, showcase the beauty and peacefulness of Falun Dafa, and to call for an end to the persecution of Falun Gong in China.

Although these practitioners were from different countries and were of different ethnic, cultural, and educational backgrounds, they were united by their appreciation for what Falun Dafa has done in their lives and a deep wish to stop the brutal persecution in China.

Verdnica, a graceful, middle-aged Falun Gong practitioner from Sweden said that she obtained a copy of the book, Falun Gong , “seemingly by chance.” When she encountered some trouble and distress in her life, she carefully read the book. The principles described therein made her realize that this was a profound, mind-body cultivation method. She felt it was very good, and thus she started to practice Falun Dafa.

"My whole outlook on life has changed,” she explained. “It is as if I am a completely different person. The principles of Truthfulness-Compassion-Forbearance are great. I am very happy.

"I came to Copenhagen to participate in several activities to raise awareness about the persecution and to do the exercises with the large group here. The energy field is very good, very peaceful. I hope to bring the beauty of Falun Dafa to the public."

She felt that good people should not be persecuted by the Chinese regime for wanting to practice Falun Gong. "It is such a heavy subject to talk about,” she said with tears in her eyes. “It is difficult to imagine bearing all of this persecution in China."

In Sweden, she often participates in various activities to help expose the Chinese regime's evil nature. She tells her friends, family, and everyday people that she meets about Falun Gong and the persecution.

She was dressed in white, the traditional color for funerals in many Asian countries, ready to take part in a parade wherein practitioners hold photos of fellow practitioners who were persecuted to death by the CCP.

"In the past,” she said, “I gave out fliers and people would often not accept them because they didn't know what they contained. When practitioners are all dressed in white, holding photos of fellow practitioners who were persecuted to death by the Party, people can clearly see what we are doing and quickly understand the cruelty of the persecution. This is a very good approach."

Truthfulness-Compassion-Forbearance offers hope to the world

A young Chinese man named Xiao Lu, personally witnessed the physical changes that his mother had undergone since she started cultivating Dafa, including all of her illnesses disappearing. Since then, he was convinced of the goodness of Falun Gong.

When the Chinese regime began persecuting Falun Gong in July 1999, he was confused by the Party's slander and lies. He thought, “Is Falun Gong good or bad?”

One day, he broke through Party's internet blockade to find out what people outside of China were saying about Falun Gong. When he came across the Minghui website, he was very touched to find that many practitioners were not just persisting in their practice of Falun Dafa, but they were also risking being arrested, beaten, and sent to labor camps for clarifying the truth to the public.

“In 2004, the shell of atheism around me was suddenly broken into little pieces,” he explained. “The truth of the Buddha Fa was revealed. Falun Dafa is so beautiful. At that moment, I felt from the bottom of my heart that I wanted to cultivate! Only Truthfulness-Compassion-Forbearance can offer hope to the world."

From a very young age, Xiao Lu had suffered from hepatitis and a poor immune system. Since he started to cultivate Dafa, he has never needed to go to a hospital. He also improved on a mental level, too. Prior to practicing Falun Dafa, he would often feel saddened by the rampant corruption in his work environment. Now, he is no longer upset by his surroundings.

Instead of following the warped mindset of his superiors, he simplified his thinking and disciplined himself to be a good person. He used to become depressed and was prone to getting headaches from having to deal with people in such a complex work environment. Now, he is relaxed and handles everything in an effortlessness way.

"Although the persecution is not over,” Xiao Lu said, “the evil no longer has the ability to control people on a large scale. People are awakening. When we call people in the mainland to clarify the facts about Falun Dafa, it seems relatively easy for them to accept the truth.

“The attitudes of people in the public security departments have changed, as well. In the past, they were very arrogant and would curse and say, 'Come back to China and see if I don't arrest you!' Now, most of the time, they quietly listen to what we have to say."

Spreading the beauty of Falun Gong 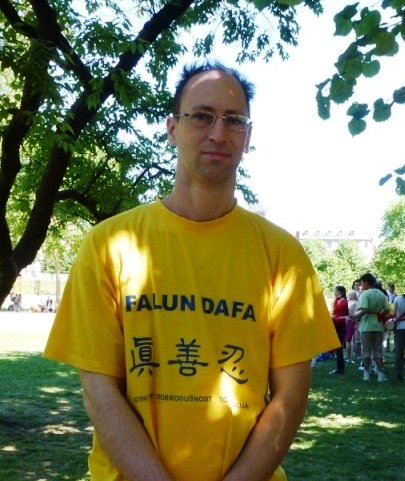 Palacek, a practitioner from Croatia

Palacek, a practitioner from Croatia, has been practicing Dafa since 2003. When he first began reading Zhuan Falun,the main book of Falun Gong, he thought that Truthfulness-Compassion-Forbearance was very good. This was especially so after he learned the five sets of exercises and began to earnestly study the Fa. He said that he had a lot more energy and that his mind had undergone some big changes, too.

"I would like to tell people about the beauty of Falun Gong because I have benefited so much from from practicing it. I came to Denmark to participate in several activities to show people the beauty of Dafa and to call on the public to help stop the CCP's persecution of Falun Gong in China.”

“Wasting No Time At All”