(Minghui.org) After the 2013 European Falun Dafa Cultivation Experience Sharing Conference concluded on July 20, 2013, practitioners from across Europe gathered on Parliament Square in Copenhagen, Denmark, to do the Falun Gong exercises together.

"So many people stopped to watch us," enthused Massimiliano, a practitioner from Italy. "They seemed completely absorbed in what we were doing." He said that he was very moved by the activity. 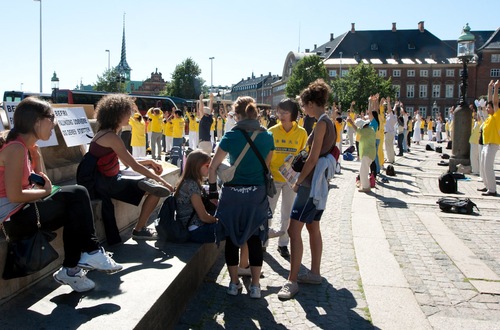 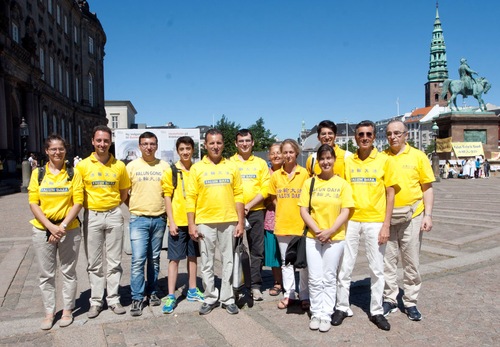 A group of practitioners from Italy

Truthfulness-Compassion-Forbearance is Simple Yet Profound

Massimiliano once attended a public event in his hometown. After he picked up a flier and saw the words, "Truthfulness-Compassion-Forbearance," he thought, "These three words are very simple, yet they have great inner strength."

For most of his life, Massimiliano had been searching for a universal truth that would explain the nature of the universe. As soon as he saw the three words, “Truthfulness, Compassion, and Forbearance,” he said, "This is what I'm looking for! It is the highest criterion with which to measure everything in the universe!" With that realization, he began on the path of cultivation.

Massimiliano said that after he started cultivating he experienced many great changes within himself. "Of course, I don’t want to get into the specifics of how I improved physically, but suffice it to say, I feel full of vigor and vitality.''

Part of the reason Massimiliano attended the 2013 European Experiencing Sharing Conference was to clarify the truth. "I will show people the goodness of Falun Dafa using my own personal experience as an example," he explained.

He said that his greatest wish was for the Chinese people to listen to what practitioners have to say about Falun Dafa and the persecution, and judge for themselves what the practice is all about.

Since Dafa is So Good, We Should Help More People Obtain It

Enrico and his family also attended the 2013 European Experience Sharing Conference in Copenhagen. While doing the group exercises, Enrico felt that the energy field was particularly strong and that the environment was very good. "I feel particularly happy today," he said.

This is Enrico's second time attending an experience sharing conference. "All my family members are very sensitive to spiritual phenomena, and they have all been looking for the answers to life," he explained. After his son started practicing Falun Gong, and everyone witnessed the profound physical and mental changes that he had gone through, his entire family started cultivating in Falun Dafa.

Every member of his family has since become more respectful and caring towards each other.

Enrico felt that the conference was a very important meeting for Falun Gong practitioners. He said, “The environment enabled practitioners to communicate with each other in depth and strengthen their understandings of Dafa. Since we are all cultivators and we all believe in Truthfulness-Compassion-Forbearance, it's easier to exchange experiences with each other about the practice.

"I hope the persecution in China ends soon. It has caused so much suffering and pain to so many people. I feel bad that this atrocity is still going on. I am very committed to ending it as soon as possible."

Enrico said that he hoped that more people in Denmark would come to know about Falun Gong, "Because I have benefited from Dafa, and I believe they would, too."

To Validate the Goodness of Dafa, We Must Walk Our Path Without Fear

"I am so pleased to be able to do the exercises with so many practitioners from Europe," exclaimed Andrea. "The strong energy field here has increased my confidence in the practice."

He felt that his character had greatly improved from being around so many practitioners and sharing cultivation experiences with each other. "What a great feeling it is being here today!" he enthused.

He also hoped that his participation in the experience sharing conference would allow more people to understand the goodness of Dafa and the truth about the persecution, especially the residents of Copenhagen.

Andrea started cultivation practice in 2008. He was initially moved by the three words, “Truthfulness-Compassion-Forbearance.”

"Before practicing Dafa," he said, "I was very lost. I did not know the real goal of life and had no one to guide me. When I saw these three words, although they look very simple, I felt attracted to them, like a magnet. Now, I cannot let them go!"

In the beginning, he was not quite clear about the profound meaning of Truthfulness- Compassion-Forbearance. "Through continuous Fa study, I came to understand that Falun Gong is not simply doing the five gentle exercises. It has deeper meanings, which covers everything in the universe, from particles to molecules.

"Everything I have ever wanted is here in Dafa," he said. He mentioned that he had previously learned some other practice methods, but all they could do was provide him with a few superficial answers about life. However, he said, “Falun Gong has everything!"

"I hope that the Chinese people can let go of their misconceptions about Falun Gong, see Dafa’s goodness, and truly come to know Dafa. I hope the persecution will end soon," Andrea added.

Andrea said that he was concerned for all the practitioners in China who have been unwilling to step forward, due to their attachment of fear. He hopes that they can break through this barrier to validate the goodness of Dafa, as this is the only way we can really move forward, move forward without fear.