Mynttorget Square, close to the Royal Palace, is one of the country's primary tourist destinations. Passersby on the square stopped and read the practitioners' informational display boards exposing the CCP's brutal persecution of Falun Gong in China. Many were shocked and eagerly signed the practitioners' petition, showing their contempt for the Chinese regime's crimes against humanity. 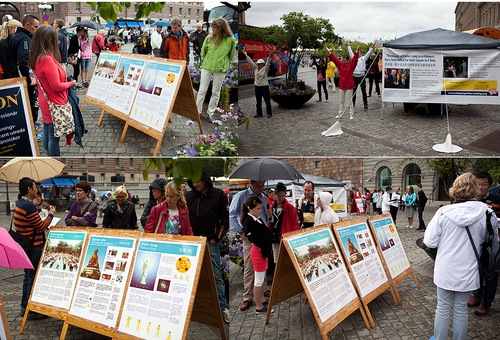 Reading about Falun Gong and the persecution in Mynttorget Square, Stockholm 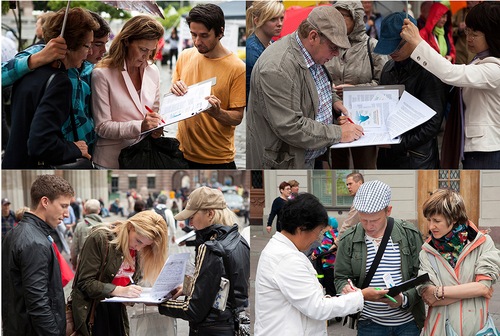 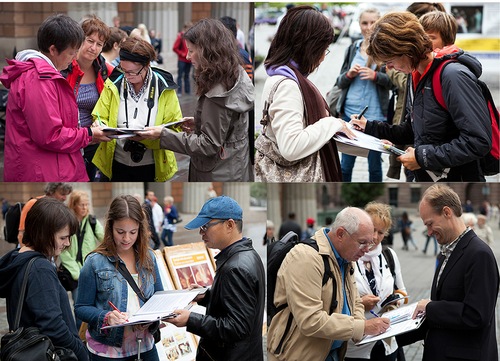 “We must stop these crimes!” exclaimed a Swedish man, before signing the petition. “Letting the world know about the Chinese regime's crimes against humanity is admirable!”

“Let's all sign this petition!” a Turkish man told his family after finding out about the Party's persecution of Falun Gong. “We cannot allow this atrocity to continue!”

A family of four Chinese tourists were very surprised to see the practitioners' display boards. When practitioners asked if they knew about the Party's crimes of organ harvesting, the father replied, “We always knew that the Party was bad, but we could never have imagined that they were capable of doing something this evil!”

After listening to a practitioner discuss the true nature of the Party, two members of the family agreed to withdraw from the Communist Youth League, an affiliate of the CCP.

The strong support and heartfelt encouragement from passersby made the Swedish practitioners all the more determined to continue exposing the persecution.

“My Rebellious Child Changed after I Searched Inward”