(Minghui.org) “The Chinese Communist Party will have to pay for what they've done,” a young Chinese man said at a Falun Gong activity held in Munich on August 17. At the event, local Falun Gong practitioners raised public awareness about the persecution in China and encouraged Chinese passersby to quit the Chinese Communist Party (CCP) and its affiliated organizations. A Chinese young man said, “I hope that we'll see the collapse of the Communist Party soon. I am glad to see so many German people sign your petition, speaking out against the persecution.” 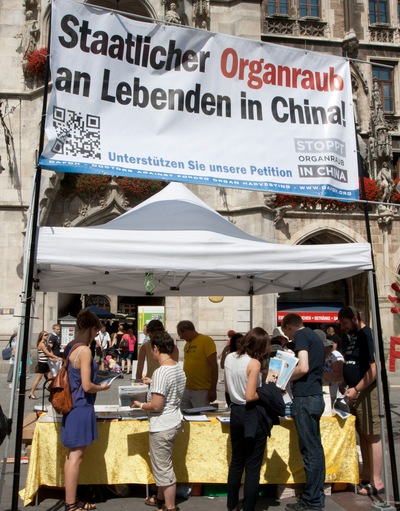 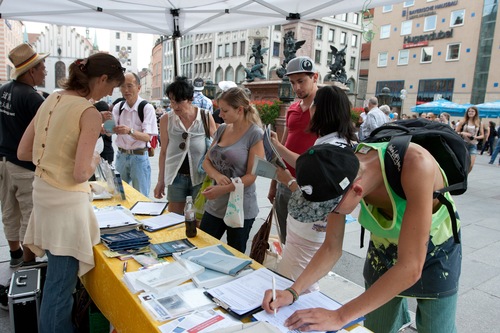 Many local people and tourists signed the petition, condemning the persecution and the Chinese Communist Party's organ harvesting atrocities. A German woman, who had lived in Guangzhou, China, was not surprised to learn about the brutal persecution and believes that the organ harvesting allegations are true. “I lived there for a while, so I know clearly how the Chinese Communist Party persecutes Chinese people,” she said. She signed the petition and said, “We cannot let this happen.”

Every day many Chinese tourists visit Munich, a well-known city in Germany. Many of them approached the practitioners' booth, talking to them and asking for more information. Quite a few Chinese visitors decided to quit the Chinese Communist Party after talking with the practitioners, and thanked them for helping them to do so.

A few Chinese students talked to practitioners for a long time. They all chose to quit the CCP organizations. One of them asked, “Are there any spies around here sent by the Chinese consulate?” Before practitioners answered, he continued, “What does that say about the China? You know a government is about to crash if its people have to worry about being spied on by the government.” The young man said he hoped that Chinese people will enjoy freedom one day soon.

Another Chinese student said, “To be honest with you, I was afraid of Falun Gong a few years ago. In China, we had no chance to learn the truth. Everything we heard about Falun Gong was negative propaganda. I was surprised to see that Falun Gong practitioners held an event in public, and so many Westerners are practicing it, including many well-educated people. The Chinese government claims that only non-educated people practice Falun Gong. I am very surprised [to see the real situation].”

This Chinese student continued, “I am glad that I have the chance to study overseas. I've seen many things, and my mind has broadened. I've changed my viewpoint on a lot of things.”