(Minghui.org) Despite the ongoing persecution in China, the peaceful spiritual practice of Falun Gong continues to grow and is welcomed all around the world. For many years, Falun Gong practitioners have taken part in local community celebrations, bringing the beauty of Falun Gong and traditional Chinese culture to a wider audience.

This year as well, Falun Gong practitioners participated in a number of local celebrations to commemorate July 4, Independence Day in the United States, and Liberation Day in Saipan. Numerous other events were held across North America over the past week as Independence Day was celebrated in the USA on July 4, and Canada Day was celebrated on July 1. 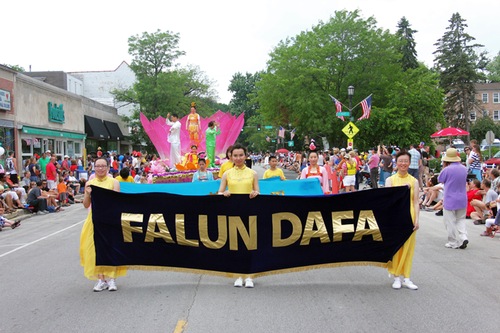 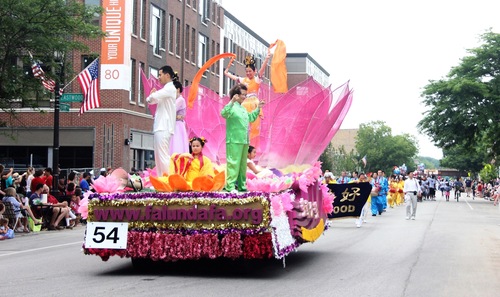 Evanston, Illinois, a major suburban city north of Chicago, is the home of Northwestern University. This year marks Evanston’s 150 th birthday. To commemorate this special anniversary, the Illinois State Governor, members of the U.S. House of Representatives, and other political leaders participated in the parade.

Immediately behind the float, a group playing Tang drums and another playing waist drums performed to the music “Falun Dafa Is Good.” Spectators applauded along the length of the parade route and were happy to accept informational flyers about Falun Gong. 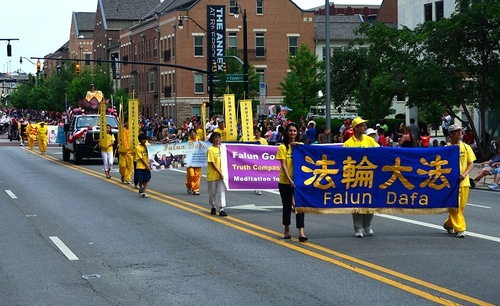 On July 3, Falun Gong practitioners participated in the Columbus Independence Day Parade, the largest Fourth of July parade in Ohio. The practitioners' procession, with bright, colorful banners and a lotus float, as well as the melodious Falun Dafa music, drew the attention of the spectators lining the parade route.

Dafa practitioners have participated in the Columbus parade since 1998. This is the 15th year they've taken part, and the Falun Gong procession, the only Asian group in the parade, has become part of the parade tradition.

After the parade, many people came forward to ask for information about Falun Dafa. People were happy to learn that the Falun Gong exercises are taught for free in front of the central library at Ohio State University every Wednesday, and at the Dublin Community Recreation Center every Saturday. 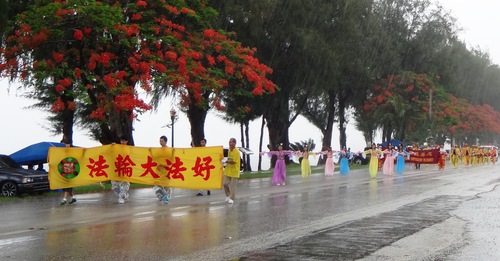 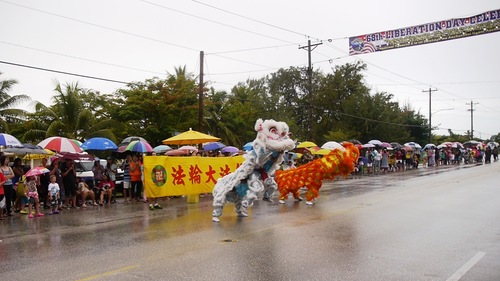 Even though it rained during the entire parade, Dafa practitioners' spirits were not dampened during Saipan's Liberation Day parade.

The Falun Gong procession consisted of lion dancers, waist drums, dancers dressed as celestial maidens, and a decorated float. Their contingent was led by practitioners carrying a large banner worded “Falun Dafa Is Good,” with celestial maidens dancing behind them to beautiful Dafa music. Following the dancers was another banner: “The World Needs Truth-Compassion-Forbearance.” The waist drummers followed. Completing the procession was a brightly-decorated float with colored ribbons, balloons and banners worded “Falun Dafa Is Good.”

When the procession reached the reviewing platform, the four-member lion dance team performed. Their unique and lively performance, accompanied by stirring drumming, won enthusiastic applause from the parade VIPs and spectators. Many people took photos to record the event.

Even though it rained throughout the entire parade, practitioners were pleased to take part again this year to help celebrate Independence Day and share the beauty of Falun Gong on Saipan.