Taiwan: Candlelight Vigil Held in Memory of Victims of the Persecution

(Minghui.org) On the evening of July 20, 2013, Falun Gong practitioners in Taitung, Taiwan, gathered in front of Seashore Park to stage a peaceful protest of the 14-year persecution of Falun Gong in China. They demonstrated the five gentle exercises of the practice and held a candlelight vigil in memory of those who have died as a result of the persecution. In a show of support, many passersby sat with them. 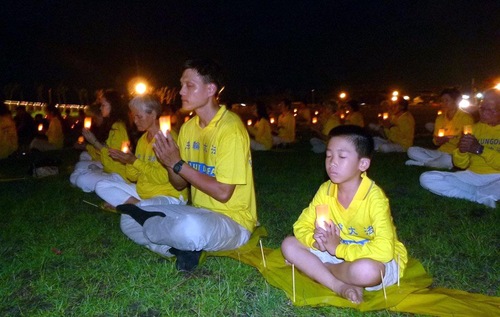 Seashore Park faces the Pacific Ocean, hosting streams of tourists year-round. As practitioners demonstrated the exercises, many tourists were attracted by the serene music accompanying their movements and slowed down to watch. Some expressed a wish to learn Falun Gong, and several followed along with the practitioners' movements.

Practitioners displayed many posters showing the benefits of the practice, as well as the savage torture methods used on practitioners in Chinese labor camps and prisons. Most people were especially shocked to learn that the Chinese communist regime has been secretly harvesting organs from imprisoned Falun Gong practitioners for profit—killing practitioners on demand and even extracting their organs while they are still alive.

Nearly every person who stopped to read the information signed a petition calling on the United Nations to help stop the brutal persecution of Falun Gong practitioners in China.

One of the passersby, Mr. Li, is a Christian. After he learned about the tragedy of live organ harvesting, he exclaimed, “That is unusually cruel! You should let more people know about it!” He said he knew that the Chinese regime suppressed many faith-based beliefs but was especially inhumane towards Falun Gong practitioners.

As evening began to fall, the practitioners lit candles and arranged themselves in the shape of a lotus flower. They quietly sat to honor practitioners in China who have been persecuted to death for upholding their belief in Truthfulness-Compassion-Forbearance, the main principles of Falun Gong.

For many years now, practitioners around the world have been calling attention to the Chinese regime's crimes against humanity. At the Taitung event, many of the practitioners' friends and family members came to sit with them to show their support.

The Chinese regime covers up its crimes with money and by intimidation, noted Ms. Lin. While most countries are focusing on trade, the torture of Falun Gong practitioners and the atrocity of organ harvesting from living practitioners are still ongoing in China. Ms. Lin believes if more people throughout the world stand up and condemn the persecution, the persecution would soon end and there would be hope for mankind.

Tseng Kuo-Jung, former president of the Taitung Youth Career Development Association, came with his family to show support. He said that he felt terrible seeing the photos of practitioners who have been abused and tortured by the Chinese regime.

Falun Gong is a peaceful practice that brings people health and improves their morality, said Mr. Tseng. He believes that ignoring the regime's despicable violence against the innocent is equivalent to condoning it. “If more people speak up against this crime, the persecution will soon end,” he said.

Ms. Wu is a manager in a construction company. She said that she admired the practitioners’ courage and strength to continuously expose the Chinese regime’s crimes, both in China and overseas. Ms. Wu also stressed that she was impressed with the practitioners’ peaceful and persistent way of pursing their goal of ending the persecution. “I admire you and I'm willing to side with you,” she said.

“Taipei, Taiwan: Spectators Drawn by the Thousands to Falun Gong March Marking 14 Years of Persecution in the Mainland ”

“Washington DC: Thirteen Members of Congress Send Letters of Support for Rally Against the Persecution of Falun Gong”